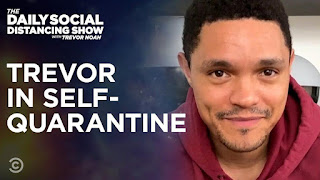 Here I am once again, trying to justify the amount of time I spend watching movies and TV shows by writing about them. I keep telling myself it’s not goofing off. I think we all know otherwise.

My regular must-watch TV includes The Daily Show with Trevor Noah. Four times a week, the South African comedian brings a very funny and very smart examination of what’s going on in the United States and the world. Since the pandemic, the half-hour show has expanded to forty-five minutes and is shot in Noah’s apartment. That extra time generally goes to a second interview with someone Noah finds interesting. Even with the awkwardness of talking with these guests remotely, I find most of them interesting as well.

I do miss seeing the Daily Show correspondents as much as we used to. They are an immensely talented group: Ronny Chieng, Michael Kosta, Desi Lydic, Dulce Sloan, Roy Wood Jr., Jaboukie Young-White and, on rare, welcome occasion, Jordan Klepper. Only Klepper gets  out of his home with regularity, often covering insane Donald Trump supporters. I worry about Klepper’s safety as he walks among these foaming-at-the-mouth zombies. I don’t worry that they might try to eat his brains. They clearly have no interest in brains.

The weekly Full Frontal with Samantha Bee is another must-watch TV show. She’s a delicious combination of sweet and acerbic, but she leaves no doubt that she’s smart, snarky and passionate about the news she covers and the issues she is passionate about. Beyond that we don’t see Bee every night, my only complaint is that she often devotes precious time to musical acts. I’d rather that time go to more news and commentary on that news. One half-hour of Bee isn’t near enough. I resent it when we get less of her because of these musical acts.

I stumbled across The Misery Index while channel surfing. Just one episode was enough to convince me it was my kind of show. I’m gonna go to Wikipedia for a description/history:

The Misery Index...developed for TBS premiered on October 22, 2019. The show, based on the card game "Shit Happens," is hosted by Jameela Jamil and stars the four members of The Tenderloins comedy troupe who also star in truTV's Impractical Jokers.

The show features two competing teams, each composed of a non-celebrity contestant and two members of the Tenderloins, who will "attempt to determine the ranking of hilarious and miserable real-life events - from getting fired to accidentally sexting your grandfather - on a scale of 1–100."

The card game was created by Andy Breckman, who also created/wrote the TV shows Monk and The Good Cop. He also developed the TV show. I am in utter awe of Breckman’s genius. Trust me on this. You need to watch The Misery Index.

Thursday night has three sitcoms I watched regularly. I wrote about B Positive recently and mentioned Young Sheldon in passing. I also watch The Unicorn, which is a big favorite of Barb’s.

Young Sheldon is always good for a few laughs and, sometimes, some updates on the life of Older Sheldon. Fans have remarked that what has happened in this show doesn’t match the continuity of what was seen in The Big Bang Theory. Some of the past history mentioned in the latter was dark so, if it does show up in Young Sheldon, it’ll be interesting to see how it’s handled.

The Unicorn starts the wondrous Walton Goggins as a widowed father of two daughters starting to date again. His daughters are really well-written. His neighbors are mostly well-written, but sometimes the humor there gets a little too needy.

Something not addressed (at least not to my satisfaction) is the effect of the father’s sexual activities on his daughters. He’s had several affairs over the two seasons of the show. They definitely know about one of them since the lady in question slept over. This is not a subject that should be glossed over.

The standout episode of The Unicorn to date doesn’t center around the father. In “It's the Thought That Counts,” a white neighbor gives a toy gun to the son of a black neighbor. The parents of the kid react in horror to this and it’s a fear the white neighbor does not understand because this isn’t traditionally a concern for white parents. It’s a powerful episode that teaches as it entertains. I recommend tracking it down and watching it.

I watched the series finale of WandaVision and thought it ended on a satisfactory note that allowed for further stories with, at the very least, the Scarlet Witch. Most of the complaints I read about it consisted of fans moaning about the show not delivering on the things they had wanted to see, like appearances by Mephisto and the X-Men. Things they were never promised.

SELF-CONGRATULATORY NOTE: I originally used a different word that “moaning” in the above paragraph. I changed it to a gender-neutral word that wasn’t gender-insulting. I may not always catch myself on stuff like this, but I’m trying.

Elizabeth Olsen deserves award nominations for her performances as Wanda, something that can also be said about Paul Bettany as Vision and Kathryn Hahn as Agnes/Agatha Harkness. In the hopefully near-future of the Marvel Cinematic Universe, I would love see more of Teyonah Parris (Monica Rambeau), Randall Park (Jimmy Woo) and Kat Dennings (Darcy Lewis).

The presence of Martin Freeman got me to watch the first episode of Boy Meets Girl, a four-episode British TV series from 2009. I came across it while surfing on Amazon. Here’s a one-line summary from epguides.com:

A freak accident causes two strangers, a man and a woman, to switch bodies.

I’m on the fence on whether or not I’ll watch the remaining three episodes. There are many gender change movies and TV shows and few of them stand out. However, with this show, I’m intrigued because it’s also a social standing change movie. Freeman’s character is a a blue collar worker in big trouble with a loan shark. He switches with a well-off newspaper reporter (Rachael Sterling) who writes fashion/horoscope fluff and is living with her equally well-heeled boyfriend. Watching the other three episodes to see how their story plays out does interest me. If and how soon I watch them depends on what else is available.

I’ll have many more comments on movies and TV shows coming your way soon. I want to be able to continue to declare my cable/streaming payments as business expenses.

Posted by Tony Isabella at 8:32 AM