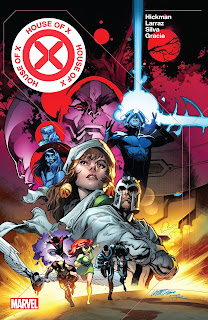 Since I’m not writing anything for Marvel or DC, I have little hope of ever becoming fluent with the current states of their respective universes. Should I ever resume writing for them, that won’t be a major obstacle. I’m a quick study, especially with editors who can bring me up to speed and elucidate what they’re expecting from me. Which is neither here nor there.

When I read comics from those companies it's almost always because a friend has recommended them to me. I gravitate towards collections because I prefer a great big chunk of story over individual issues, especially at a time when those individual issues seem like they’re merely taking up pages until the writers get to whatever big story they want to tell.

One of my transgender friends is a big fan of the X-Men, which is not surprising given the alienation and struggle for acceptance or survival that have been part of the X-Men since Stan Lee and Jack Kirby created them. You don’t have to be a scholar to see how that appeals to any number of readers.

House of X/Powers of X [Marvel; $49.99] by the “visionary writer” Jonathan Hickman and artists Pepe Larraz and R.B. Silva was truly a mixed bag for me. I’m not a big Hickman fan, but I recognize the quality and thoughtfulness of his writing. I very much liked this concept of sentient mutant island Krakoa becoming homeland for all the Earth’s mutants. I loved the political maneuvering attendant on Krakoa creating its place among the planet’s nations. And I loved the ramifications of this new global landscape. When a super-hero series becomes more than big punch-ups and destruction/death on a planetary scale, I’m gonna give it a chance.

What I didn’t like, and this is by no means all on Hickman, was the far-ranging “future of mutantkind” story running concurrently with what the modern story. I have rarely been a fan of future stories, except when they were never said to be *the* future of the heroes. I loved the “Superman of 2099" stories that ran in Superman comics in the 1960s. I didn’t care for the “Adult Legion of Super-Heroes” story that ran in the same era. Perhaps this future X-Men story is not meant to be canon, but it seemed like it was meant to be such. Why continue to read X-Men comics if I know what’s coming?

Oh, and, just to be even more grumpy, I don’t like the overuse of alternate universe versions of characters. I also don’t buy for an instant that Moira MacTaggert has been some kind of secret mutant
who dies and reincarnates over and over to help chart the future of mutantkind. That one made my eyes roll.

I plan to continue reading X-Men as my library provides me with the collections. I could never follow this ongoing story on an issue-to-issue basis. I’d previously read and enjoyed collections of the Marauders title and mostly enjoyed the one X-Factor collection. In the case of X-Factor, my experience was diminished by the presence of the always annoying Mojo.

My over-all take at this early stage of reading X-Men again is to applaud the big concept without buying into it entirely. If you’ve got the energy/patience to follow what is functionally a separate, multi-title Marvel imprint, you might enjoy these comics. 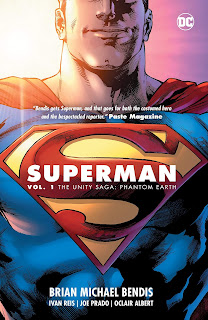 Brian Michael Bendis is one of the best writers in comics and has been for many years. I generally like his work and definitely like him personally. He’s a damn good man. Which is why it pains me that I don’t like his now-concluded work on Superman.

Yes, I know Bendis put in a couple years on the Superman titles and that he’s not writing Superman at the moment. For reasons unknown to me, I’m just getting around to reading his Superman stuff now, via collections from my local library system.

Why am I reviewing these Superman comics now? Because some of why I don’t care for them is worth writing about. As of this bloggy, I have read The Man of Steel [DC Comics; $17.99] and Superman Vol. 1: The Unity Saga: Phantom Earth [$17.99].

Almost every time a big-name writer takes over the Superman books, they want to reinvent the character in some manner. Of course, the character can and needs to be brought into whatever modern era this is happening in. However, these writers need to consider what effect their “improvements” will have on the Superman legacy and on the DC Universe titles that revolve around Superman.

Back in the 1980s, John Byrne dumped Superboy, Supergirl and Clark Kent’s mild-mannered personality. His Superboy call screwed over the popular Legion of Super-Heroes. His Supergirl call led to the inevitable creation of a much more complicated and less interesting new Supergirl. I wasn’t quite as put off by Clark Kent getting more manly, but I was fond of what Jules Feiffer once pointed out as the main positive of the Superman/Clark dichotomy. That was the idea that, underneath our cheap suits, we could all be Superman. That idea has appealed to generation after generation of Superman fans. To a large extent, I think it’s what made Superman human and therefore relatable to readers. Sadly, I doubt we’ll ever see that dichotomy again. Its absence has become too ingrained with comics readers and media viewers of Superman.

What I disliked most about the Bendis run on Superman was his massive change to Krypton and its history. My favorite version of Krypton is the one where it’s a beautiful planet of tomorrow with amazing advances in science and, sadly, with the arrogance that comes when powerful people refuse to address potential dangers. This always reminds me of how mankind has largely dropped the ball on climate change. I don’t think Krypton’s leaders could have prevented the tragic destruction of their people and planet, but there’s a lesson to be learned from their hubris.

Breaking from that history, Bendis instead chose to have Krypton murdered by a powerful xenophobe. It’s an inelegant embrace of the Hollywood excess that prefers the eye-candy of mass destruction to more meaningful plot development. Krypton goes from being a tragedy to being a crime victim. Indeed, much of what I find fault with in the Bendis run is a devotion to Hollywood blockbuster theories of storytelling. Make it big and bloody.

While I’ll give Bendis credit for naming some of the thousands of citizens of Kandor who were murdered so he could show how brutal his new villain was, it wasn’t enough. Those characters were still reduced to faceless statistics.

As for the rest of what I read in these two collections, I liked that Lois Lane was treated with respect. I didn’t like the break-up of the Kent family as the hands of a somehow alive Jor-El who is just as arrogant as the Kryptonian scientists who failed to heed his warning.

Because it comes at the very end of Superman Vol. 1, I have yet to form an opinion of the surprise aging of Jon Kent into a teenager. I liked some previous stories featuring Jon as a pre-teen. I think there was untapped potential in stories of that type. I’ll reserve further judgment until I’ve read more tales of the older super-son.

That’s a wrap for today’s bloggy thing. Stay safe and stay sane as we deal with the enormous problems of the world outside out beloved comic books. I’ll be back soon with more stuff.

Posted by Tony Isabella at 5:04 PM