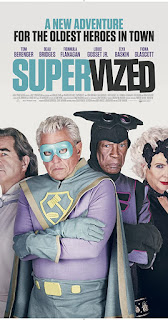 Continuing my series of blogs commenting on the movies and TV shows I have watched recently. Or, if you prefer, my ongoing attempt to monetize my goofing off by declaring my cable and streaming costs to be legitimate business expenses.

I watched two episodes of Law and Crime Daily. This half-hour show reports on various ongoing criminal trials. The episodes I viewed were split into two stories. The main one was on jury selection in the trial of Derek Chauvin, the police officer who murdered George Floyd. The other one involved a woman in another murder trial who wanted the prosecution to refer to her by the last name of her co-defendant in the trial. The show was far less sensational than it could have been, but too tedious for continued watching.

I have been working my way through the final season of Duck Tales, which has been one long interconnected story featuring a downright breathtaking cast of characters. The quality of the writing and the voice acting is remarkable. The tying together so many other Disney cartoons into one universe is that kind of thing E. Nelson Bridwell and Roy Thomas did for DC and Marvel Comics. I have five episodes to go before getting to the extra-length series finale. Maybe I’ll give myself a binge holiday to watch them.

I also need to binge Superman and Lois. I watched and enjoyed the hour-and-a-half pilot episode, but haven’t returned to the series yet. Those un-watched episodes are waiting for me on my DVR, but, with the exception of Black Lightning, I haven’t been compelled to watch most DC/CW shows.

I’m watching Batwoman because I like some of the cast members, but the stories don’t work for me. I will doubtless discuss Batwoman in a future column.

I made the conscious decision to neither watch nor record Flash and Supergirl. I haven’t decided about Legends of Tomorrow. However, given that I didn’t even record the last several episodes of last season, it’s not looking great for Sara Lance and crew. On a more positive note, I am very much looking forward to the second season of Stargirl. After Black Lightning, it’s my second favorite DC/CW show. Kudos to Geoff Johns, the cast and the writers.

I heart Bob Hearts Abishola, but I’m about three episodes behind. The unlikely romance between the head of a Detroit sock company and a Nigerian nurse is funny and heartwarming. The superior supporting cast adds to the enjoyment. There are some really good sitcoms on TV and streaming services these days, but, for my money, Bob Hearts Abishola is the best.

Saintly Wife Barb and I have been watching The Masked Singer since its debut. Now in it’s fifth season, the competition show suffers from a surfeit of gimmicks. While I enjoyed Niecy Nash filling in as host for an ailing Nick Cannon, other aspects of the series are just pitiful. That’s beyond my stomach churning whenever anti-vaxxer Jenny McCarthy opens her mouth. An mysterious masked rooster who gives clues to the contestant is just plain annoying. Adding a wild card contestant in later match-ups didn’t do anything for me either. I will give The Masked Singer props for being so audacious as to have Kermit the Frog as a contestant.

I tried to watch Game of Talents because of host Wayne Brady. Even he couldn’t get me to continue watching the unscripted variety show in which contestants try to guess performers' hidden talents, based on first impressions and clues. Appalled by the simplicity of the clues and, honestly, the concept of the series, I didn’t even make it all the way through the premiere episode.

My friend Martin Arlt mentioned Kim’s Convenience on his Facebook page. Although the series has ended, his obvious love for it made me check it out. I’m only four episodes into the first season, but I’m hooked.

Based on the 2011 play by Ins Choi, the series is about a Korean- Canadian family with a convenience store in downtown Toronto. The humor and family drama plays on multiple levels. There’s the day- to-day operation of the store. The rift between the father and son. The wife’s understated comedy. The daughter’s struggle for equality and recognition. The son’s boss who hilarious tries to conceal her obvious lust for the young man. Great cast and writing.

The show may have ended, but, at least I have five seasons to look forward to. I recommend Kim’s Convenience to one and all.

Amazon Prime kept recommending the 2019 movie Supervized to me and, eventually, I caved. In writing about this film, I must warn you there will be some MILD SPOILERS.

Here’s the IMDb summary: Four aging superheroes in a retirement home in Ireland come together for one last hurrah.

Directed by Steve Barron from a screenplay by Andy Briggs and John Niven with additional writing from Roger Drew and Ed Dyson, this is designated as a comedy. However, it’s dark and dire in places and movingly human drama in others. The cast is impressive with solid performances by Tom Berenger, Beau Bridges, Fionnula Flanagan, Fiona Glascott and Louis Gossett Jr.

Age has caught up with these retired heroes and the effect of that on their powers is often very funny. But there’s a shadow looming over the laughs. If the authorities deem the heroes’ powers pose a threat to themselves or others, they have the means to strip those abilities from the retirees. This treatment is rightfully portrayed as a terrible development, much like diseases like Alzheimer’s and dementia can diminish those who suffer from them.

IMDb gives Supervized five out of ten stars while Rotten Tomatoes grades it at 44%. My estimation of the film is a bit more generous. It’s got some fine moments, both comedic and serious. It makes you care about the retired heroes. It delivers a satisfying ending. I wouldn’t put it up for awards, but I do think it’s worth watching. It’s not a bad way to spend ninety minutes.

Since I’m still watching way too many movies and TV programs, you should can expect to see another one of these “watching” columns in the near future.

Posted by Tony Isabella at 7:36 AM