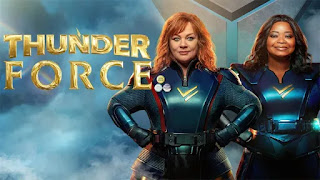 Among my too long list of obsessions is the urge to see every darn super-hero movie that has been made. This is not as dangerous as it could be. For example, I have no interest in seeing Zack Synder’s films or animated versions of such brutally soulless comic books as The Killing Joke. But, yeah, with those exceptions, if a movie has super-heroes in it, I’ll watch it.

Recently released on Netflix, Thunder Force (2021) was written and directed by Ben Falcone, the husband of Melissa McCarthy, who, with Octavia Spencer, is one of the two members of the title super-team. Other actors include such favorites of mine as Jason Bateman, Bobby Cannavale and Melissa Leo. Players who weren’t on my radar before this, but whose performances I loved were Taylor Mosby and Marcella Lowery. Falcone has a small role as an ill-fated henchmen with the appropriate name of Kenny. Here’s the summary from the Internet Movie Database:

In a world where supervillains are commonplace, two estranged childhood best friends reunite after one devises a treatment that gives them powers to protect their city.

I wasn’t expecting much from Thunder Force, but it was a whole lot more entertaining than I expected. Time is spent showing the leads as they grow up together and move apart. Those warm moments are a nice contrast to the broad and sometimes gross comedy. Some super-hero bits are hilarious. At its core, this movie is about heroism and friendship.

This is a shorter review than I had originally intended to write. I made the decision to avoid spoilers because I wanted you to come to this movie without knowing too much about it. As I so often say when I write about films, Thunder Force won’t win any awards. What it will do is deliver a fun and satisfying hour-and-a-half’s worth of entertainment. That’s good enough for me. 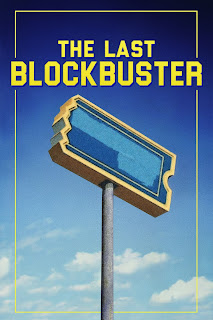 The Last Blockbuster [2020] is a documentary currently streaming on Netflix. It’s the history of the last remaining Blockbuster Video store. That store is still operating in Bend, Oregon.

Though I’d known of the existence of this store, I stumbled across the documentary while channel-surfing, an ever more time-consuming activity, what with the many streaming networks available here at Casa Isabella. Directed by Taylor Morden and written by Zeke Kamm, this was an absolutely riveting hour-and-a-half spotlight on what was once an icon of American pop culture. It transported me back to
my own frequent visits to various Blockbuster stores, visits which started almost as soon as I bought my first VCR.

Owner Sandi Harding is the star of the documentary and, through her eyes, we see how important this family business was to not just her family but her community. There’s a wonderful scene in which past employees come to the store for an annual dinner. I think I got a little teary at how special that must be.

There are clips from celebrities talking about their experiences getting videos from or working at Blockbuster Video. Kevin Smith.Brian Posehn. Adam Brody. Ron Funches. Ione Skye. Cranky naysayer Lloyd Kaufman is included as well.

My own Blockbuster memories went hand-in-hand with my watching this documentary. Before I got married, I used to come home with a half-dozen videos of all kinds. I used to buy dozens of used VCR tapes. My schedule didn’t allow me to go to actual movie theaters all that often, but those tapes and bags of microwave popcorn in a darkened living room was a reasonable approximation of that experience for the times.

The Last Blockbuster gets my high recommendation. It even got me to thinking about visiting Bend, Oregon in the hopefully near future. Maybe even rent a movie and a VCR or DVD player while I’m in town. 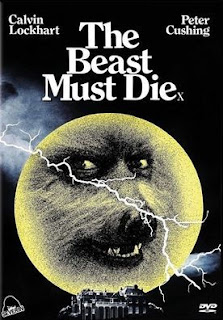 Saturday night movies with Svengoolie is always a good time. While I don’t get to enjoy his show every week, I usually manage to watch a couple times a month. Recently, I watched his presentation of The Beast Must Die (1974), a British film from Amicus Productions and directed by Paul Annett. Written by Michael Winder and based on the short story "There Shall Be No Darkness" by James Blish, this movie is a, well, let me crib from the Internet Movie Database to set it up for you:

At the beginning of the film with narration. This film is a detective story--in which you are the detective The question is not "Who is the murderer?"--But "Who is the werewolf?" After all the clues have been shown--You will get a chance to give your answer. Said but not written on screen, directly after above quote: Watch for the werewolf break.

Wealthy big-game hunter Tom Newcliffe [played by Calvin Lockhart]  invites five people to his remote mansion and proclaims one of them is a werewolf. All the summaries say six people, but the only way to reach that number is to count Newcliffe’s wife Caroline [Marlene Clark] and there’s no indication the hunter considered her to be a suspect.

The actual suspects include archaeologist and lycanthropy expert Professor Lundgren [Peter Cushing], artist and ex-con Paul Foote [Tom Chadbon], disgraced diplomat Arthur Bennington [Charles Gray] and pianist Jan Gilmore and his wife Davina [Michael Gambon and Ciaran Madden]. Rounding out the cast we have Newcliffe’s associate Pavel [Anton Diffring]. With Pavel, the hunter has surrounded his mansion and its grounds with so much surveillance equipment that I thought it was unfair to the werewolf.

The Beast Must Die reminded me of a TV movie to such an extent that I was surprised to learn it was a theatrical release. The action is adequate at best with Lockhart going into overacting overdrive for most of the film. Lockhart is black, making for less than optimal for scenes shot in the day with special filters to mimic the night. There are a handful of chilling scenes throughout the movie, enough to make it worth watching once. Inserted against director Annett’s wishes, the “Werewolf Break” is laughably off-key.

Svengoolie makes the movie for me. Unless I was writing a book on werewolf movies, certainly a distant possibility, I wouldn’t have watched it otherwise. 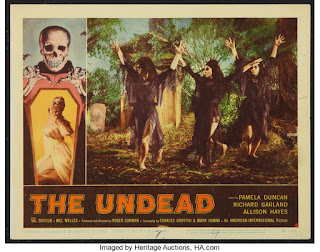 A beautiful woman is sent back in time via hypnosis to the Middle Ages where she finds she is suspected of being a witch, and subject to being executed.

The Undead is a pretty good shock ending comic-book story. I could visualize the panels and pages as I watched it.

Duncan is excellent in the dual roles of modern shady lady Diana Love and her virtuous medieval counterpart Helena. Garland is the knight who loves Helena, despite her being pronounced a witch and
doomed to execution. Hayes is best known for being that attacking 50-Foot Woman, but she’s likewise excellent as actual witch Livia. Dufour’s scientist is the scariest character in a movie that also features Lucifer.

Quintus Ratcliff is a soulless investigator who sends Diana back to her past life as Helena. He sends himself back in time as well. He wants to see if Helena will sacrifice her (for her) present life to bring into being all the other lives that she will live. Centuries of women with lives of their own. Ratcliff only wants to see what happens, not giving a rodent’s behind for Helena or the weakening Diana. He’s an arrogant son of a bitch who doesn’t even flinch at bantering with the Devil.

Helena does choose to die in her medieval time so Diana and all her future selves will live. In modern times, Diana recovers and is so moved by Helena’s sacrifice that she vows to turn her life around and be worthy of that sacrifice.

The shock ending? Since Ratcliff was mentally linked to Helena, he has no way of getting back to his own time when she dies. With the Devil laughing, the scientist realizes he is trapped in the past. He’ll live his life and die before he was born. A fitting fate for the arrogant man.

I had never heard of The Undead before I watched it on Svengoolie. Now it’s a film I want to see again and which I recommend to all of you. And, yes, I’m available to adapt it into a comic book.

Posted by Tony Isabella at 6:11 PM