THE JOKER WAR AND OTHER QUESTIONS 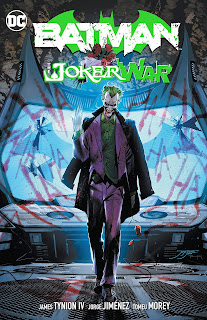 Every now and then, as I read praise for comic books that strike me as not praiseworthy, I ask myself what I am missing. Sometimes, I request collections of those comics from my local library system in the honest hope I’m missing something worthwhile. I’m such a crazy  optimist, I am.

It’s entirely my bad that I didn’t realize Batman Vol. 2: The Joker War by James Tynion IV, Jorge Jimenez and Tomei Morey [DC Comics; $29.99] was the second volume in the Joker War series. My library didn’t designate it as such online and I didn’t think to check for myself. As a new reader to the “event”, I found myself pretty much lost as to what had gone before. However, that doesn’t let DC off the hook because...

...there should have been a “what has gone before” summary in the front of this $30 hardcover. That’s not a low price. There was a bit of hype copy on the back cover, but it didn’t go into a whole lot of detail. So I was behind from the get-go.

The positives of this book are that the writing and art are good. Not great, but good. As readers know, I find “good” to be perfectly acceptable in my entertainment. Not everything can be the greatest of all time or even a contender for that.

One of the minor negatives is that several key events happened in comics not included in this volume. They happened in other titles tied into the main Batman titles. That’s storytelling surrendering to marketing, something that rarely produces good results.

The major negative is the story itself isn’t interesting. It’s just more of the ever grimmer, never-ending Batman/Joker battle. Bereft of imagination and originality, DC Comics keeps going to the same story over and over again. I suppose the company thinks that having the Joker succeed in stripping Batman of his wealth and reputation and making Gotham worse than before is groundbreaking. Really, it isn’t. It’s merely a continuation of DC’s lack of understanding of the super-hero genre.

The super-hero genre was created as an optimistic genre. Terrible situations and villains plagued mankind on small and large scales. The super-heroes made things better. They didn’t cure all the ills.
They just made things a little better.

What’s better after this “epic” story? Gotham’s is in worse shape than before. The Joker remains free, sure to slaughter innocents as he always does. Batman’s ability to help is diminished. He does promise to be less of a dick to the heroes who have followed him so loyally, but their ready acceptance of his promise is akin to some battered spouse convincing themself this time their abuser actually will change and never hurt them again. I’m not buying it.

Too many people at DC Comics and, in truth, almost every publisher publishing super-hero comics, appear to be ashamed of the glorious optimism of the super-hero genre. They seem to find it childish and make these increasingly dark attempts to elevate it into what they consider a more adult presentation. That sometimes works well for an individual series like Watchman or The Boys. It’s depressing as Hell when a company with dozens of connected titles drag every one of those titles into the darkness.

I do plan to read the Batman comics that preceded this collection and the spin-off issues that connect to it. If that makes this more palatable to me, I’ll write about that. I’m not optimistic, but I am open-minded. 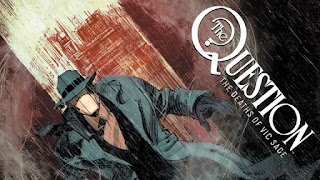 I wanted to love The Question: The Deaths of Vic Sage, a four-issue series from DC’s Black Label imprint [$6.99 per issue]. Written by Jeff Lemire, whose work I generally enjoy, with moody visuals by artists Denys Cowan and Bill Sienkiewicz and evocative coloring by Chris Sotomayor. All the elements were there.

Alas, this take on the Question fell afoul of something that bugs me about too many current takes on classic comics characters. It’s the idea that writers must enhance the characters somehow. They’ll make them more powerful, mistaking that for character development. They’ll clumsily weld aliens or the supernatural to the origins of the characters. And, really, as I see it, all they really have to do is tell great stories with these characters.

There was potential greatness in this series. A opinionated radio host struggling to help a city drowning in corruption and violence.Politicians using the situation to increase their own power. Those unwittingly drawn into the corruption and violence. The beleaguered citizens in need of a hero to show them the way to take back their city from their corrupt leaders. All of that was there, but pushed into the background by the mumbo jumbo.

Maybe my distaste for this is a generational thing, but I ascribe it to my firm belief that characters and concepts should have core values, and that those values should inform the stories featuring those characters. There’s a shock value to upending those values, but it fades quickly.

Creator Steve Ditko’s Question wasn’t a fully developed character. Denny O’Neil’s take wasn’t particularly respectful of Ditko’s work, but it was interesting and it did lay some groundwork for possible future Question series. I also found Renee Montoya’s assumption of the role intriguing, but liked her better as herself and not just the second Question.

Many of you will likely enjoy The Question: The Deaths of Vic Sage. I don’t expect my readers to necessarily share my views on comics like this. I’m good with that. 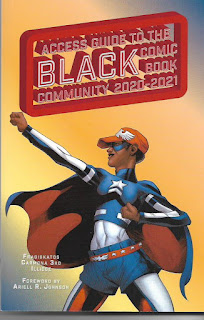 The Access Guide to the Black Comic Book Community 2020-2021 is a terrific resource for comics fans and professionals interested in expanding their knowledge of that vibrant community. Published by Anyone Comics [$9.99], proceeds of the book will go to the Dwayne McDuffie Fund.

The book is divided into several useful chapters: Comic Books and Graphic Novels, Publishers, Comic Book Shops and Conventions. It’s not just a book of lists. A tremendous amount of information can be found in its pages. I know I’ll be referring it to it frequently. I hope my copy holds up until the next edition is published.

Kudos to publisher Dimitrios Fragiskatos, designer George Carmona 3rd and editor Joseph Illidge. They packed a lot into this 160-page book. I highly recommend it to all fans and serious students of the current comics scene because you can’t fully appreciate that scene without including the black comics community. 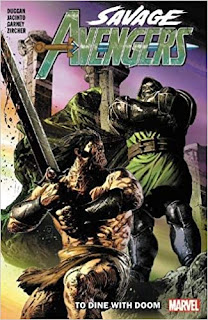 When I read Savage Avengers Vol. 1: City of Sickles by writer Garry Duggan and artist Mike Deodato [Marvel; $15.99], it didn’t float my boat. I couldn’t figure out if its weird roster of “heroes” were an actual Avengers group or not. Conan, Elektra, Punisher, Wolverine and some Venom symbiote who was confusing to me. This happens when editors and writers don’t give their new or returning readers a leg up as to what’s gone before. I did think bringing in the time-lost Conan’s ancient enemy Kulan Gath was sort of cool. I also decided these characters were not a branch of the Avengers. That seems to have just been a marketing tool.

I enjoyed Savage Avengers Vol. 2: To Dine With Doom [$19.99] much more because, once the Punisher and the others were written out, I was able to enjoy the absurdity of the crazy team-ups more. There was Conan, Black Widow and Daimon Hellstrom going up against human traffickers. Then there was Conan teaming up with Doctors Doom and Strange, which was good goofy fun. Especially when Doom put Strange into a special suit of armor.

Conan is a big goof in this series. That works for me. I’ve grown bored of typical Conan adventures, but Conan in a modern world that he imperfectly comprehends is hilarious. Don’t get me wrong. There was some solid super-hero stuff in this second volume. High marks to returning writer Duggan and artists Kim Jacinto, Ron Garney and Patch Zircher.

I’m not nominating this series for any awards, but I like it well enough to request the next volume from my library. And if Duggan is taking requests, I’d like to see Conan paired with Mister Fantastic and the Invisible Woman.