BOZO WITH A GUN 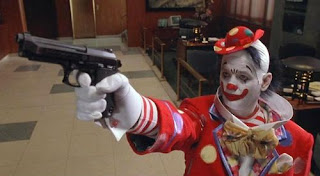 I’m going to try to keep today’s bloggy brief and to the point. Cosplayers, especially cosplayers wielding realistic-looking and realistic-sounding firearms, should not point and “shoot” them at children. Or at anyone else. Regardless of age. In fact, unless they are performing a stage presentation as part of a competition, they should keep their bang-bangs holstered.

I had a great time on Free Comic Book Day. However, the experience was marred by a clueless man-child in a Snake-Eyes costume, a jerk who took enormous delight in exactly the behavior I outlined above. I thought he was a stupid kid until he took over the mask covering his entire head. He appeared to be in his late twenties or early thirties. Old enough to know better.

We live in an age when shootings of children and older folks are a daily element of the news. A few evenings ago, the lead stories on a Cleveland news station were the shooting of teenagers on the east side of the city and the shooting of an elderly woman on the west side of the city. The elderly woman lived on the street I lived on in the late 1970s. The councilman of the west side ward was on the east side during the aftermath of the first shooting and got back to his ward to learn of the second shooting.

This is the world we live in. It’s a world when innocent children get shot and killed with real guns. It’s a world where the police have to make split-second decisions and often make bad and tragic choices. It’s a world where, even at a Free Comic Book Day event, a sensible person would recognize the potential danger in firing realistic-looking and realistic-sounding fake guns while covered in black from head to toe.

The Free Comic Book Day events were being held in the store’s large  parking lot, completely visible to the street and to any vehicles driving by the busy location. When I saw Snake-Eyes fire his guns at children, I waved him over. I told him it was inappropriate to be aiming his fake guns at and then shooting at kids. He took extreme offense. How dare I tell him what he could and couldn’t do? I told him he was being an asshole.

He told me to keep my politics to myself. This puzzled me. Because how many political parties advocate shooting at kids? I mean, yeah, the Nazis and ISIS and a few others, but, really, requesting that someone not aim and fire even fake guns at children is some sort of political thing? Really?

I spoke to the owner of the store. I explained what I had seen and why I thought it was inappropriate. The store owner said he agreed with me and would talk to the cosplayer.

After Snake-Eyes saw me talking to the owner, he resumed and even increased his inappropriate behavior. Of course, he only did this when the owner wasn’t around, so, on top of being an asshole, he’s sort of a coward.

I’ve been asked to return to this store for next year’s Free Comic Book Day event. I’d like to return, but I’m going to insist on one change to our previous agreement. It’s this:

All realistic-looking and realistic-sounding firearms must be kept holstered during the event.

This is common sense.

It doesn’t make mockery of the real gun violence that injures and kills so many children.

It doesn’t set a bad example for impressionable children.

It makes it that much more unlikely that a police officer who does not know from G.I. Joe makes the wrong decision.

I’m about as minor a celebrity as they come. But, whenever I can, I will use that wee celebrity to advocate for what is right. If it means I don’t come back to next year’s FCBD event, then I can and will accept that disappointment. There are other invitations and, in the worst case scenario of no store inviting me to be a guest on Free Comic Book Day, I gain a day of writing or relaxation. It’s a no-lose situation for me.

Snake-Eyes won’t like this blog. I’m sure he won’t be alone in not liking this blog. Ask me if I care. In the interest of propriety, I offer no suggestion as to where they can holster their toy guns.