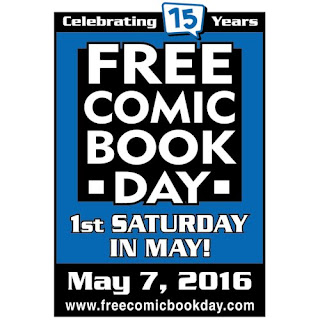 Free Comic Book Day celebrated its 15th anniversary last Saturday. It’s Christmas in May for comics fans and civilians alike who are fortunate enough to be near a participating comic-book store. Many of the shops invite a comics guest or two to add a little something extra to their celebration. This year, I was the guest of The Toys Time Forgot in Canal Fulton, Ohio.

Canal Fulton is a lovely small city which grew up around a canal lock on the Tuscarawas River. With a population of between five and six thousand, it boasts wonderful old buildings and homes, many restaurants and shop, canoe rentals for those who want to explore the Tuscarawas, and, of course, The Toys That Forgot.

Though I was under the weather on Saturday, something I managed to hide fairly well, I was excited to be part of the festivities. My companion, driver and security for the event was my other daughter Giselle aka my daughter Kelly’s best friend since the two of them were the cutest kindergarten kids in Medina. Giselle is what Kelly calls a “daywalker.” somewhat outwardly “normal” but a fan of comic books and other related things.

The Toys Time Forgot had set up several tents in their parking lot for me and other guests, for other local businesses and for their vast selection of Free Comic Book Day comic books. The weather was terrific. There were already several cosplayers on hand and there was already a long line of eager folks waiting for the FCBD events to begin.

The store itself is a modern-day wonder. It’s packed - and densely packed at that - from ceiling to floor with more great old toys and comic books and cool stuff than you can imagine. If you stopped to look at any section of the store, just considering what was directly in front of you, you’d see thousands of dollars of wonderful things. It took a great deal of will power for me not to spend thousands of dollars there. Well, that and the fact I didn’t have thousands of dollars.

I was in the guest tent with artist Ed Griffie, who was giving away free coloring book pages to kids, and fantasy artist/novelist Shana  Schottenstein. Griffie was terrific with the kids and Schottenstein was showing an incredible metal sculpture in progress of a dragon character from her novel.

There was free coffee and donuts for the morning crowd, followed by free pizza and water bottles later in the day. A caricature artist was doing free drawings for the fans. Philbee the Clown made free balloon animals for the kids, as well as some interesting balloon head gear. There were photo opportunities with various cosplayers. It was a grand party.

I answered questions about my work, about writing in general, about some of the legendary comics creators with whom I was lucky enough to work. The fans and I talked old comic books, new comic books, TV shows and super-hero movies. Good times.

The one thing I didn’t do was check out the free comic books. But, as usual, my friends at Stormwatch Comics will be sending me all of them. Will this be the year I actually manage to read and review all those comics? Hope springs eternal.

I had planned to be at the event from 11 am to 4 pm. Unfortunately, it started raining around 3 pm, making the tent untenable. Even so, I managed to sign a few more comics and pose for a few more photos before leaving.

The Toys Time Forgot put on a first-rate Free Comic Book Day event. I want to thank Dan Hire and Jami Meeker for their hospitality on Saturday. They’ve asked me to return in 2017 and, assuming we can work out some details, I will be back. In fact, next year, I should have some additional Tony Isabella items on sale. 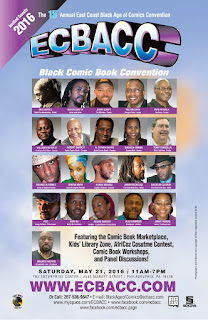 My next public appearance is the East Coast Black Age of Comics Convention in Philadelphia. It’s one of my favorite conventions,  dedicated to comics and creativity by, featuring and for people of color. I am honored and so grateful to have been accepted so warmly by this great community.

The event starts with the 15th Annual ECBACC reception and the 11th annual Glyph Awards ceremony on Friday night, May 20, at 6 pm, at the African-American Museum, 701 Arch Street. ECBACC itself is on Saturday, May 21, 11 am to 7 pm, at the Enterprise Center, 4548 Market Street. I’ll be selling Black Lightning Volume One and, if past ECBACCs are any indication, spending whatever I make with the other creators exhibiting at the show.

This year’s guest list includes Eric Battle, Jerry Craft, Professor William Foster III, N. Steven Harris, Jamar Nicholas, Alex Simmons and many others. I’m looking forward to seeing all these creators. Likewise, I’m excited about learning about and meeting creators with whose work I’m not familiar. ECBACC has always been a learning experience and I’m doing my homework before I arrive at the event.

I’ll be appearing on a writers panel - Writing Challenges and How to Break Them - at 11:15 am. The moderator is that terrific writer and dear friend Alex Simmons. Also on the panel are authors Regine Sawyer and Milton Days.

It disappoints me that ECBACC gets so little or no press from the comics industry news sites. Please spread the word to your online friends. Maybe the news sites will spare a bit of space from their coverage of the major publishers, their alternative/indy idols, TV and movies, and industry scandals to cover one of the most positive communities there is. I’m looking at you...The Beat and Bleeding Cool and Comic Book Resources and The Comics Reporter and The Mary Sue...just to name the sites I visit daily.

Come to ECBACC. You’ll be very glad you did.

The official opening of the 2016 Vast Accumulation of Stuff garage sale season will be Friday and Saturday, June 3 and 4, hours to be determined between then and now. However...

I’m seriously considering opening the garage sale door for a couple  hours each day during the Memorial Day weekend. This isn’t definite because I’m not sure if I’ll be ready that soon, but it’s the goal I’m working towards.

The Memorial Day weekend garage sale would not be advertised in the local newspaper as I usually do. It might be advertised on Craig’s List. It will definitely be advertised in this bloggy thing of mine and on my Facebook pages and on Twitter. Consider it my thanks for the support I’ve been shown by online comics fandom for more years than I can count without straining my aged brain.

Keep following me in the bloggy, on Facebook and on Twitter. I’ll be posting all garage sales updates there.

That’s all for now. I’ll be back tomorrow with another installment of “Rawhide Kid Wednesday.” See you then.

Posted by Tony Isabella at 7:10 AM