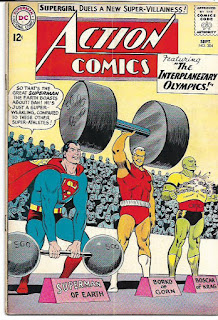 Today’s bloggy thing resumes my 136-part series on the comic books that hit newsstands in July 1963. That month was pivotal to my comics career because it’s the month when Fantastic Four Annual #1 ignited my desire to write comic books. I’ve told that story many times before, so I’ll not repeat it today.

“Resumes” isn’t wholly accurate. I launched this series two years ago, but it got put on the back burner. Rather than direct you to the installments that did appear, I’m going to “reprint” them with some reworking as needed.

My source for the comics released in July of 1963 is Mike’s Amazing World of Comics. My words can not describe the sheer wonder of that website, so I’ll simply suggest you visit it as soon as possible. Be warned. You’ll spend a great deal of time there when you visit, and every visit thereafter.

When I first conceived this series, Mike’s listed 138 comic books for the month. Updates to the website have reduced that number to 132, subtracting some issues and adding others. I’m going to follow the list as I printed it out a few days ago.

Action Comics #304 [September 1963] has a cover by Curt Swan with inks by Sheldon Moldoff. Superman and his “family” members received a lot of abuse on the covers of the 1960s. Editor Mort Weisinger knew he had to hook his readers with these covers. Dealing with the adult world, kids often feel like they are the universe’s punching bags. Weisinger played to those feelings of helplessness and even alienation, but he also uplifted their spirits as Superman overcame whatever humiliation or threat he faced.

The inside front cover ad pitches “the amazing MADE SIMPLE self-teaching Encyclopedia,” a 25-volume collection included Mathematics Made Simple, Chemistry Made Simple and so on.  There was no advance payment. The first volume cost $1 plus “a few cents mailing charge” and subsequent volumes would be $1.98 plus those few cents for the mailing charge. You could cancel your subscription to the series at any time. The books were published by Cadillac Publishing Company whose mailing address was in New York, New York.

“The Interplanetary Olympics” (11.67 pages) has Superman and Lana Lang transported to the planet Vorn so the Man of Steel can compete in an athletic competition. Since I want to avoid spoilers for any stories available in recent reprint collections, that’s all you get from me here.

The story is written by Leo Dorfman, but the Grand Comics Database says it’s a reworked version of "The Interplanetary Olympics" from Action Comics #220 [September 1956]. The earlier story was likely written by Edmond Hamilton and was drawn by Al Plastino. There was a wide-spread belief that the comics readership turned over every five to seven years, so such reworkings are common.

This newer version of the story was penciled by Curt Swan and inked by George Klein. It was reprinted in Showcase Presents Superman #4 [September 2008].

There’s a one-third page Tootsie Roll advertisement at the bottom of the story’s final page. It asks readers to “Try a Tongue Teaser” - A Green Glass Gas Globe - by repeating the phrase five times in eight seconds and then “Buy a Tongue Pleaser,” namely a delicious Tootsie Roll, said to be “America’s Favorite Candy.”

DC offered 2-year subscriptions to several of its titles in a full-page house ad. The low price was ten cents per issue. Ten titles were listed: Adventure Comics, Superman, Superboy, Jimmy Olsen, Lois Lane, World’s Finest, Action Comics, The Many Loves of Dobie Gillis, The Adventures of Bob Hope and The Adventures of Jerry Lewis. My brother Ernie had a subscription to Our Army at War and I remember being alarmed that the covers were folded in half before mailing. I don’t think that crease ever came out.

The other half of the page is an ad for Palisades Amusement Park in New Jersey and includes coupons for one free admission and two free rides. The coupons are said to be worth 65 cents and appear in all of DC’s September-October issues.

Circe is sweet and charming when she gets her way. However, when she can’t get what she wants, she is a veritable vixen. As Shakespeare put it: “Hell hath no fury like a woman scorned.”

I enjoy all your stories, particularly those in which you make use of the “LL” theme. Has it ever occurred to you that there are LL’s in the names HoLLywood, Niagara FaLLs and Death VaLLey?

ExceLLent observation; we’LL pass it on to our writers.

The other letters either point out seeming errors, which the editor explains...express favorite story subjects, which often allows the editor to plug upcoming stories...or ask questions, which likewise allows the editor to plug other stories. For example, Romney asks why Superman worries so much about crooks discovering his secret identity and why he couldn’t just assume another identity if they did learn he was Clark Kent? The editor replies:

You over-simplify the problem. However, so many readers have been asking this same question that we have prepared a special story, “Why Superman Needs a Secret Identity, which explains all. It will appear in the next issue.

The bottom third of the page offers memberships in the Supermen of America club for a dime.  It also has “Superman’s Secret Message” - in “Code Jupiter No. 4." The message reads:

Unfortunately, the editor’s answer to Romney’s questions make this secret message redundant. The translated message is:

"The next issue of Action will reveal why Superman needs a secret identity."

Next is “Shorty” by Henry Boltinoff. In this two-thirds of a page gag strip, the height-challenged hero is asked to keep a heavy-set friend from overeating. At midnight, the friend tries to sneak some food from the refrigerator. Where Shorty hung a picture of a pig. The remaining third of the page is an ad for Tootsie Roll Pops - “the only POP with the Tootsie Roll center!”

That’s followed by a full-page ad for Task Force - “America’s Most Exciting War Game" - and it only costs one dollar plus a quarter for postage and handling. Purchasers would get two giant battlefields, an 88-piece task force and 375 red markers “to record the massive bombings and shellings.”

Task Force sound like a great deal, but the task force ships, tanks and planes were likely made of thin cardboard or plastic. I base that on the one time my brothers and I ordered anything from the Helen of Toy Company. I wonder if that outfit is still around.

Supergirl stars in “The Maid of Menace” (11.67 pages). Written by Leo Dorfman and drawn by Jim Mooney, the story introduces the Black Flame, a super-powered villainess who claims to be the descendant of Supergirl from the 40th Century. This is a terrific story with plenty of action and human drama. Dorfman’s dialogue is heightened by Mooney’s knack for drawing expressions.  The Black Flame is one of the few truly great foes of the original Supergirl.  Alas, that Supergirl is decades gone and, until the current TV show starring  Melissa Benoist, not one of her replacements was as interesting or as lovable.

“The Maid of Menace” was reprinted in Showcase Presents Supergirl #2 [December 2008]. Both of the two Showcase Supergirl volumes are well worth getting.

The final page of the Supergirl story was an one-third of the page advertisement for Tootsie Roll Fudge, which I recall as being quite tasty. The theme of the ad is “Great Masterpieces” with the left side of the art showing a facsimile of “The Fifer” by Edouard Manet and the right showing two pieces of the one-cent fudge.

Advertisements fill the rest of the issue. There’s a half-page ad for “104 Kings Knights” - “A glorious set of plastic toys every child will be pleased to own!” - which includes both Black Knights and White Knights and comes in a “Treasure Chest Box.” The price is $1.49 per set.

On the same page is a half-page ad for “150 Civil War Soldiers” at the same $1.49 price. The set contains “two complete armies - the Blues and the Greys. Each piece of molded plastic. Each on its own base measuring up to 4 inches.”

There’s a full-page Wallace Brown Christmas Cards ad which extorts boys, girls, men and women to sell the cards and claims they could make at least $50 and more likely $100 to $200 in their spare time. I was a pretty trusting kid back then, but even I was suspicions of that claim.

Being the shortest and usually smartest kid in all my grade-school classes, I might have been tempted by the full-page American Body Building Club ad. It reads:

“BROTHER, CAN YOU SPARE A DIME FOR A NEW MILLION-DOLLAR HE-MAN BODY STRENGTH-POWERED WITH 520 MIGHTY MUSCLES! TO BECOME A STAR IN ANY SPORT! A SUCCESS IN EVERYTHING!”

The booklets were free. Mailing and handling was a dime. But I had other ways of dealing with the school bullies...and, no, statute of limitations or not, I won’t say more.

In future installments of this series, I won’t be writing anything about advertisements I’ve already written about. But I definitely want to give my younger readers a feel for the era.

Come back tomorrow for my look at Adventure Comics #312 featuring “The Super-Sacrifice of the Legionnaires!”

Posted by Tony Isabella at 1:18 AM