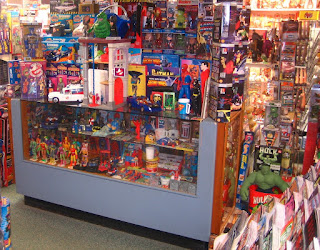 Free Comic Book Day is the national holiday of comicdom. It takes place on the first Saturday of May and is usually, but not always, tied to the release of a big movie based on comic-book characters. This year, that movie is Captain America: Civil War.

FCBD is the creation of retailer Joe Field, who figured the event would attract attention to comic books and comic-book stories. Jim Valentino, then the publisher of Image Comics, came up with tying the day into movie releases. The first FCBD was on May 4, 2002, and it’s been an annual event ever since.

As stated in Wikipedia, the three main purposes of Free Comic Book Day are: “to introduce everyone to the joys of reading comics, to call back former comic book readers and to thank current comic book buyers for their continued support.”

I’ll be spending Free Comic Book Day (Saturday, May 7) at Toys Time Forgot in Canal Fulton, Ohio. For more that two decades, this place has been selling vintage toys and comic books. I’ve heard so many good things about it. I’ve always wanted to visit it and, thanks to being invited to be its Free Comic Book Day guest, I’ll finally be able to see it. I wrote about this earlier this week, but my plans have changed a bit.

Sainted Wife Barb won’t be joining me. Instead, my security detail will be our neighbor Giselle, my daughter Kelly’s best friend since they were five years old or so.

The store’s address is 127 Cherry Street E. The FCBD events will be from 11 am to 5 pm, but the store itself is open until 8 pm. I’ll be signing from 11 am until 3:30 pm or so. I’m told the store will have both Black Lightning Volume One and Marvel Masterworks: The Champions on sale. A great time will be had by all.

For more info on The Toys Time Forgot and its Free Comic Book Day events, check out the store’s Facebook page.

That’s all for now. I’ll be back on Sunday with more stuff.
© 2016 Tony Isabella

Posted by Tony Isabella at 2:40 PM