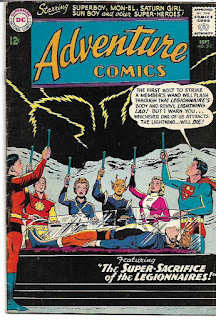 Today’s bloggy thing continues my “crazy is just another word for epic” 136-part series on the comic books that hit the newsstands in July 1963. That month was pivotal to my comic-book career because it was the month when Fantastic Four Annual #1 ignited my desire to write comics.

The cover of Adventure Comics #312 [September, 1963] is pencilled by Curt Swan with inks by George Klein and John Forte. The latter inked the heads of the Legionnaires.

Adventure Comics wasn’t a must-get-every-issue title for me until the Legion of Super-Heroes got their own feature. A lot happened in their first year. Mon-El joined the team from the Phantom Zone and was released from the Zone permanently a few issues later. We got the secret origin of Bouncing Boy. There were stories focusing on Sun Boy and Matter-Eater Lad. Lightning Lad died in action. The Legion of Substitute Heroes were introduced. Element Lad joined the team. Lightning Lass posed as her late brother and then joined the team as herself.

At one point, when my money was tight, buying all the Marvel comics was my priority. Only five DC Comics titles stayed on my must-buy list: Challengers of the Unknown, Doom Patrol, Green Lantern, Justice League of America...and Adventure Comics. All those young heroes of the future, combining human interest with science fiction and super-heroes, were irresistible.

“The Super-Sacrifice of the Legionnaires!” was by Edmond Hamilton with art by John Forte. Still mourning the loss of Lightning Lad, six heroes were determined to find a way to bring him back to life. The roster for the issue: Superboy, Mon-El. Saturn Girl, Sun Boy, Lightning Lass and Chameleon Boy. Also featured was Chameleon Boy’s shape-changing pet, Proty. The story was told in two chapters, one running 7.67 pages and the other 6.67 pages. That spare third of a page at the end of each chapter were filled with advertisements for Tootsie Roll and Tootsie Roll Pops.

Hamilton’s story was imaginative and emotional. As with many of the Legion stories of the era, bits of future business would be tossed into the mix for a panel. Then and now, I thought you could write entire stories around these background elements.

Forte’s figures were sometimes stiff, but he was a master of faces and expressions. He made the Legionnaires real.

The inside front cover advertises for the “Magic Art Reproducer.” This “amazing invention” allows the user to “draw any person in one minute” even if they nave taken no lessons or have no talent. The buyer’s $1.98 includes a free “How to Easily Draw Artists’ Models” guide. The device seems to be some sort of projection thing and is sold by Norton Products.

A half-page “Coming...Super-Attractions!” ad follows chapter one of the Legion story. It promotes the issues of Superman and Lois Lane which were used in the Action Comics #304 version, replacing that comic’s ad for Adventure Comics #312 with an ad for Action Comics.

The other half of the page offers 207 stamps for 25 cents.  Buyers would also get 88 flags of the world and all 14 Confederate States facsimiles in color. The hook is that a buyer will continue to get selections of unusual stamps and be billed for them.

Two more half-page ads follow the conclusion of the Legion story. “Missile Attack” ($1.50 including postage and handling) is a game that lets buyers make all out war in their own homes. The ad claims “you get enough nuclear battle equipment for maximum effort warfare and massive counter-attack! The game pieces are said to be “multi-color unbreakable plastic.”

The bottom half of the page offers 104 classic, racing, foreign and modern cars for $1.49. This one actually looks like it could have been fun.

“Smallville Mailsack” is next with five letters and the very cool “Bits of Legionnaire Business” section in which readers were asked to create new Legionnaires.  Letters first.

David Smith of Knoxville, Tennessee wants Lightning Lad back from the dead. Stephen Tenyak of St. Mary’s, Ohio thinks Superboy broke his vow against killing any living thing when he made water salty so Lana Lang wouldn’t sink in it. The editor says Superboy checked the pool for fish before he did this.

Violet Smith of Santa Ana, California questions a story that said Superboy and Lana were too young to get married. She points out that the World Almanac says that “in the state of New Hampshire, a girl can marry at 13 and a boy at 14 providing they have their parents’ consent.” She dares the editor to squirm out of this one and he replies:

Superboy’s parents are Martha and Jonathan Kent, right? And, if they gave their consent to his marriage to Lana, everyone would know Superboy was their son, a fact they have gone to great lengths to conceal. So your ingenious suggestions won’t work.

Maybe Superboy was saving himself for Lois Lane, his one true love. Or maybe, as per the New 52, he was awaiting for the chance to be a man-slut with Wonder Woman.

Paul Tremaine of Denver, Colorado asks if Krypto, Superboy’s dog, ever met Streaky, Supergirl’s pet. The editor answers that they’re both members of the Legion of Super-Pets who will be featured in an upcoming story.

Larry Minton of Parls, Texas wants to know why Lex Luthor is bald as a teenager. The editor says it was a meth lab fire. Okay, just kidding. The cause was chemical fumes released when one of Luthor’s experiment went awry.

Then and now, I love “Bits of Legionnaire Business.” In fact, some of these characters showed up in future Legion stories:

Bird Girl (can do anything any bird can do)
- Dennis Persica, New Orleans, Louisiana

The letters page is followed by the same full-page subscription ad that ran in Action Comics #304.

Superboy stars in “Lana Lang, Hollywood Star!” (10 pages). George Papp is the artist, but the writer has yet to be identified. Since the story has never been reprinted that I can see, I’ll make with the more complete summation.

Lana Lang’s father is filming a documentary “deep in the heart of the African veldt.” Lana is with him. When they are reported lost,  Superboy flies across the world to find them. The Langs aren’t so much lost as unable to return to civilization because a quake has caused a chasm. Superboy decides to help them secretly to protect their reputations as explores.

When Lana recklessly swings across the chasm on a vine, Superboy uses his super-breath to push her to safety when the vine breaks. He helps her start a fire and keeps a jaguar from eating her. But Lana is now over-confident because stupid moves are what we expect from Superboy/Superman supporting characters.

When the documentary is screened, Cosmic Studios thinks Lana looks like a female Tarzan and wants to star her in a jungle queen movie. Her parents don’t like the idea of her going to Hollywood alone - they’re going to India and are afraid the movie might be too lurid - but agree after the studio agrees to buy a new wing for the local hospital and add a clause that lets Lana choose her own leading man and make technical changes in the story.

What could possibly go wrong? I mean besides Lana going completely diva-bitch on the studio.

Lana rejects any leading man that might distract from her starring role. For the sake of the hospital, Superboy disguises himself and gets the part. When he reveals himself as the Boy of Steel, Lana is pissed. She plans to write him out of every scene.

Superboy has tricks of his own. He upstages Lana in several scenes. Lana has no control over what footage is used.

Months later, the film premieres at the Smallville Theater. Lana is still being a diva...until she sees the marquee:

Humiliated, Lana doesn’t even walk into the theater. Superboy goes after her and flies away with her. She’s angry, but he explains the billing was the producer’s idea. But he wants to show her that she got the star billing where it really counts.

There’s a plaque on the hospital’s new wing:

SMALLVILLE
HOSPITAL
This new wing built
through the generous
contribution of
LANA LANG.

Ashamed, Lana learns her lesson. She’s been a conceited little fool but she’s over it. She says:

I don’t want to be a Hollywood star anymore! I’d rather be an average person, a nobody like...like Clark Kent!

“Super-Turtle” appears in 0.6-page gag strip written and drawn by Henry Boltinoff. He rescues a paratrooper whose chute didn’t open, puts out a forest fire by creating a huge wind with his super-speed and is called on to perform a feat that requires great strength. He has to help a woman whose heel is caught in a sewer grating.

Why isn’t there a collection of Henry Boltinoff’s various DC Comics fillers? I loved those things as a kid and love them even more now that I can appreciate how talented Boltinoff was.

The rest of the page has the Tootsie Roll Fudge ad that appeared in Action Comics #304.  The following page has the 104 Kings’ Knights and 100 Toy Soldiers ads that also ran there.

The last interior page offers Blast Off, a space game that costs a mere $1.98 and comes with 196 unbreakable plastic pieces plus the “giant 312 sq. inch target of our entire solar system in brilliant color.” It’s from Five Star Toys of Commack, New York.

The inside back cover has the Wallace Brown advertisement telling folks they can make big money selling Christmas cards.

The back cover ad offers “204 Revolutionary War Soldiers” for only $1.98. You would get two complete armies - the British Redcoats and the American Bluecoats - with each piece made of that pure molded plastic so common to these comic-book ads.

This July 1963 series will continue with one or more installments each week. I’ll be back tomorrow with an update on The East Coast Black Age of Comics Convention. See you then.