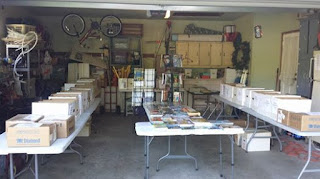 The good news is I am crazy busy writing stuff I think you’re gonna love. The bad news is I can’t tell you about it yet. I’m not trying to be a tease here, but I want you to know there are good reasons I can’t always be swift in answering your e-mails and other private messages. My goal is to respond to all outstanding business in both  my e-mailbox and Facebook message section by December 22, which is when I will turn 65.

Many things conspired to keep from holding any of my world-famous Vast Accumulation of Stuff garage sales in 2015. That won’t be the case this summer.

My first VAOS garage sale of 2016 will take place Friday, June 24, and Saturday, June 25. The hours will be 9-1 each day. There will be no evening or Sunday hours this first time around, but I might add these for subsequent sales. It’s a work in progress.

Besides garage sales and writing, I’ll be making approximately two  convention or other appearances each month between now and the end of the year. Here’s the current schedule...

Here’s some basic notes on the appearances:

If you’re a fan, I will sign anything I’ve written free of charge this year. I will sign other items on a case-by-case basis. If you have multiple items, I will sign them free of charge. However, if there are other fans in line, I might sign only a few of your items and ask you to step to the back of the line to get the rest. This almost never happens.

I will probably start charging something for my signature in 2017, though that’s not carved in stone. It will depend in part on what level of support I’m getting from the promoters of the conventions and other events.

If you’re a promoter who wants me as a guest at one of your shows, you should look at the above list for months when I’m not already doing two conventions. Then, you should be prepared to cover all of my hotel and travel expenses, as well as an appearance fee and a per diem for other expenses. I do realize putting on conventions is an expensive proposition for promoters, but I don’t wish to take a loss on my appearances at them. Trust me, I won’t be the least bit offender if you decide I’m too expensive for you.

I’ll be honest. There are conventions I will let skate on some of the above. All of my July appearances are as much or more vacations as they are professional appearances. There are other exceptions. But, going forward, this is generally how it will work. Promoters should know this before they contact me.

I’m in pretty decent shape for a man of my advanced years. I expect to be able to write and attend conventions for many more glorious years. But I intend to be smarter than I’ve usually been when it comes to both of those.

That’s all for now. I’ll have some sort of bloggy thing for you on the morrow. See you then.

Posted by Tony Isabella at 7:00 AM