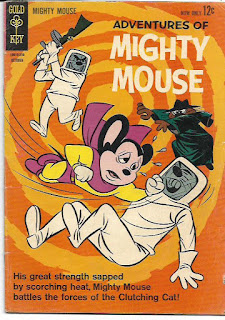 Today’s bloggy thing continues my “determined little cuss” 136-part series on the comics that hit the newsstands in the month of July 1963. That month was pivotal to my comic-book career because it was the month when the most spiffy Fantastic Four Annual #1 ignited my desire to write comics.

The Grand Comics Database came up terribly short when I initially checked its entry for Adventures of Mighty Mouse #160 [Gold Key; October 1963]. Back then, the entry had only the cover and cover date. The first incarnation of today’s bloggy thing added to that entry. Even sans credit for my work, I was thrilled to be able to assist the GCD, which is clearly the most mind-boggingly useful research tool for comics fans in the known universe.

We don’t know for certain who wrote and drew the stories in Mighty Mouse #160. A visit to Who’s Who of American Comic Books 1928-1999 notes that Fred Fredericks wrote, penciled and inked Mighty Mouse comics circa 1963-1965.  If the name sounds familiar and it should, it’s because the now-retired Fredericks had quite a career in both comic books and comic strips.  He drew Mandrake the Magician from June 1965 to his retirement in July 2013. In addition, according to Wikipedia, he drew these Gold Key comics: Nancy, Boris Karloff, The Twilight Zone, Mighty Mouse, Barney Google and Snuffy Smith, O.G. Whiz presents Tubby, Bullwinkle, Mister Ed and Munsters.  The hard-working Fredericks also inked a number of comic books for both DC and Marvel.

If Mighty Mouse looked like Mandrake, even an amateur art spotter like me could tell if Fredericks drew this issue. Since the heroes and their worlds couldn’t be more different I can’t.  However, what I can do is post a few pages of this issue in today’s bloggy thing. Maybe some one far more knowledgeable than I will be able to make a definite identification.

Since none of the stories in this issue seem to have been reprinted in the United States, I’ll be revealing plot details in discussing them. In other words, there are SPOILERS AHEAD!

The inside front cover of this issue is a black-and-white house ad that has a special offer for readers. For $1.25, “lovers of action and adventure” can get six issues each of Turok and Tarzan.  That’s both titles for $1.25.

“Panic from the Sun” (8 pages) is this issue’s cover story.  Mighty Mouse is called by the police to investigate a crime wave in which only awnings and sun umbrellas are being stolen.  These thefts are part of a plan by the Clutching Cat.

Mighty Mouse tracks the crimes from Mouseville to Catville, which is also part of his foe’s plan. A massive explosion sends our hero spinning into space and knocks the Earth off its axis just enough to turn the Mouseville into a tropical hellscape. With nothing to protect them from the heat, the mice flee their town and into the claws of the waiting villains.

Mighty Mouse shakes off the effects of the explosion and returns to Earth. But the scorching heat is weakening him. He flies back into space and channels all his remaining energy into punching the Earth hard enough to set its axis to rights. He captures most of the cats and puts them to work sewing awnings and sun umbrellas for all the people of Mouseville. The Clutching Cat manages to escape, but he’s suffering from a terrible case of heat rash. 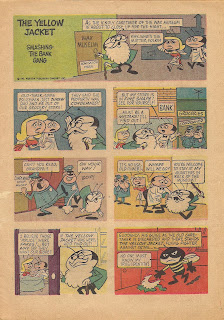 Next is The Yellow Jacket in “Smashing the Bank Gang” (4 pages). Most and maybe all Gold Key comics would have a feature unconnected to the star of the title in each issue. The Yellow Jacket poses as the elderly caretaker of a wax museum, but he’s actually a “flying fighter against crime.”

A grocer and his daughter are driven from their store by two cops who tell them the property has been condemned. The phoney cops are bank robbers using high-pressure torches to melt their way into a bank vault next door to the grocery. The hero makes short work of the gang, after all, he only had four pages to work with. The next day, the grocer’s daughter visits the museum to tell the caretaker what happened. She’s amazed to see he already has a display of the tools the robbers used. The girl didn’t realize he was a friend of Yellow Jacket. He says:

Digression. There was a time when many Gold Key comics had a rule about captions and word balloons touching panel borders. It was a dumb rule and it hurt the overall look of the art. 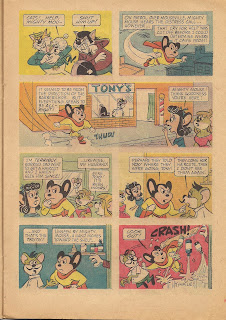 Mighty Mouse returns in “The Sinister Barbershop” (7 pages). Tony’s is the only barbershop in Mouseville. It even has a barbershop trio that sings to customers. Then, unexpectedly, the barbershop closes for several days. When it reopens - Tony nervously says that it was closed for repairs - customers start disappearing.

Evil cats - as if there were any other kind in Mighty Mouse - have kidnapped Tony’s wife and forcing him to help them seize the mice who come into his shop. Mighty Mouse investigates and the cats try to kill him. Deadly acid doesn’t work, but Tony passes it off as an accident. In the basement of the shop, some captured mice use old wires to send a morse-code message through the lit barber pole of the shop.

Mighty Mouse returns to the shop. The cats cuff him to a chair and spin it around at high speed to make him dizzy. That works for half a page and then the cats gets theirs. As a bonus punishment, Tony shaves their heads.

“Scrambled Eggs” is a one-page prose story and I was never one for reading comic-book prose stories. It involves friendly wolf twins, a hungry fox, newly-hatched birds and an angry bird mom. The moral of a story: Don’t mess with a mother, especially if she’s an eagle.

The prose story is followed by “Mirrors of Doom” (6 pages), another Mighty Mouse adventure.  A new Catville gang forms to use mirrors to capture mice. They trick a mouse hayride into going off the road by making the driver of the truck think the vehicle’s reflection in a mirror is an oncoming truck. As he flies over the woods, Mighty Mouse hears a cry for help.

The cat criminals use mirrors to confuse and blind Mighty Mouse, but he recovers quickly and goes after the gang. Our hero knocks down three cats with one punch, but the leader threatens to throw a bag of mice off a cliff if Mighty Mouse takes one step closer to him. Ironically, the cat is looking at a Mighty Mouse reflection in a mirror.

Mighty Mouse comes at him from another direction, saving the mice and capturing the gang leader.  Since the hayride truck was damaged in the crash, Mighty Mouse makes the cats tow the vehicle back to Mouseville.  Which is fifteen miles away.

“Cry Torpedo” (6 pages) is the issue’s final story. Captain Steve’s sightseeing boat is struck by a torpedo that lodges in the craft’s hull. It’s a giant hollow torpedo that works like a submarine and is manned by...all together now...evil cats looking to capture the mice. Mighty Mouse is on the job, but these criminals are clever.

Ramming Mighty Mouse doesn’t work, but the grease on the outside of the torpedo makes him hard for him to grab it until he uses ocean sponges to scrub it clean. He tears his way into the now-surfaced sub, but is tricked into holding a basket of nitroglycerin.  Drop it and all the mice die.

The cats make a break for it. Mighty Mouse throws the nitro basket at them.  However, since this isn’t Itchy and Scratchy, the blast only stuns the villains.

Mighty Mouse fixes the sightseeing boat. The passengers think that it was the greatest sightseeing trip ever. The captain wonders if he can get Mighty Mouse to do it on every cruise.

Final digression. I am writing today’s bloggy thing under protest. As the owner of a cat named Simba, who probably thinks she owns me, I’m appalled by the blatant species bigotry shown by the characters and the creators of this comic book. Cats are wonderful creatures. They don’t deserve to be physically and verbally abused by a brute of a mouse who wears red-and-yellow long johns. End of digression.

The inside back cover is a black-and-white “Keys of Knowledge” fact page on physical therapy. Number seven in a series, it shows how to do a “jackknife and scissors” exercise.

The back cover is an ad we’ve seen in other comics this month: 204 Revolutionary War soldiers for only $1.98.

I hope you’re enjoying my JULY 1963 series. Look for more entries in this series in the weeks and months to come.

Come back tomorrow for a very special installment of our “Rawhide Kid Wednesday” series. See you then.

Posted by Tony Isabella at 6:33 AM