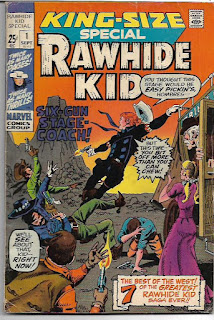 The Rawhide Kid is my favorite western comics character and one of my favorite comics characters period.  Something about the short of stature (but big on courage and fighting skills) Johnny Clay spoke to the short of stature (but big on comics-reading skills) teenage Tony Isabella.  After rereading the Kid’s earliest adventures when Marvel Comics reprinted them in a pair of Marvel Masterworks and an Essential Rawhide Kid volume, I wanted to reacquire every Rawhide Kid comic, reread them and write about them in this bloggy thing of mine. This is the 77th installment in that series.

The Rawhide Kid #1 [September 1971] is what the indicia reads, but the corner box has Rawhide Kid Special #1, as does the Grand Comics Database entry for the issue. It’s a 68-page, reprint special with a new cover by Herb Trimpe. In addition to the seven Rawhide Kid stories blurbed on the cover, there’s a non-series anthology tale. I’ve written about all of the stories in previous installments of this series, but I’ll save you the trouble of going back to those older bloggy things by repeating my earlier comments.

There will be SPOILERS AHEAD. You have been warned.

“Gun Duel in Trigger Gap!” is a 13-page, two-chapter story by Stan Lee, Jack Kirby and Dick Ayers. It was first published in Rawhide Kid #19 [December 1960]:

Because of his diminutive stature, the Kid was seen to be an easy target for the many bullies found in Marvel westerns.  A weary Kid feigns timidity to avoid a saloon shoot-out with the brutish Bill Corbett.  When Corbett tries to force his unwanted attentions on pretty Nancy Clark, the Kid gives the lout a two-fisted beatdown.  Within days, Nancy and the Kid have fallen in love.

Violent events rapidly put an end to the romance.  Nancy’s dad is the town sheriff and he recognizes the Kid...and the dreaded Garson Gang is coming to town to rob a gold shipment.  The sheriff takes a shot at the Kid. The Garson Gang takes Nancy prisoner.  The Kid rescues her, but then pretends he was after the same shipment. He flees, leaving Nancy behind in tears.

The sheriff pursues the Kid, but Rawhide gets the drop on him.  Our misunderstood hero then returns the gold to the lawman, asking him to tell his daughter Nancy that, though the sheriff recovered the gold, the Kid escaped.  Rawhide knows Nancy could never have a good life with an outlaw.  As the sheriff watches the lonely young man ride off, he realizes what kind of man Rawhide really is...and how much the Kid loved his daughter.  In future issues, we’ll see more bullies and more of the Kid pretending to be a badman to spare the feelings of others.

“Fight or Crawl, Kid!” (5 pages) is also from The Rawhide Kid #19 was also reprinted in The Mighty Marvel Western #38 [April 1975]. Lee, Kirby, and Ayers return. The Lee/Kirby/Ayers story starts with gunslinger Crow Mallon calling the Kid out in, yes, another saloon.  Mallon wants to make his rep by beating the Kid in a gunfight and tries to intimate Rawhide with some keen shooting.  In a scene that will be repeated in other tales, the Kid exhibits gun skills so far beyond Mallon’s that Crow virtually takes flight as he rides out of town. Sayeth the Kid:

Well, he wanted a rep, and I reckon he’ll get it after all...Crow Mallon, the loudest-mouthed four-flushin’ bully in these parts! Just like all blusterin’ bullies, their nerve turns to water when they pick on the wrong hombre!

The Mighty Marvel Checklist and Marvelmania ad runs between pages four and five of the above story. Oddly enough, they are the same checklist and ad that ran in Rawhide Kid #90, which hit the stands a month before this special.

This story is way too short for its plot.  The title character is an outlaw who tyrannizes his henchman Bull.  When they come across a small secluded town, Yak decides to take it over.  He gathers an army of thugs and does just that.  He appoints himself mayor, fines the bank whenever he feels like it, imprisons townspeople to make it easier to rob their homes, ranches, and businesses.

A stranger comes to town, applying for a job as a deputy because he plumb likes to fight outlaws.  When Yak draws on him, the stranger shoots the gun out of his hand.  Yak orders his gang to shoot the stranger, but they are interrupted by the arrival of the Cavalry. The stranger is Colonel Carter of the Fifth Cavalry.

How did the cavalry know about Yak’s takeover of the town?  Bull, tired of being pushed around, got a message to them.

In its five pages, “Yak Yancy” seems cramped.  More pages could’ve shown more of the townspeople reacting to the situation and more of Bull reaching his breaking point.  As I see it, the basic story is good enough that it could have been a long Rawhide Kid adventure. Here’s how my version would have gone:

The Rawhide Kid is living peacefully in the town.  When Yak Yancy takes over, he tries to lie low, but he can’t stand seeing good and decent people under the thumb of the outlaw.  The Kid fights back, but even he can’t beat a small army by himself.

Mayor Yancy tries the Kid for his “crimes” and sentences him to be hanged. That’s when Bull, inspired by the little guy’s courage, sends a rider to get the cavalry and organizes the townspeople to fight back and save the Kid.

The townspeople fight back, the cavalry arrives, and now it’s Yak and his men who are outnumbered.  They surrender.  Colonel Carter tells Bull there’s an opening in his troop for a good man like him. Pretending not to know who Rawhide is, he asks the Kid to go on a quick ride to see if any of Yancy’s men got away.  He tells the Kid that if any of the outlaws reach the border - just a few miles to the north, by the way - they would be out of his jurisdiction and he’d be unable to take them in.

“The Little Man Laughs Last” (6 pages) has long been one of my all-time favorite Rawhide Kid stories. It’s by Lee, Kirby and Ayers and also comes from Rawhide Kid #29. It was reprinted again two years later in The Mighty Marvel Western #34 [September 1974].

The tale starts with the Kid leaping from his horse to a stagecoach because he doesn’t want to ride “a hoss all the way to Abiline!” I assume Stan meant “Abilene,” either the city in Kansas or the one in Texas.  This isn’t the first time we’ve seen our young hero take a stage coach.  I assume his horse just follows along in case he’s needed in the last panel, as he is in this story.

Two imposing passengers - you can see them on the cover - get tough with the Rawhide Kid, falsely accusing him of pestering the lovely young woman riding with them.  Before the confined brawl can really get going, the stage is held up by outlaws.  The passengers cower before the bad guys, but the Kid takes on the gang all by himself. He also slaps around the bullies a mite.  Removing his hat, Rawhide bows before the lady and says:

Sorry for the rough house, ma’am! Sometimes it takes us small fellas a little while to tame those big tough hombres! Anyway, I reckon you won’t have to worry about them no more!

The lovely lady plants a kiss on the cheek of the surprised Rawhide Kid and says:

The startled Kid rides off as the woman reflects:

I fear I’ve scared him off! It took the harmless kiss of a helpless female to do what killers’ guns and fists could not accomplish!  Farewell, Rawhide Kid!! No matter your size, you’re the biggest man I’ve ever met!

Posted by Tony Isabella at 7:50 AM