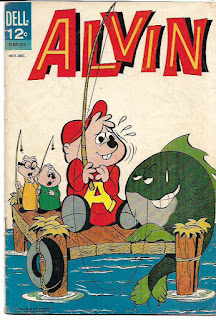 Today’s bloggy continues my 136-part “chipmunk-charged” series on the comic books that hit the newsstands in the month of July 1963. That month was pivotal to my comic-book career because it was the month when the amazingly awesome Fantastic Four Annual #1 ignited my desire to write comics.

Alvin and his fellow chipmunks were created by Ross Bagdasarian, Sr. for a 1958 novelty record. As Dave Seville, Bagdasarian had a hit with “Witch Doctor.” The voice of the title character singing "Oo-ee, oo-ah-ah, ting-tang, walla-walla, bing-bang" was a pitched-up version of Bagdasarian’s voice. This was pre-Chipmunk.

In the fall of 1958, the “witch doctor” voice became the voice of Alvin and the Chipmunks in "The Chipmunk Song (Christmas Don't Be Late)". The song was a hit. It sold more than four million records in just seven weeks, topping the Billboard Hot 100 for four weeks. It won three Grammy awards and was even nominated for record of the year. A subsequent album was also successful.

Alvin, Simon and Theodore made their first comic-book appearances in Four Color #1042 [Dell; October-December 1959]. The chipmunks in that one-shot don’t look as they do in the subsequent Alvin title that ran for 28 issues from October-December 1962 to October 1973. They had been redesigned for The Alvin Show, the first of several Chipmunks cartoon shows developed for television. The first series of 26 episodes aired in 1961-1962.

Which brings us to today’s spotlight comic book from the month of  my comics awakening. Alvin #5 is dated October-December 1963. The Grand Comics Database has yet not identified the artists or writers of this issue. We know that the prolific Paul S. Newman wrote for the title, as did Don Segall, but we don’t know if either of them wrote the stories in this issue. As for the artists...I’ll include a few pages from this issue in the hope that one of my readers will be able to identify who drew them. As always, I appreciate any information about this comic book and the others I’ll be writing about as part of this series. 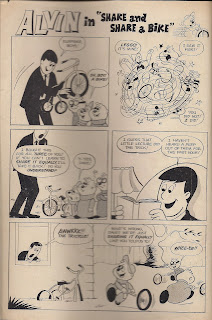 “Share and Share a Bike” is a one-page gag strip that runs on the inside front cover of the issue. Dave gives the boys a new tricycle and is upset when they fight over it.  He tells them they have to share it equally. They do, but not in any way Dave expected. I’ll run this page as an addendum so that you can enjoy the punch line - punch panel - for yourselves.

There are four Alvin stories in this issue. In each of them, either Alvin or Dave want something or want to do something...and things go hilarious awry.

In “Water on the Brain” (5 pages), a very tired Dave decides he has to deal immediately with a dripping faucet and the chipmunks manage to mess up the simple task he gives them. 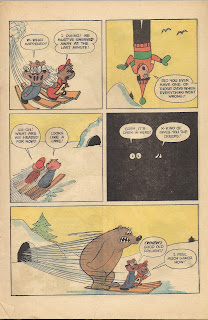 In “Snow Fun” (9 pages), Dave and the boys rent a cabin so Dave can compete in a skiing competition. Alvin and Simon want to get in on that fun. Alvin’s natural inclination for making things go not as planned, combined with an angry bear, makes for a race that doesn’t go as planned.

Dave buys “a genuine 1926 Sputtz Bare-Back” car in “Auto Mission” (5 pages). A simple plan to take the boys for a spin results in two death-defying accidents and a carload full of gravel. How? Because that’s the way Alvin and Dave roll. It’s my favorite story in this issue. 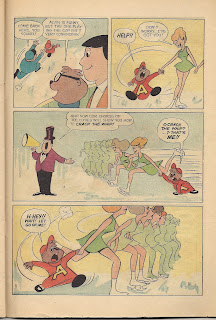 In “Rink Jinx” (8 pages), Alvin can’t go to ice show with Dave and the boys because he lost his ticket. But, since he doesn’t want to tell Dave that, he feigns “larynxgitis” and stays home. However, he then sneaks out the house and tries to sneak into the arena where the event it taking place. What could possibly go wrong with such a well-conceived plan.

Also in the issue is “Fido’s Flights of Fancy” - a one-page prose story I didn’t read because I didn’t read those as a kid and don’t read them now - and a four-page Little Angela story: “No Space for Rant.” As I understand it, comic books of the era had to have some content that didn’t feature the title character in order to qualify for second-class mailing privileges. 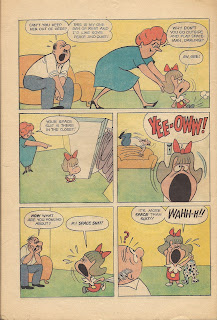 Little Angela is a thoroughly bratty kid who makes long demands on her parents. She insists they - right now - replace her moth-eaten space suit. She’s such an unpleasant child that I didn’t mind too much when the tale concluded with her standing on her lawn in a new space suit that was so tight she couldn’t move her arms and legs. This is bad parenting, but...

I don’t believe the artist of this Little Angela story is the same artist who drew the Alvin stories. I’ll post a page of it so that you can make your own determination on that.

The inside back cover is a full-page ad selling 132 Roman soldiers for only $1.98. The back cover is the Wallace Brown ad which claims boys, girls, men and woman can make $50 and more selling Christmas cards in their spare time. I’ve written about these ads in earlier July 1963 bloggy things.

That’s all for today. There will be more JULY 1963 bloggy things in the weeks to come, a Rawhide Kid Wednesday tomorrow and, starting on Thursday, my multi-part report on the always-wondrous East Coast Black Age of Comics Convention in Philadelphia. Thanks for stopping by today and I’ll see you tomorrow.

Posted by Tony Isabella at 7:15 AM