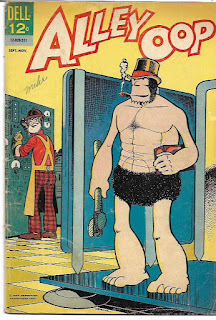 Today’s bloggy thing continues my 136-part “reaching back through time” series on the comics that hit the newsstands in the month of July 1963. That month was pivotal to my comic-book career because it was the month when Fantastic Four Annual #1 ignited my desire to write comics.

Alley Oop was the creation of cartoonist V.T. Hamlin. The caveman made his debut on December 5, 1932, in a comic strip syndicated by Newspaper Enterprise Association. The strip mixes adventure, humor and outright fantasy.  From Wikipedia:

Alley Oop, the strip's title character, was a sturdy citizen in the prehistoric kingdom of Moo. He rode his pet dinosaur, Dinny, carried a stone war hammer and wore nothing but a fur loincloth. He would rather fight dinosaurs in the jungle than deal with his fellow countrymen in Moo's capital (and only) cave-town. In spite of these exotic settings, the stories were often satires of American suburban life.

Several years into Alley Oop’s run, the late Hamlin introduced time travel into the strip via 20th-century scientist Dr. Elbert Wonmug. With this development, Alley’s adventures could traverse all time and quite a bit of space, earthly and otherwise. Though the caveman isn’t nearly the household name of his earlier decades, his comic strip continues to this day.

Alley Oop #2 [September-November, 1963] is the second of two issues published by Dell Comics after the company’s split with Gold Key. Though the cover shows Alley, Wormug and the time machine, all of the interior comics are prehistoric domestic comedies with just one mention of Wonmug. The Grand Comics Database doesn’t identify the cover artist, but my best guess would be Dave Graue, who wrote and draw the Alley Oop newspaper strip from 1966 to 1991, and assisted Hamlin prior to that. 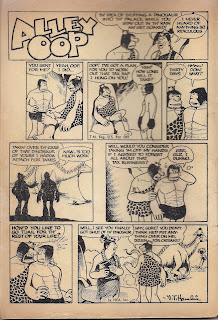 The inside front cover of this issue is a reprint of an Alley Oop Sunday strip signed by Hamlin. I don’t know the date of the strip, but I’ll post it as an addendum to today’s blog.

The issue features four original Alley Oop stories. The GCD doesn’t have any credits for them, but it’s possible they were written by the prolific Jack Mendelson, who wrote hundreds and maybe thousands of cartoons and comic books during his career. As for the artist or artists, I’ll post a few pages and you can play comic art detective with them.

WARNING! THERE BE SPOILERS AHEAD! 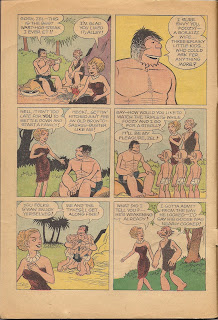 In “Domestic Bliss” (7 pages), the ever-rhyming Foozy and his wife Zel decide Alley needs to settle down and raise a family. If Alley spends a few hours with their happy family, Zel opines, Oop would propose to girlfriend Ooola on the spot. The couple invites Alley for a delicious wart-hog steak meal and then ask him to watch their triples while they go for a stroll. Alarmingly, the triplets look exactly like Foozy. Brrr...

Every game the triplets play with Alley results in intense bodily injury to the caveman.  When Foozy and Zel meet up with Ooola, Zel predicts Alley will propose as soon as he sees his girlfriend.  Oop walks towards them with a dazed expression and takes Ooola’s hand, telling her there’s something he wants to ask her:

I wanna ask that you never ever bring up the subject of marriage and kids again!!

Ooola has gotten over her disappointment in “Neither Fish Now Fowl” (9 pages). She offers Alley scrambled dinosaur eggs for breakfast, but he craves “a real he-man breakfast - like broiled barracuda!" This requires him to chop a large chunk of tree into a canoe and go fishing. Things go wrong.

The battle of wills continues. Alley catches another fish and, when the bird takes it, he tries to reel the bird in. Instead, the bird wraps the fishing line around the canoe and dumps Alley and Ooola into the water.

Ooola begs Alley to give up “this wild idea of fish” for breakfast. The stubborn caveman goes to the local fish market, only to learn the shop is out of fish. The owner offers him a baby archaeopteryx and gets clobbered for his offer:

Must be one of them bird-lovers!

In “Tee for Two” (4 pages), King Guz wants to learn to play golf like all the other kings. Thrown out of his living room by his wife Oompa, he enlists Alley Oop to be his caddy. Though this doesn’t go well, it’s Guz and not Alley who takes his lumps.

Frustrated, Guz gives up and kicks his golf ball into an impossible hole-in-one. Much to Alley’s dismay, the king insists on continuing his practice into the wee hours of the morning.

“The Worm Turns” (12 pages) is the final and longest story in this issue and it’s problematic...to put it mildly. King Guz wants Alley to go on a mission to Amazonia, an island that is ruled by “dames.” As a disguise, Alley wears a blonde wig and a dress that would show a lot of sideboob on an actual woman.

Just walking out of Guz’s cave, Alley gets fondled by an lecherous fellow caveman. Since cosplay does not equal consent, Alley knocks the creep’s false teeth out with a KA-POW punch.

Dinny the Dinosaur laughs as Alley’s appearance and earns himself a CLONG on the snout. Oop rides Dinny to Amazonia, which, all of a sudden, isn’t an island.  A rock that makes Amazonia territory has this message chiseled into it:

Two Amazons, both bigger than Alley, see through his disguise and take him back to their camp as an example to “the other (ugh) men.” He finds the men cleaning, doing laundry and sweeping outside the Amazon Palace. Oop is appalled:

Why’nt you guys stand up on your hind legs and demand yer rights?

Dear me, we’ve tried that!

But those awful brutes just knock us down again...BAW!

Alley thinks to himself:

I never seen such a bunch of henpecked jellyfish in all my born days! I kin see I gotta make some changes around here!

He offers them a container of water:

Well, fellas–-looks like I got here with this magic potion just in time! One swig of this stuff and no dame on Earth’ll dare talk back to ya! 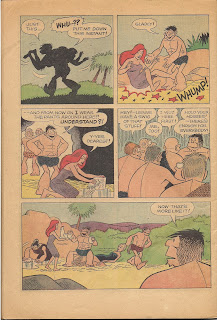 One of the men drink the “potion” and grabs a gorgeous red-haired Amazon. He dumps her on the floor and tells her to start cleaning:

From now on, I wear the pants around here!! Understand?!

Alley is pleased with his accomplishment here. The husbands of the Amazons prefer things this way. The redhead takes Alley aside:

Mr. Oop–-should I let you in on a little secret? We women prefer it this way, too!

She kisses him on the cheek.

Oop returns to his home country of Moo. Ooola remarks that Alley’s looking pleased with himself. What follows might be the sole saving grace of this story. Alley says:

I just taught those poor simps in Amazonia to stand up to their wives! Kin ya imagine a guy lettin’ himself be pushed around by a mere female?

To which, Ooola loudly responds...

...before landing a solid CLONG on Oop’s chin.

Dell comics of this era didn’t carry much advertising.  The inside back cover offers 147 Famous Automobiles for only $1.98 while the back cover is the Wallace Brown come-on trying to entice readers to sell the company’s Christmas cards.

I’ll have some other stuff later in the week, but, for tomorrow, I have another installment of this JULY 1963 series. See you then, my friends.