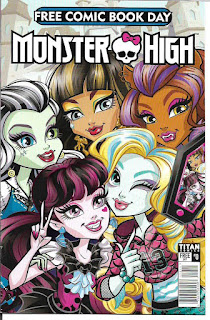 QUALITY: I enjoyed this. It’s well-written, expressively-drawn and sets up an ongoing series.

ACCESSIBILITY: The issue has a “Who’s Who” page that introduces the main characters and the story itself is easy to follow. It’s a fun comic book that’s suitable for all ages.

SALESMANSHIP: If readers like this story, they will probably enjoy the ongoing comic-book series promoted in the issue. It also ran  ads for a Monster High official magazine and Monster High apparel. However, two other such pages were wasted. They promoted the brand but sans any explanation of the brand and without pitching specific products.

SCORE: 8.5 points out of a possible ten. 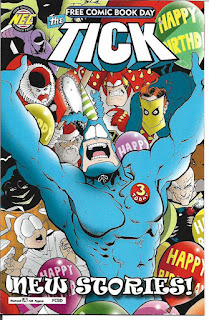 The Tick [New England Comics Press] stars the character created by Ben Edlund as a newsletter mascot for a chain of comic-book shops. Talk about humble beginnings for a super-hero who has since gone on to headline comic books, an animated cartoon series and two live-action series, the latest now airing on Amazon Video. I have liked some versions of this often oblivious hero better than others, but there’s no denying he and his sidekick Arthur speak to me and many other readers/viewers.

This FCBD issue presents two new stories of the Tick. One in which he throws himself a birthday party, the other in which he attends a political debate. Both are written by Jeff McClelland and drawn by Duane Redhead.

QUALITY: The birthday party is the better of the two. Amusing and even heartwarming. The political debate story had its moments, but basically fell flat on its face. However, to be fair, I’m sick of the “all politicians are terrible” position. It’s not the least bit profound. Indeed, it’s a willful ignoring of reality.

ACCESSIBILITY: There’s no real background given in these stories or elsewhere in the issue, but I’m not sure the Tick needs a whole lot of background. He’s a big goofy guy who doesn’t see things as more stable people do. You can get that much from the stories.

SALESMANSHIP: There is one ad offering previous Free Comic Book Day issues of the Tick and a second selling collected editions of his comic-book collections. There are no ads for DVDs of his animated series or his original live-action series. Indeed, neither is even mentioned in this issue.

SCORE: Six out of ten points. 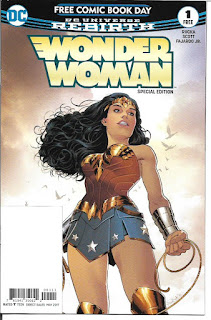 Wonder Woman #1 [DC] reprints “Year One Part One” by Greg Rucka and Nicola Scott from issue #2 of the current Wonder Woman series. In this story, we get the backgrounds of Steve Trevor and Diana before their fateful meeting.

ACCESSIBILITY: It’s an origin story so what you need to know is, by its very nature, built right into the story. Also, the basic Wonder Woman origin has been around since the 1940s and, though more than a few details have changed over those decades, the core origin is still in place.

SALESMANSHIP: Many of the ads are geared to Wonder Woman fans. The inside front cover has the movie poster. Wonder Woman is shown in an ad for the various Six Flags amusement parks. Another ad is for a Wonder Woman prose novel by Leigh Bardugo. There are four pages of ads for expensive Wonder Woman statues. Wonder Woman is part of an ad for DC Universe: The Exhibit, which is part of the Warner Bros studio tour in Hollywood. There are ads for collections of the two stories mentioned above. There’s a full-page “ad” for the free DC Essential Graphic Novels 2017 catalog, available at your local comics store. Wonder Woman is on the cover of the catalog. 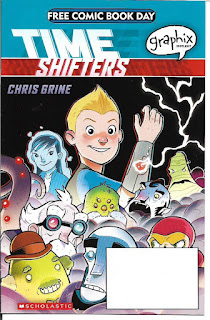 Time Shifters [Graphix Spotlight/Scholastic] has a 28-page excerpt from a graphic novel by Chris Grine. A kid named Luke gets a weird device on his arm, a device dropped by a trio of monster villains. He is “rescued” from them by a scientist, a robot, a dinosaur and some sort of blob creature that has the form of a human girl.

QUALITY: Clearly aimed at younger readers, Time Shifters does have some funny moments. But it lacks any real sense of peril. I wasn’t bowled over by the script or art, but it was a very readable comic book. Its intended audience should enjoy it.

ACCESSIBILITY: Very little gets explained in this excerpt. That was  not a major problem as this is the start of a longer graphic novel.

SALESMANSHIP: The inside covers have ads for other graphic novels from Scholastic. The back cover has an ad for the full edition of Time Shifters. 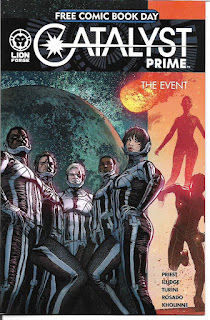 Catalyst Prime: The Event [Lion Forge] is a 26-page story that sets up a new super-hero universe. A large object is on course to turn the Earth into space dust. A corporation has been working to save our planet and sends several brave souls into space to accomplish that mission.

QUALITY: Written by Priest and senior editor Joseph Illidge, this has a lot of the familiar Priest quirks I’ve come to find tiresome. Since others like his writing more than I, I deduct no points for my personal preference. The art by Marco Turini and Will Rosado is excellent. The surprise ending is quite chilling, but does remind me of Valiant’s Harbinger series to some extent.

ACCESSIBILITY: Good. I didn’t have any trouble following the story despite the time jumps, but I would found more information on the characters and the corporation helpful.

SALESMANSHIP: So-so. The inside front cover is just a big credits page. In a giveaway comics, that space should be better utilized to sell the company’s comics. The inside back cover has an ad for the first of the Catalyst Prime titles. 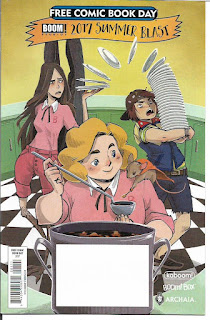 Boom! Studios 2017 Summer Blast has excerpts from three titles, two of them new. David Petersen’s Mouse Guard is the lead feature. It’s followed by Brave Chef Brianna about an enthusiastic human opening a human food restaurant in the aptly-named Monster City. The third and final story is about the band Coady and the Creepies, which is “proudly presented by Lumberjanes.”

QUALITY: The Mouse Guard story is excellent. The Brianna story is fun and makes me want to see more. The Coady and the Creepies story is so-so at best.

SALESMANSHIP: Pretty good. The Brianna story is followed by a one-page recipe for “Brazilian Cheese Waffle Breakfast Sandwiches” with the note that every issue of Brave Chef Brianna will contain a new recipe. There are four pages of ads for Boom! titles, but the ads don’t tell you anything about the titles. The back cover is - thank Godzilla - the last time I have to see an ad for Disney’s current Pirates of the Caribbean movie in one of these Free Comic Book Day free comic books.

SCORE: Six out of seven points.

Mission accomplished! For the first time ever, I read and reviewed all of the Free Comic Book Day comics. Yea for me.

Of course, Halloween ComicFest will be here before you know it and I’ll have another batch of free comic books to read and review. I suppose there are worse fates.