MONDAY MORNING THIS AND THAT 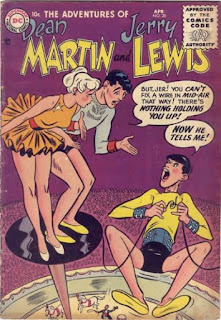 My “stuff waiting to be reviewed” box is getting full, so let’s see if I can make it a little easy for Old Man Tony to lift. We begin with some information I recently learned from Edward Bebee on the DC History mailing list.

Regular readers of my columns know I'd love to see DC Comics do collections of their Adventures of Bob Hope and Adventures of Jerry Lewis comics of the 1950s and 1960s. The usual response is that DC doesn’t own the rights to those comics. My usual response to that is, given the considerable charitable efforts of those gentlemen in their lifetimes, a charitable component to such collections might be of interest to their estates. There are a lot of great artists and writers who worked on those titles.

As it turns out, the copyrights on some of those comic books have never been renewed and may be in the public domain. Which means DC or another publisher could reprint them. However, there are likely trademarks on the names of Bob Hope, Jerry Lewis and Dean Martin. Any interested parties should talk to an attorney first and then,  just because it’s the right thing to do, the estates of Hope, Lewis and Martin.

Looking at some other DC licensed comics of the era...

Cooga Mooga Products, Inc. filed renewals on Pat Boone #1-3 and #5. The fourth issue might well be in the public domain.

DC filed renewals on the entire twelve-issue run of Jackie Gleason and the Honeymooners. They did the same for the nine-issue run of The Adventures of Alan Ladd.
Bebee could find no renewals for The Many Loves of Dobie Gillis #1-26. DC history buffs know several of those issue were “modernized” redrawn with all references to the classic TV series removed. The altered stories were published in Showcase #81 [March 1969] and the four-issue Windy and Willy.

Not to get too political here, but, for all the right-wing moaning about “Hollywood values,” those values have always included great charitable efforts by its performers and studios. Hope donated his talent and more to the USO. Through his Labor Day telethons, Lewis was the public face of the Muscular Dystrophy Association.

Comics creators and their publishers have proven themselves just as generous on numerous occasions. I think those charitable activities could be the hook to reprinting some great licensed comic books of the past. I’d buy them. 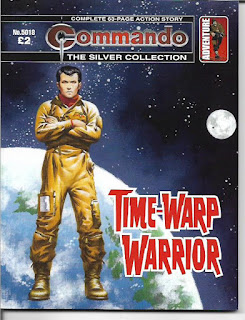 Would you like to see regular reviews of the British comics digest Commando? I subscribe to the weekly 68-page war comics series from England and have been enjoying it a great deal. Each issue contains a 63-page anthology story set in various wars. Each month’s worth of issues has two new stories and two reprints.

Commando #5018 takes the concept further with “Time-Wrap Warrior” by Mike Knowles with art by C.T. Rigby. Originally published as #1294 [February 1979] and reprinted in issue #2604 [February 1992], this is an honest-to-gosh science-fiction story in which a man from the future travels back in time to foil the plans of four villains from his era who want to change history. The action ranges from the Roman invasion of Britain to England’s Middle Ages to World Wars I and II. It’s a solid comics adventure.

Each reprint issue of the title contains this note: Some language in early Commando reprint stories may not seem as acceptable as it was when first published. The material has been included to place the story in the context of time. It is in no way intended to cause offence by doing so. 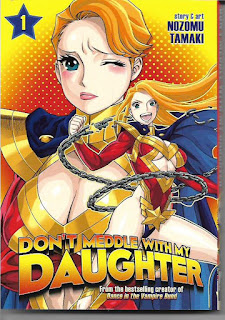 Nozomu Tamaki’s Don’t Meddle with My Daughter Vol. 1 [Seven Seas; $12.99] is a manga series about a teen super-hero and her mom, who used to be a super-hero and still has her powers. This is the kind of series that is just plain wrong on so many levels and which is still fun.

The mother-daughter relationship is both heartwarming and humorous. The current Eighth Wonder doesn’t realize her mom was the previous Eighth Wonder, though it should be obvious, and is somewhat jealous of her predecessor. The mom thought the super-hero stuff was in her past, but will do anything to protect her daughter. Throw in some mystery as to the daughter’s dad and, in between the risque humor, you have an intriguing super-hero soap opera. I’m going to continue reading this series for at least another volume or two. 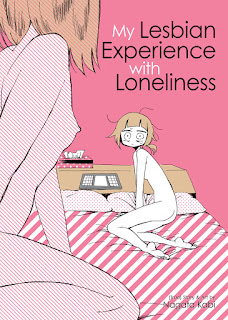 Nagata Kabi’s My Lesbian Experience with Loneliness [Seven Seas; $13.99] is the artist’s breathtakingly honest tale of her battles with depression and sexuality. At 28 years old, Kabi is adrift in her own life. She goes from job to job. She is looked down upon by her family. She doesn’t know where she’s going and this frequently plunges her into crippling depression. She doesn’t present herself well in dress or demeanor. Adding to that, she has never had sex, something she feels she must experience.

Creating manga turns out to be Kabi’s salvation, at least in that she has finally found her passion. The desire to face her sexuality and finally have sex drives her to an escort agency. This graphic autobiography recounts her experiences.

Kabi’s courage in telling her story with all its embarrassments and other fears is nothing short of stunning. Inappropriate as it would be, I found myself wanting to hug her and maybe lessen her obvious pain in some small way.

My Lesbian Experience with Loneliness is a powerful graphic novel. When I finished reading, I wanted a sequel in which Kabi achieves the happiness and normalcy she craves. I want things to be good for her. Any graphic novel that can make me feel this strongly for its  protagonist is one I have to recommend to adults and older teens. I hope next year’s Eisner Awards judges consider nominating it in the categories in which it would be eligible. 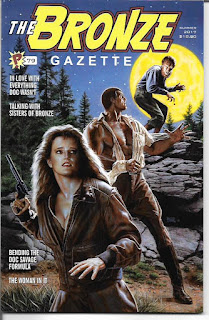 The Bronze Gazette #79 [Summer 2017; $10] is another must-read for Doc Savage fans. The cover is an amazing Bob Larkin painting that was commissioned by publisher Terry Allen. It shows Pat Savage, Doc Savage and a classic Hollywood style werewolf. Inside, there are articles on two unforgettable women who appeared in Doc Savage novels, the scoop on Will Murray’s next Doc Savage novel, a piece on Bantam Doc Savage novels that never appeared, conversations with the fan Sisters of Bronze, a look at a female adventurer inspired by Doc Savage and more.

The Bronze Gazette packs a lot into its fifty pages. Its production values are superb. It’s one of my favorite magazines and, without hesitation, I recommend it to all of you. 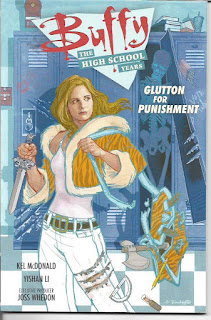 In addition to Dark Horse’s ongoing Buffy the Vampire Slayer title, the company is publishing done-in-one graphic novels set during our heroine’s years in Sunnydale. In Buffy: The High School Years - Glutton for Punishment [$10.99], needing extra credit, the Buffster and Xander sign up for a home economics class whose teacher is a very hungry and particular about what he eats tiger demon. This guy makes Gordon Ramsey look positively cuddly.

Written by Kel McDonald, the 72-page story hits the correct beats from start to finish. The characters sound like their live-action counterparts. The story has that Sunnydale High School logic to it where citizens don’t let the occasional monster send them fleeing for safer real estate. The villain is engaging from the beginning to the satisfying ending. Without giving us exact likeness of the actors who starred in Buffy the Vampire Slayer, artist Yishan Li gives us characters instantly recognizable as the characters from the TV series.

At a compact 6 by 9 inches, Glutton for Punishment would be a tasty little Halloween gift or stocking stuffer for the Buffy devotee in your life. Recommended. 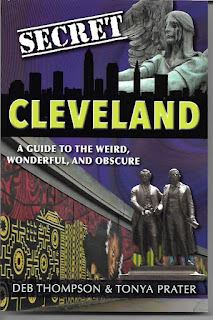 One more for the road, especially if the road is located in my home town of Cleveland, Ohio. Written by Deb Thompson and Tonya Prater, Secret Cleveland: A Guide to the Weird, Wonderful and Obscure [Reedy Press; $20.95] offers ninety examples of intriguing, little-known places to see in Cleveland.

With photos accompanying each chapter, readers will learn about the Christmas Story house from the movie of the same name; the ghostly subway under the Detroit-Superior Bridge; the perhaps haunted House of Wills; a possible door to a parallel universe; a bar which has bullet holes from an alleged assassination of Eliot Ness; several hidden waterfalls and much more. You could plan years of worth of fun outings from this book.

The book would make a terrific gift for anyone living in Cleveland, but I suggest another twist on the present. Choosing from the book, offer to escort whoever you give it to on an adventure or three of their own choosing.

That’s all for today. I’ll have more reviews for you tomorrow. See you then.