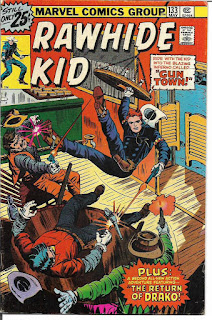 RESOLVED: The Rawhide Kid is my favorite western comics character and one of my favorite comics characters period.  This is why I’ve written over a hundred columns about him. Something about his short stature, but large courage, honor and fighting skills speaks to me.  After rereading the Kid’s earliest adventures when Marvel reprinted them in a pair of Marvel Masterworks and an Essential Rawhide Kid volume, I decide to reacquire every Rawhide Kid comic, reread them and write about them. We’ve reached the title’s extended twilight.  We’ve seen the last new Rawhide Kid story that will appear in the now-bimonthly reprint series. This is the 120th installment of my “Rawhide Kid Wednesday” columns.

The Rawhide Kid #133 [May 1976] has the Larry Lieber/Bill Everett cover from The Rawhide Kid #62 [February 1968]. Outside of the 1976 Marvel trade dress, the only changes are a red background replacing the white background, stronger color on the gun bursts  and a cover blurb being moved and resized to fit the new design. 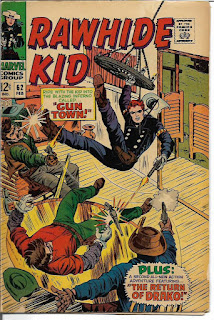 Inside the issue, we get reprints of the two stories from Rawhide Kid #62: “Gun Town!” (9 pages) by writer Denny O’Neil, pencil artist Paul Reinman and inker Vince Colletta, and “The Return of Drako” (8 pages) by O’Neil (plot), Gary Friedrich (script), Reinman (pencils) and Colletta (inks). I wrote about this issue four years ago and you can read what I wrote about these stories here. 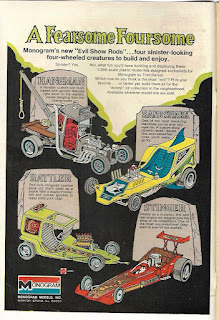 The inside cover has a full-page ad for Monogram’s Evil Show Rods: Hangman, Sand Shark, Rattler and Stinger. Other paid ads include: Slim Jim. LaSelle Extension University, Kung Fu and Karate lessons, selling the Grit newspaper, auto repair books, skateboards, Olympic Sales Club and American Seed Company. There are 16 “classified ads” for mail-order comics dealers, which is up three from the previous issue of Rawhide Kid. 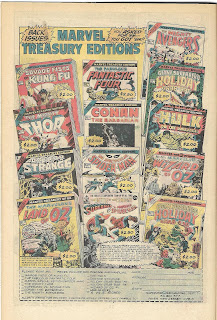 The first Marvel house ad is a full-pager hawking Marvel Treasury Editions. Most are either $2 or $2.50 plus fifty cents postage and handling. However, for five bucks, you can get one of 2000 copies of Superman Vs. Amazing Spider-Man signed by Stan Lee and Carmine Infantino. However, there are reports that Infantino was gone from DC Comics before signing all 2000 copies...and also that Stan later signed another 5000 copies of a second printing. Obviously, I would love to hear more about this.

The half-page “Mighty Marvel Checklist” plugged what I’m guessing were titles that came out in the same week as the issue of Rawhide Kid. They were: Avengers #147, Incredible Hulk #199, Jungle Action #21, Defenders #35, Omega the Unknown #2 and Conan #62. 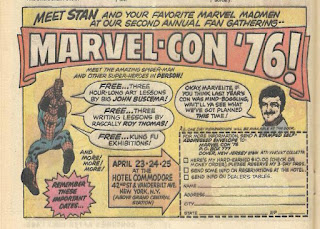 The rest of the page was a house ad for Marvel-Con ‘76, offering a trio of free hour-long art lessons by John Buscema, a trio of free writing lessons by Roy Thomas and free Kung Fu exhibitions. I had moved back to Cleveland by this time and so missed the April 23-25 event at the Hotel Commodore. I would move back to New York for a few pretty awful months that year before moving back to Cleveland. I’ve been an Ohio resident ever since.

Maybe it’s because I was feeling pretty distant from Marvel at this time in my career - the transition from Roy Thomas to other editors hadn’t gone well for me - but this issue’s Marvel Bullpen Bulletins page seems flat to me. “Stan Lee’s Soapbox” name-dropped every big name he had met at the San Diego Comics Convention and segued into a plug for the upcoming Marvel-Con.

The first news item announced the summer’s 52-page, all-new, all-original annuals. Mentioned were: Fantastic Four by Roy Thomas and John Buscema and Iron Man by Steve Gerber and Sal Buscema. Said to on the schedule were annuals for Doctor Strange, The Avengers, The Incredible Hulk, Daredevil, The Mighty Thor, Captain America, Conan the Barbarian, Marvel Team-Up, Marvel Two-in-One, The Defenders, Master of Kung Fu, Luke Cage and Spider-Man. I wasn’t doing well, financially or physically, so I was only able to buy a handful of these annuals. I have a vague memory of someone at Marvel sending me packets from time to time, but it was probably on the down low.

The second item said the second set of those damned “Marvel Value Stamps” were an instant hit. I was and remain skeptical.

The third item announced a Tomb of Dracula/Doctor Strange crossover by writers Marv Wolfman and Steve Englehart. Both books were drawn by Gene Colan with inks by Tom Palmer.

Item four revealed that the “War of the Worlds” feature in Amazing Adventures would now be called “Killraven.”

The fifth item was a hodgepodge of snippets. Stan Lee appeared on the Mike Douglas show, Good Morning America and Tomorrow. Roy was one of the deceivers on To Tell the Truth. Sal Buscema was speaking about comics on radio and teaching seminars at his local library. Meanwhile, Doug Moench had bought and moved into a mini-mansion in the wilds of Pennsylvania. 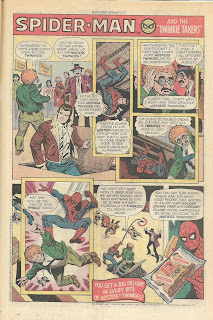 The one-page “Spider-Man and the Twinkie Takers” had armed gunman stealing all the Hostess Twinkies in a store. Spider-Man captured them. No Twinkies were harmed though Spidey was seen holding one in the last panel. The writer is unknown, but the page was pencilled by Ross Andru and inked by Mike Esposito.

The bimonthly Rawhide Kid was simply not very interesting to me at this time. The stories were being reprinted in order with the old covers. There wasn’t any new editorial matter. I was just was not feeling the old Marvel magic. To be fair, there wasn’t much Marvel could have done with the title other than switching up the order of the reprints. Marvel was stuck at 17 story pages and operating on budgets that seldom allowed for extras. Will that change before we get to the end of The Rawhide Kid? We shall see.

Posted by Tony Isabella at 9:38 PM