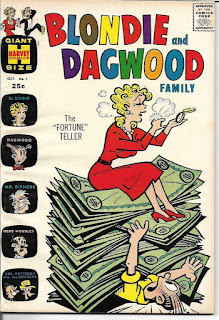 I continue my look at Harvey’s Blondie & Dagwood Family #1, a 68-page comic dated October 1963 that was too packed for me to cover in a single bloggy. As I wrote yesterday, The Grand Comics Database has no information on this issue, so I’m pretty much winging it here. Some of the material in this issue may be new stories created for this comic book. The rest appears to be cobbled together from daily and Sunday newspaper strips. We’re about halfway through the issue at this point.

Dagwood stars in the four-page “Big Date,” which seems to be a new story. A girl calls the Bumstead house looking for Alexander. She thinks Dagwood is his son and asks if he still wants to take her to the school dance. She hangs up before Dagwood gets her name. Alex comes home love struck about a girl named Linda. He’s upset when he hears his dad didn’t get the name of the caller. Then he apologizes and grills Dagwood about how the girl sounded. Apparently, hedging his bets, he asked two other girls to the dance in case the beloved Linda turned him down. Apparently, Alexander never read any Archie comics. But he did get advice from Dagwood about handling women and this infuriates Blondie. When Linda calls, she tells her Alexander is taking his mother to the dance...and then drags Dagwood out to a club so she can practice her dancing.

A one-page Dagwood “story” is two work-related daily strips shoved together. Dagwood is playing to stay home instead of going to work until Blondie says that, if he stays home, he has to take her to a sale at the Bon Ton. He hustles to work...where Mr. Dithers asks him what he would do about a lazy, shiftless, useless employee of the company. Dagwood says he’d fire him and asks who he is. “You!” shouts Dithers. Dagwood responds: “Don’t any attention to me, boss. My judgment is terrible!"

A two-page Dagwood “story” is four household cleaning daily strips. Blondie cleans like a fiend because she’s got a new cleaning woman coming. Dagwood directs (but does not help) Blondie bring a table  through a doorway and wonders “how a woman would get along without a man around the house.” Dagwood empties the vacuum bag outside and messes up the porch, curtains and washing of three neighbors. When Blondie loses the diamond from her ring, Dag finds it by sifting through vacuum cleaner sweepings. He finds it, but absentmindedly brings in the sweepings and throws the diamond in the trash can. He ends up going through the trash to find it.

The four-page “Civic Duty” has Dagwood lecturing his children about civic responsibility. Then he gets appointed dog catcher. It’s only a weekend job, so he accepts. Cookie, who is younger here than in the issue’s other stories, brings Daisy’s pups from the basement to congratulate the new dog catcher. Dagwood is trying to enjoy a bath at the time. The pups leave the bathroom and take over Dagwood and Blondie’s bed.

A one-page Dagwood “story” is either a Sunday strip or two dailies that have been edited. Dagwood makes a sandwich. Blondie asks him if he mailed the letters she gave him early. Dagwood answers with food in his mouth: Foonf slub goo nooph.

Blondie scolds Dagwood for talking with food in his mouth. A bit later, she asks him what on Earth he’s eating. His answer:

It’s just a Limburger cheese, garlic and onion sandwich.
Blondie disappears. The phone rings. Blondie is next door and she wants Dagwood to let her know when it’s safe to come home.

As the jester-in-the-box that was the Harvey mascot says these are “the funniest comics now on sale at your friendly dealer.” There’s also a plug for the new Casper’s Ghostland giant-size comic.

The next page is a house ad for the Casper TV show. Casper asks his readers to “Look for us on T.V.! Check the channel in your local newspaper!” In very small type, it lists all the stations that air the program.

A panel across the bottom of this page advertises a new cartoon show on ABC TV with Harvey Funnies. Shown are characters I’d never heard of: Sammy Spaceman, Bongo, Creepers, Dirty Dan, Silly Stork. The jester-in-the-box says “Look for me every Saturday morning!”

One more full page of house ads before we get back to the comics. This one advertises Hot Stuff with Stumbo the Giant and a quartet of Sad Sack titles: Sad Sack,  Sad Sack’s Funny Friends (with Hi-Fi Tweeter), Sad Sack and the Sarge and Sad Sack’s Army Life.

Blondie gets the logo in a one-page story that was almost certainly a Sunday strip. She wants to show her girlfriends the new bathroom curtains. Dagwood is taking a bath. She and the gals come in, but Dagwood gas ducked under the water. She doesn’t realize Dagwood’s there and goes to unplug the stopper. From under the water - don’t ask me how he manages this - he tells that if she does, he won’t be responsible. The ladies leave. Dagwood comes up for air. My best guess is that wolfing down those enormous sandwiches has increased his lung capacity. As far as Dagwood being able to speak from under the water...I got nothing.

Now it’s time for some guest strips that were likely Sunday strips when they first appeared. Otto Soglow’s “The Little King” gets two pages. This was a pantomime strip whose diminutive title character never spoke. In the first strip, he’s riding in a booth on top of a fellow ruler’s elephant. A strong wind blows the booth off, but it lands on an elephant in a zoo.

In the second strip, the Little King gets a gift from his people: a gum machine and a nuts machine. When he puts a coin in the gum machine, nothing comes out. He shakes it. His aide shakes it, But, in the last panel of the strip, nuts fall from the untouched second machine.

I wrote about “Colonel Potterby and the Duchess” yesterday. Their appearance in this issue consists of two pages worth of the their topper strip. The first page has the Duchess enamored of a handsome lifeguard. When she feigns needing rescue, the Colonel who comes to her aid and she bops him on the head several times. The lifeguard then rescues the Colonel.

The second page has two strips, each reduced to half a page. When they go to a history museum, the Colonel’s roving eye leads him to follow a shapely redhead. The Duchess grabs him and locks him into a pillory while she flirts with another man.

In the second of the half-page strips, the Duchess wants to water ski, but the boat costs $10 an hour. Then she spots a water truck and has it spray water while pulling her along. I’m not sure that the science works on that one.

The next two pages present a pair of text stories with house ads running along the bottom of each page. “The Sorrowful Dragon” has an unhappy dragon who just wants to be friends with the residents of a peaceful farming village. They are terrified of him. When the villagers set a trap using Berta, the most beautiful and wisest of the town maidens, she discovers that the dragon just wants to make friends. Which they all do.

Below the story, there’s a Sad Sack house ad in the form of a comic strip. He complains that he’s loaded with work because every time Harvey puts out a new Sad Sack comic, he has to do more work. Now unemployed, Sad Sack should have enjoyed his fame while he had it.

In “Party Dress,” young Cindy bemoans that she can’t go to a party out of fear the other girls with their new dresses will make fun of her faded dress. At the Party Shop, she spots the prettiest dress she has ever see, but knows she can’t afford it. As she looks down at the sidewalk, she sees an envelope marked “Party Shop” and it’s filled with cash. She returns the envelope to the store and learns it was their payroll. As a reward, she gets the dress she wanted. She’s going to the party!

Along the bottom of this prose story is a house ad for Blondie and Dagwood comics. It shows Blondie, Dagwood, their kids, their dogs, Mr. Dithers, neighbor Herb and Elmo, that kid who spends maybe too much time hanging with Dagwood.

The Katzenjammer Kids are next with two full-page “stories” taken from their Sunday strips. The Kids are two unruly boys created by  German immigrant Rudolph Dirks in 1897 and drawn by Harold H. Knerr for 37 years (1912 to 1949). A lawsuit between Dirks and the Hearst newspapers resulted in Dirks continuing the strip as “The Captain and the Kids” while the Hearst newspapers continued it under its original title.

Most Katzenjammer strips have one plot. The mischievous lads commit some mayhem. Then they’re caught and beaten...or about to be caught and beaten. Except for receiving their just beatings, they were the Donald Junior and Eric Trump of their day.

Mr. Dithers gets his own logo in a one-page strip almost certainly taken from a Sunday strip. When Dagwood turns a five-minute coffee break into a coffee and doughnut and sandwich break, Dithers fires him. Then he calls the newspaper to place a help wanted ad. Before the ad runs, Dagwood applies for his old job, citing his 15 years of experience in it. Dithers hires him to save the two bucks that the ad would have cost him.

A “Dagwood” one-pager is two daily strips put together, even though they have no connection. Dagwood sees a young boy crying because he is lost and buys him a ice-cream cone before taking the lad to his house. But, now the boy knows the way to his house because ”Ice cream makes me smart."

In the second daily strip, Dagwood sneaks up on Blondie to surprise her with a kiss. But she’s making mashed potatoes at the time and the spuds end up on Dagwood’s head with Blondie yelling at him to come back with the taters. Really, Blondie? You want to serve food covered in Dagwood’s hair oil? Ugh!

The next Dagwood one-page is also two daily strips. Cookie and her friends are playing hide-and-seek with Dagwood, who one of her pals proclaims is the best player ever. Then Dagwood falls out of a tree where he’s been hiding and has to be carried into his house by the children.

In the second strip, daughter Cookie and sleep-over friend Florrie want Dagwood to read them a story. As Dag reads a fearful tale of a terrible dragon decapitated by a brave knight, the girls fall asleep. But now Dagwood is afraid to go back to his own room, much less fall asleep. Dagwood disturbs me.

That’s the end of the issue’s editorial material, but we still have four pages of ads. We get a half-page ad for 100 Toy Soldiers for $1.25 teamed with a half-page ad for new issue stamps. A full-page ad offers 104 King’s Knights for $1.49.

On that bit of my legendary liberal sarcasm, we end this look at a comic from July, 1963. When this series-within-the-bloggy returns, we’ll have an issue of Boris Karloff Tales of Mystery.