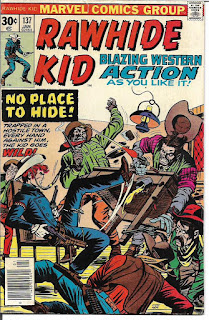 RESOLVED: The Rawhide Kid is my favorite western comics character and one of my favorite comics characters period.  This is why I’ve written over a hundred columns about him. Something about his short stature, but large courage, honor and fighting skills speaks to me.  After rereading the Kid’s earliest adventures when Marvel reprinted them in a pair of Marvel Masterworks and an Essential Rawhide Kid volume, I decide to reacquire every Rawhide Kid comic, reread them and write about them. We’ve reached the title’s extended twilight.  We’ve seen the last new Rawhide Kid story that will appear in the now-bimonthly reprint series. This is the 124th installment of my “Rawhide Kid Wednesday” columns. 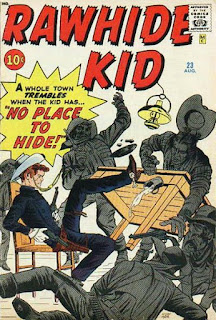 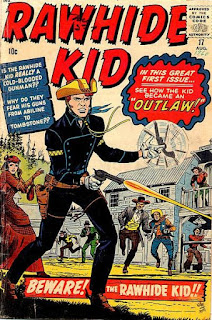 This issue has two Rawhide Kid stories. “Stagecoach to Shotgun Gap” by Stan Lee, Jack Kirby and Dick Ayers (6 pages) comes from Rawhide Kid #17 [August 1960]. That’s the first issue of title to feature the “new” Rawhide Kid. The previous sixteen issues starred a much older western hero. Here’s what I wrote about this story way back in 2012:

When the Kid boards the stagecoach, his presence unsettles the fearful passengers.  This is the first but not the last time that, for no good reason I can see, Rawhide will take the stage and leaves his horse...somewhere.  He earns the admiration, trust, and some homemade cake from his fellow passengers after he saves them from a trio of robbers.

This tale is also the first example of the Kid being not just good with his guns but absurdly good with his guns.  He shoots the masks off the robbers without hitting them.  The X-Men should travel back in time and sign this guy up.

“A Place to Hide!” (11 pages) mixes some by now familiar elements of Rawhide Kid stories.  We start with the Kid on the run from the law.  He flees to the “spooky-lookin’ town” of Sagebrush where no one recognizes him.  Sagebrush is dominated by bully Luke Stokes, but, though he itches to take Stokes down a peg, the Kid pretends to be a coward rather than lose this relatively safe haven. This is a disappointment to pretty Nancy Stokes, who had hoped someone had come along who could stand up to her brother.

Like Popeye in one of those cartoons where he promises Olive that he will not lose his temper, the Kid keeps himself in check until Montana Joe and his henchmen - Ox and Weasel - hit town. Montana tries to force himself on Nancy.  When Luke learns who his sister’s new admirer is, he turns tail: “Don’t be a fool, Nancy! Suppose he wants to be friendly--what’s wrong with that? Montana Joe’s a big man! Yuh--you oughtta be proud!”

You can practically see the steam coming out of Rawhide’s ears as he faces down Montana Joe and his goons for two pages of punching and shooting.  He finishes up by slapping around Luke for a couple panels while explaining life to him:

“There comes a time when a hombre can’t stand by and let jaspers annoy a woman--while her spineless brother looks the other way.”

Words to life by as the Rawhide Kid rides off into the sunset...on account of all of these story-ending battles take place late in the afternoon: 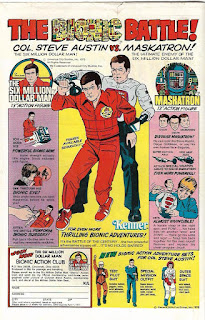 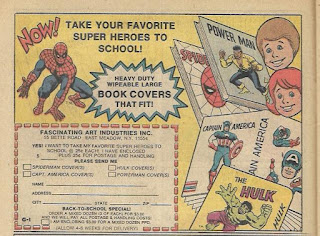 Fascinating Art Industries has a half-page ad offering Marvel hero “heavy duty wipeable large book covers that fit!” The four covers feature Spider-Man, Captain America, the Hulk and Power Man. They cost a quarter each plus another quarter for shipping and handling. 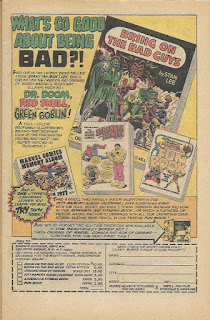 Simon & Schuster has a full-page ad for Bring on the Bad Guys, the newest collection of classic Marvel reprints. The cloth edition is $10.95. The paperback edition is $6.95. Also offered are the boxed set of Origins of Marvel Comics and Son of Origins of Marvel Comics for $13.95; the spiral-bound 1977 Marvel Memory Album Calendar for $3.95; the Mighty Marvel Strength and Fitness Book for $3.95; and  the Mighty Marvel Fun Book for $2.95. Postage and handling are paid for by the publisher. 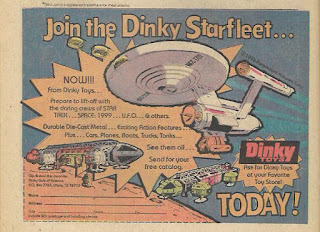 Dinky Toys has a half-page ad for the “Dinky Starfleet.” These are durable die-cast metal models of ships from Star Trek, Space 1999, U.F.O. and other shows. You could get a “free” catalog for half a buck postage and handling. 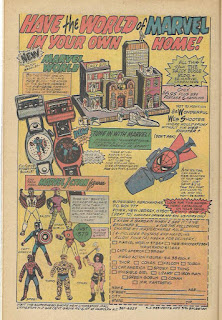 Remember Superhero Merchandise? They have a full-page ad this time around offering such delights as a Marvel World model featuring the Baxter Building, the Avengers Mansion and Doc Strange’s Greenwich Village pad for $7.84. Other items include Spider-Man Web Shooters ($2.56), Captain America and Spider-Man wrist radios ($11.64 each), and various Mego action figures at $4.38 each.

In the classified ads pages, there are 15 ads for mail-order comics dealers, down seven from the previous issue. In addition, there are also classified ads for John Buscema’s art classes and the Marvel Comics Index.

The same Marvel Comics subscription ad that’s been running for the past several issues runs in this issue as well. 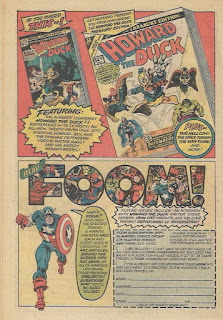 Another Marvel house ad consists of a half-page ad for the Marvel Treasury Edition featuring a brand-new 27-page team-up of Howard and the Defenders and some classic reprints. The bottom half of the page is a pitch for Marvel’s F.O.O.M. (Friends of Old Marvel) fan club and fan club magazine. 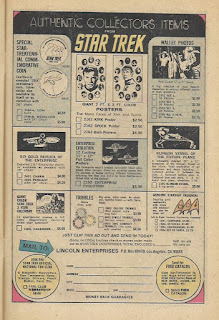 Lincoln Enterprises has a full-page ad offering a variety of Star Trek collectors item. There are posters, coins, tribbles, photos, replicas and more. You could join the Star Trek Official National Fan Club for six bucks or send away for a free catalogue.

That brings us to this issue’s Marvel Bullpen Bulletins page. This time around, “Stan Lee’s Soapbox” sings the praises of Bring on the Bad Guys and John Buscema’s comic-book workshops. Stan mentions Bob Hall, identified as one of Buscema’s students, who has drawn issues of Champions and Super-Villain Team-Up.
Most of the news items are for various Marvel comics: Logan’s Run by Gerry Conway, George Perez and Klaus Janson; Black Panther by Jack Kirby; Ms. Marvel by Conway, John Buscema and Joe Sinnott and two annuals: Marvel Team-Up and Dr. Strange. Representing Marvel’s black-and-white magazines, there’s an announcement of a giant-size special revival of Unknown Worlds of Science Fiction.

In personal news, Herb Trimpe and Linda Fite were congratulated on the birth of their daughter, Amelia Fite Trimpe. Gerry and Carla Conway moved from Manhattan to Connecticut. Roy Thomas finally made his move to California. Roger Slifer and Dave Kraft were somewhere as they hitchhiked to Oregon. Those crazy hippies!

The page wrapped with a tiny tease for Spider-Woman. She was coming soon in Marvel Spotlight! 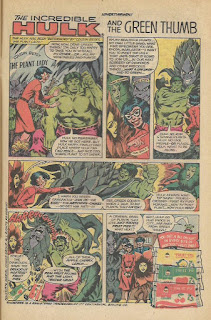 Hostess Fruit Pies were the big delights sought by hero and villain alike in “The Incredible Hulk and the Green Thumb.” There are, of course, no credits, but I’m seeing some Dave Cockrum in this one. This is a particularly crazy Hostess ad, what with the Plant Lady and her anthropomorphic hench-plants Mari Gold, Rhoda Dendron and Artie Choke. 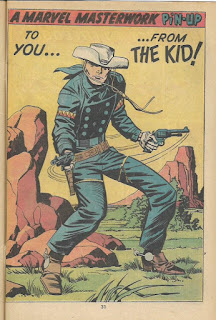 Reprinted from issue #43 [December 1964], this issue’s Rawhide Kid pin-up was penciled by Jack Kirby and inked by Paul Reinman. 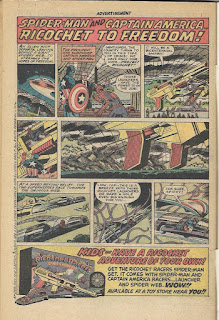 That’s followed by another comic-strip ad featuring Marvel heroes. “Spider-Man and Captain America Ricochet to Freedom!” This weird Hasbro toy was a rifle and a cartridge with a small car inside it. Once the cartridge was loaded, the rifle could be put on the floor at an angle. When the rifle was fired, the car would shoot out and speed across the floor. The Spider-Man version of this toy came out in 1975 and was a bigger hit in England than it was in the United States. Who drew the ad? The panels are too small for me to hazard a guess. 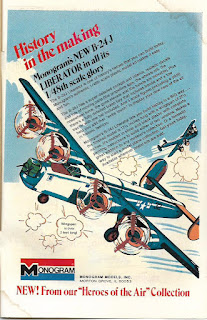 Monogram Models had the inside back cover of this issue, offering its new B-24 J Liberator 1/48th scale plastic model. When finished, the model was 17-and-a-half-inches long with a wingspan of 27-and-a-half inches. 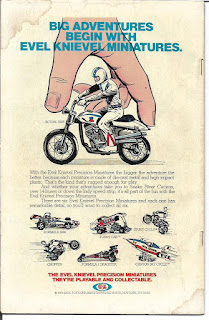 Ideal had the back cover of this issue. The Evel Knievel Precision Miniatures were made of die-cast metal and high impact plastic said to be “rugged enough for play.” There were six different miniatures shown in the ad.