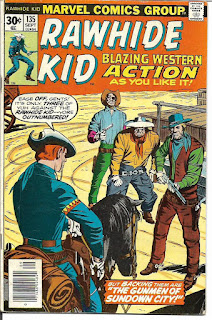 RESOLVED: The Rawhide Kid is my favorite western comics character and one of my favorite comics characters period.  This is why I’ve written over a hundred columns about him. Something about his short stature, but large courage, honor and fighting skills speaks to me.  After rereading the Kid’s earliest adventures when Marvel reprinted them in a pair of Marvel Masterworks and an Essential Rawhide Kid volume, I decide to reacquire every Rawhide Kid comic, reread them and write about them. We’ve reached the title’s extended twilight.  We’ve seen the last new Rawhide Kid story that will appear in the now-bimonthly reprint series. This is the 122nd installment of my “Rawhide Kid Wednesday” columns. 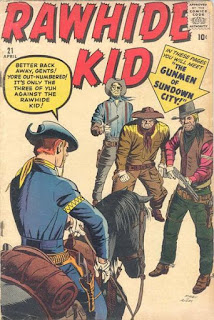 Reprint editor Roger Stern returned to Stan Lee, Jack Kirby and Dick Ayers for The Rawhide Kid #135 [September 1976]. The Kirby/Ayers cover is the original cover from issue #21 [April 1961] with some alterations. Backgrounds have been added, the Kid’s shirt is darker and the white background of the original has been replaced with a red background for the logo. The old cover copy has been replaced with new and, to my mind, stronger cover copy.

This issue reprints “The Gunmen of Sundown City” from Rawhide Kid #21. The original version ran 19 pages. This version runs 18 pages with a page cut from the second chapter of the four-chapter tale. I wrote about this story all the way back in March of 2012. You can read my comments here.

The Junior Sales Club of America gets the inside front cover with other advertisers including Duraclean International (information on buying a franchise), Grit Publishing, Charms (offering a special magic set for $3 with five wrappers from the lollipops), La Salle Extension University, Icee (with a coupon worth ten cents off the frozen treat), Hostess Snack Cakes (offering free baseball cards in specially marked boxes), 204 Revolutionary War Soldiers for a mere $2.25) and the Olympic Sales Club.

In the classified ads pages, there are 16 ads for mail-order comics dealers. That’s down one from the previous issue. 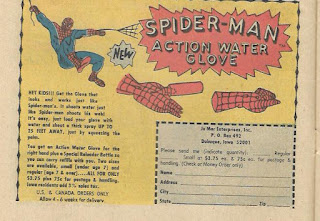 Before we get to the Marvel house ads, there’s a half-page ad for a “Spider-Man Action Water Glove” from Jo Mar Enterprises. The ad says it looks just like Spider-Man’s glove and shoots a thick spray water up to 25 feet by squeezing the palm. Just like Spider-Man shoots his webs. The cost (including postage and handling) is $4.50 per glove. 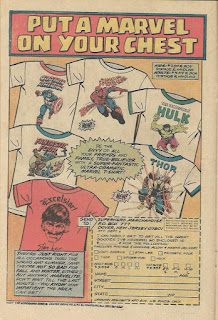 The first of the Marvel house ads is a full-page “Put a Marvel on Your Chest” pitch for the t-shirts advertised in the previous issue of Rawhide Kid. It’s the same six shirts: Captain America, Amazing Spider-Man, Incredible Hulk, Fantastic Four, Thor and...Stan Lee! The gender discrimination from the previous issue is gone. Instead of man and boy size, we have adult sizes ($3.99 each) and kid sizes ($3.39 each). Progress! 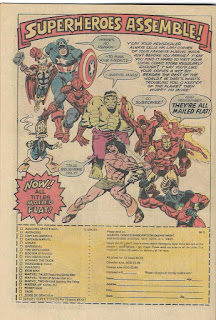 The Marvel Bullpen Bulletins page leads off with the usual “Stan’s Soapbox.” Stan announces that Marv Wolfman is leaving his editor-in-chief position for a full-time writing schedule, but keeps the fans guessing is to who will replace Marv. Last time out, the page announced Larry Lieber had returned to Marvel to be art director of Spidey Super Stories. This time around, Stan announces Larry will also be handling Marvel’s British weeklies. For a big finish, Stan plugs The Mighty Marvel Superheroes Fun Book, a $2.95 collection of puzzles, riddles and games based on Marvel characters.

Now for the news items...

Roy Thomas is relocating to Los Angeles. On his way cross country, he created What If, but the item doesn’t reveal exactly what this new title will feature.

Steve Englehart has taken up astrology. In between his writing on  Doctor Strange and Avengers, the San Francisco-based Englehart was preparing horoscopes commercially. I guess snake oil wasn’t as big a seller on the West Coast.

The next item talks about how Marvel’s Bullpen crew and freelance creators often frequent the Brillo Coffee House where the dine on the restaurant’s “famed Bunsen Burner Burger.” If the item weren’t less than complimentary, I would be wondering if this was an early example of comic-book product placement.

The final item of the page announced that Steve Gerber had gotten permission to manufacture and sell “Howard the Duck for President”  buttons. Including postage, the buttons cost $1.25 each. You could order them from Mad Genius Associates on Seventh Avenue. I may be off on the principals, but Mad Genius was a studio set-up shared by Gerber, Mary Skrenes, David Anthony Kraft and Jim Salicrup.

Sidebar. These good friends were a big help to me when I left what I have described as my “six hellish months as a DC Comics staffer” and was in between living arrangements. They let me stay there for a week or two. Which probably saved my life and certainly saved my sanity. I’ll never forget their kindness. 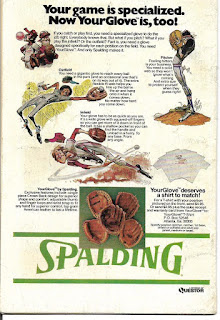 That brings us to the issue’s back cover. It was a full-page ad for Spalding baseball gloves and t-shirts. The ad is notable because it was drawn by the legendary Jack Davis.

That’s it for another Wednesday with the Rawhide Kid. I’ll be back tomorrow with more stuff.

Posted by Tony Isabella at 9:02 AM