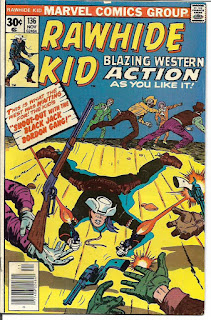 RESOLVED: The Rawhide Kid is my favorite western comics character and one of my favorite comics characters period.  This is why I’ve written over a hundred columns about him. Something about his short stature, but large courage, honor and fighting skills speaks to me.  After rereading the Kid’s earliest adventures when Marvel reprinted them in a pair of Marvel Masterworks and an Essential Rawhide Kid volume, I decide to reacquire every Rawhide Kid comic, reread them and write about them. We’ve reached the title’s extended twilight.  We’ve seen the last new Rawhide Kid story that will appear in the now-bimonthly reprint series. This is the 123rd installment of my “Rawhide Kid Wednesday” columns. 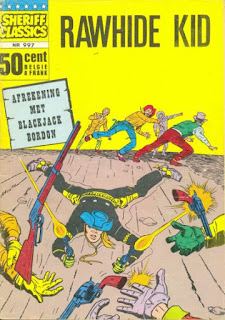 The Rawhide Kid #136 [November 1976] has a “new” Jack Kirby cover. As uncovered by comics detective Nick Caputo, it’s the unpublished cover to Rawhide Kid #20 [February 1961], which was first printed as the cover of 1968 Dutch reprint Sheriff Classics #997. Both of the covers were inked by Dick Ayers. 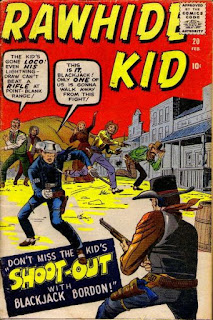 Both of this issue’s Rawhide Kid stories are reprinted from issue #20: “Shoot-Out with Blackjack Bordon” by Stan Lee, Jack Kirby and Dick Ayers (13 pages) and, by the same creators, “The Defeat of the Rawhide Kid” (5 pages). The two stories are reprinted without any cuts and I didn’t spot any editorial changes between the originals and the reprints. I wrote about this issue on March 14, 2012. You can read my comments here. 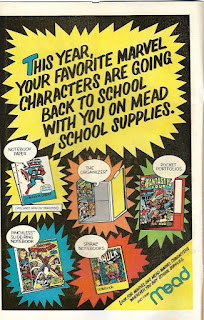 The inside front cover is a full-page ad for Mead school supplies. All of the items have Marvel characters on them. I’ve seen several of these items over the years, but, as best I can recall, I never owned any of them myself.

This issue’s non-house ads included the U.S. School of Music, which offered the secret of teaching yourself music at home in your spare time; Slim Jim smoked beef snacks; Grit Publishing, recruiting kids to sell their Grit newspaper; Universal Bodybuilding on the inside back cover and La Salle Extension University on the back cover. As I’ve mentioned, even as a kid, I never sent away for any of these things. If it wasn’t comics, I wasn’t interested.

In the classified ads pages, there are 22 ads for mail-order comics dealers. That’s up six from the previous issue. In addition, there were classified ads for a Marvel Comics Index and The Buyer’s Guide for Comics Fandom. 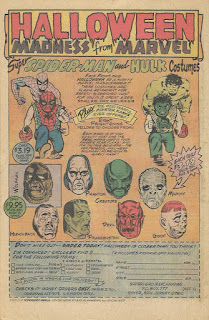 The first actual Marvel house ad is a full-pager hawking “Halloween Madness from Marvel.” There are Spider-Man and Hulk “costumes” at $3.94 each and eight different “fearful monster masks” for $10.53 each. Those prices include postage and handling.

The subscription ad from the previous issue of Rawhide Kid is back in this issue. It’s the same as the ad we showed you in last week’s Rawhide Kid bloggy thing. 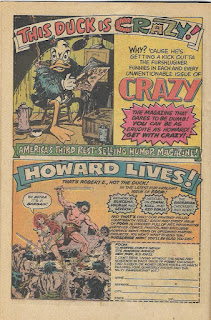 Half-page house ads for Crazy magazine and the fan club FOOM share a page. The former has a Howard the Duck illustration most likely drawn by Marie Severin. The latter announces that the latest issue of the fan club magazine will be devoted to Robert E. Howard, Conan and other REH creations.

This issue’s Marvel Bullpen Bulletins page kicked off with a “Stan Lee’s Soapbox” singing the praises of George Olshevsky’s indexes of Marvel comic books. I have a vague memory of seeing these enormous computer printouts of George’s work in the Marvel offices, but our fearless leader was plugging the first commercially-available index from George. It was the Marvel Comics Index of the Amazing Spider-Man and it covered the first 151 issues of the title as well as the annuals and specials.

The lead news item welcomed several “hitherto unheralded” staffers to the Marvel Bullpen. They included Karen Dougherty, Nel Yomtov, Warren Storob, Linda Taxel, and Michael Sandy. I had gone to work for DC Comics by then and returned to my native Cleveland, so I’m not sure I ever met any of these fine folks.

The second item announced a new Fantastic Four treasury edition for August. It focused on Doctor Doom, Sub-Mariner and the Frightful Four.

Item five announced a special issue of The Deadly Hands of Kung Fu that would feature a comics biography of the legendary Bruce Lee. It was written by John Warner, pencilled by Joe Station and inked by The Tribe. 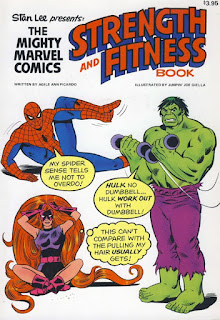 The final news item of the Bullpen page announced The Mighty Marvel Comics Strength and Fitness Book from Simon and Schuster. It contained exercises described by various Marvel super-heroes. I don’t think I ever saw the book, but I may have to look for it at conventions or online. It would be a fun addition to my famous/infamous Vast Accumulation of Stuff.

At the bottom of the Bullpen page, we get the roster of the Marvel editorial brass: 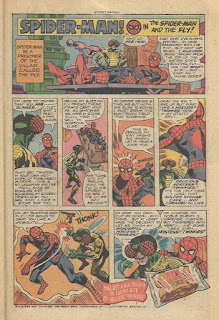 The Hostess comics-style ads are back with Spider-Man appearing in “The Spider-Man and the Fly!” This incredibly wordy sales pitch for Hostess Twinkies was pencilled by Ross Andru. My best guess for the inker is Frank Giacoia. 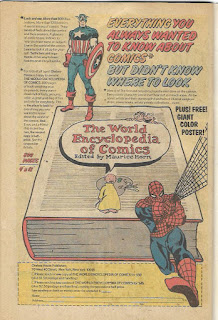 There’s one more noteworthy ad in the issue. It’s a full-page pitch for The World Encyclopedia of Comics from Chelsea House Publishers. Edited by Maurice Horn, the 800-page book was available for $31.50 (including postage and handling). However, you could get two copies for $47.50 (including postage and handling). I owned this volume at some point in my life and, given the state of my Vast Accumulation of Stuff, I might still own it. I hope it turns up eventually.

That’s it for this installment of “Rawhide Kid Wednesday.” I’ll be back soon.

Posted by Tony Isabella at 8:05 AM