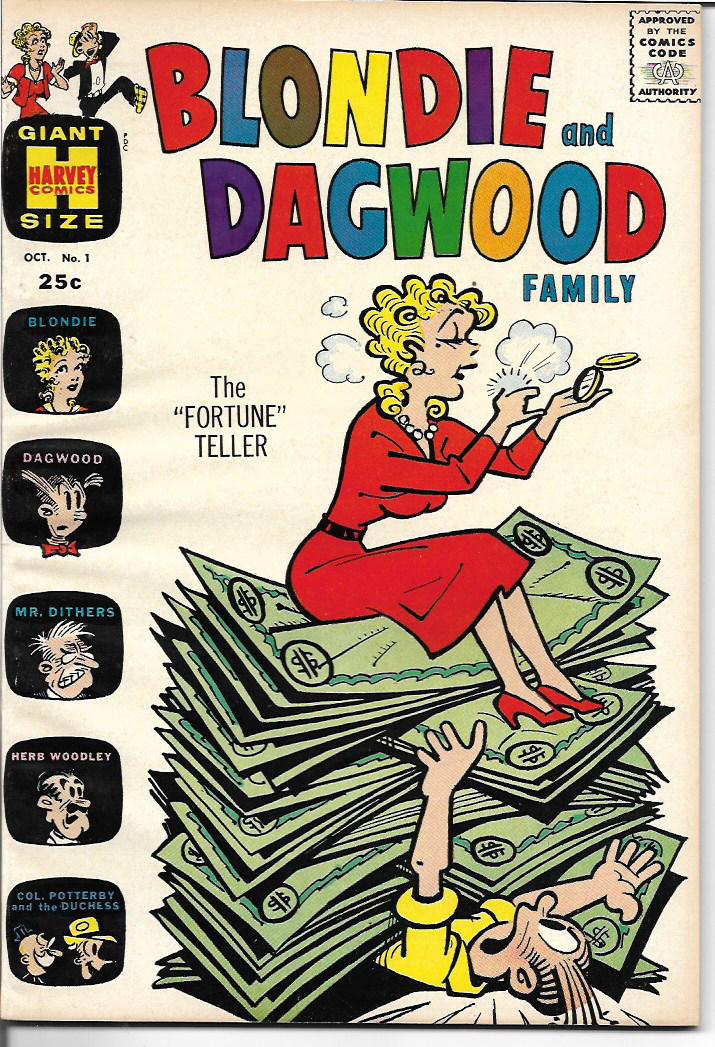 Welcome to what I’m considering “Volume Two” of my 136-part series on the comic books that arrived on the newsstands in July 1963. As I’ve explained in previous installments of this series, that month was pivotal to my own comic-book career because it was the month when Fantastic Four Annual #1 ignited my desire to write comics.

I’m thinking in terms of “Volume Two” because the previous columns in this series have been collected in July 1963: A Pivotal Month in the Comic-Book Life of Tony Isabella Volume One. The columns that appear in that softcover book were rewritten as needed with bonus material added to the mix. The book is available from Amazon in two formats: Kindle and actual print.

Today we’re looking at Harvey’s Blondie & Dagwood Family #1, a 68-page comic book dated October 1963. The Grand Comics Database has no information on this issue, so I’m pretty much winging it here. I’m guessing the unsigned cover might be by Paul Fung Jr., who, like his father, Paul Fung, assisted Blondie creator Chic Young on the very popular newspaper comic strip. Fung the second drew Blondie comic books for forty years.

How popular was Blondie? The strip has been running since September 8, 1930. It still appears in the United States and in hundreds of newspapers across the country and the world. From 1947 to 1976, in the hands of various comic-book publishers, there were nearly 400 issues of Blondie or Blondie spin-off issues.

From 1938 to 1950, Blondie starred in 28 movies. These were low-budget B-features, but very popular with the audiences of the day. From 1939 to 1950, there was also a Blondie radio program. There have been two Blondie TV sitcoms, though neither last more than one season (1957 and 1968-69). There have been a few animated specials over the years. In addition, Blondie and Dagwood made a cameo appearance in Jim Henson’s Muppet Babies and Dagwood made three silent cameo appearances in the CGI animated Garfield Gets Real.

Merchandising? During the strip’s heyday, it was off the hook. To quite Wikipedia:

A counter-service restaurant called Blondie's opened at Universal Orlando's Islands of Adventure in May 1999, serving a traditional Dagwood-style sandwich. In fact, Blondie's bills itself as "Home of the Dagwood Sandwich." Lunch meats featuring Dagwood can be purchased at various grocery stores.

Harvey Comics enjoyed considerable success with Blondie. From 1950 to 1965, the company would publish 310 Blondie comic books. Given the appeal of the comic strip to kids and adults alike, I wouldn’t be surprised to learn many of the comic-book customers were adults and many of those were women. Which brings us back to the subject of today’s July 1963 installment.

The cover shows a symbolic scene from “The Fortune Teller,” a story that doesn’t actually appear in this issue by that title. It seems to refer to the first two stories in the issue. Along the side of the main image, we get TV screen-like shots of Blondie, Dagwood, Mr. Dithers, Herb Woodley...and Colonel Potterby and the Duchess. The last two were the stars of Blondie’s topper from 1964 to 1963. Wikipedia explains what a “topper” is:

A topper in comic strip parlance is a small secondary strip seen along with a larger Sunday strip. In the 1920s and 1930s, leading cartoonists were given full pages in the Sunday comics sections, allowing them to add smaller strips and single-panel cartoons to their page. Toppers usually were drawn by the same artist as the larger strip. These strips usually were positioned at the top of the page (hence their name), but they sometimes ran beneath the main strip.

The inside front cover of this issue is an ad for the Cheerful Card Company. Did you need extra money in 1963? It would cost you nada to try to make $75 dollars. All you would have to do is sell 100 boxes of the company’s Christmas cards.

True confession. I’m not always sure which of the comics featured in this issue are reconfigured reprints from the Blondie and other comic strips and which are original stories. I’ll make guesses here and there, but you should not consider those carved in stone. When and if I get additional information from my readers, I’ll include that in the comments section and, of course, update this entry when it’s collected in the next volume of my July 1963 series of books.

The two-page “The Crystal Ball Knows” has Blondie consulting with a fortune teller who tells her she’s way too hot for the likes of Dagwood. Just kidding. He tells her she will meet a handsome man, take a trip and receive money. Dagwood makes fun of her, then buys a Clark Gable mask to fool her. She thinks he’s an intruder, sics their dogs on him, beats him with a baseball bat and, when she sees it’s her hubby, throws him out a window. When did these two become Maggie and Jiggs? This two-pager could have been a Sunday strip reprint, but I think the next two stories are originals.

“Won and Lost” and “Gold’n Daze” (each 5 pages) continue from the two-pager. Blondie has very good luck and finds a gold nugget worth $200. Of course, by the time Dagwood hears the news, neighborhood gossips have upped the value to $20,000. Dagwood goes in search of the fortune teller, only to find the police arrested him and shut down his phony operation.

That’s followed by an untitled two-pager that could have been from the Blondie Sunday strip. Dagwood can’t sleep and then can’t wake up. The punch line has him brushing his teeth with shaving cream.

Dagwood gets solo billing for the next two stories: “Knucklehead” (5 pages) and “Party Boy” (4 pages). In the first, Dagwood screws up the work of the plumber who had, unbeknownst to Dagwood, fixed their sink, runs into his old high school teacher who remembers him by his nickname of “Knucklehead” and gets the date wrong on when the Woodleys invited them to dinner. He and Blondie prepare dinner at the Woodley house. Their neighbors were going to the ballet but came back for their forgotten tickets. When the Bumsteads return, the meal has been eaten. Poor Dag! This feels like a story cobbled together from a couple Sunday strips and a daily strip.

“Party Boy” seems more like an original story. Mr. Dithers will be away on a business trip for a week. Dagwood plans a party. Until he realizes he forgot to give his boss his passport. He ends up stuck on the plane, missing his party. When next we see Dagwood and his boss, Dithers is thrilled they finished the business a day early. But Dithers can’t go home because his house is being painted and, since neither he nor she can stand the smell of wet paint, his wife is away. Dagwood invites to stay with him at his house, only to be attacked by the women attending Blondie’s slumber party. He and his boss ends up at the Dithers house, trying to sleep with clothespins on their noses.

This story is followed by eight stories of one and two pages each. My guess would be these are reprinted daily and Sunday strips from the newspapers. Some quick synopsis:

An impatient Dagwood has to wait for a haircut because the second barber is getting a haircut from the first. When he’s in the chair, Dagwood fumes as the barber says “Hair today and gone tomorrow!” The barber says it’s a little joke he tells to kill time. Dagwood responds that the barber certainly has a wonderful weapon.

The Bumstead kids come home from school, ignoring Blondie to raid the refrigerator. Dagwood gets peeved when Alexander spends a half-hour in the mirror trimming a non-existent mustache. Alexander asks for ten bucks to buy a jacket like all the other guys are wearing. Dagwood says he never did anything because everyone else did it and Alexander points out that his dad is shaving. Finally, Alexander is taking money out of his bank to buy a birthday present for his gal. When Blondie tells him that he shouldn’t spend money and think of is future, he says if he doesn’t buy his girl a present, he won’t have any future. This two-pager is pretty obviously four separate daily strips.

The next two-page story is also four daily strips cobbled together under one logo. Dagwood mistakes dressing for work with undressing for bed and goes back to bed. Blondie runs out of eggs. Blondie is peeved when Dagwood reads the newspaper at breakfast. Dagwood does not have time to shave, earning the ire of both his wife and his boss.

A one-pager finds Dagwood shopping with Blondie and it’s not going well for him. He’s embarrassed to go into a lingerie shop with her. She drags him in because she wants lingerie the same color of pink as Dagwood’s embarrassed face.

Another one-pager has Blondie and Dagwood at a restaurant. Dagwood complains about the five dollar price of fresh broiled lobster and the waiter tells him their lobsters are flown here daily by plane and on ice. Dagwood asks if they have any that just hitchhiked.

Another one-pager has Dagwood vexed by door-to-door salesmen. But he agrees to sign a petition to keep such salesmen from bothering people. He doesn’t read it first and unwittingly orders a year’s subscription to Cat Lovers Journal.

Another one-pager is comprised of two daily strips. In the first, Dagwood has taught their dog Daisy to scrub his back in the bathtub and Blondie gets jealous, wondering if he’s going to teach the dog to cook. In the second, everyone is too busy to play checkers with Dagwood. Except Daisy. Dag asks: “How do you know you can’t play if you don’t try?”
The final one-pager in this bunch has Dagwood fighting with next-door neighbor Herb. Dag sticks a wet mop in Herb’s mouth. Blondie makes him apologize. Herb says Dag’s only apologizing because his wife made him and a new fight commences. 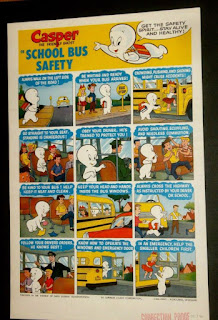 Casper the Friendly Ghost makes a one-page appearance in a public service announcement about “School Bus Safety.” I don’t know if you can read it in the above image, but the PSA was brought to you by Superior Coach Corporation of Lima, Ohio ad Kosciusko, Mississippi. I’d love to see PSAs return to modern comic books.

Goodyear is next with a full-page ad for its bicycle tires. Because a tough newspaper route requires tough tires.

This look at Blondie & Dagwood Family #1 is hitting the 2,000-word mark, so I’m splitting it into two parts. Look for the second part sometime later today. See you then.