TUESDAY MORNING THIS AND THAT 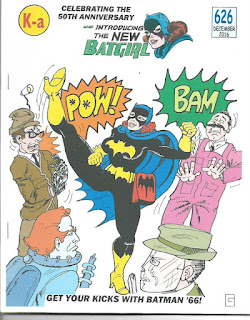 The cover shown above was by Douglas Jones aka Gaff, K-a’s Central Mailer. Haas stepped in while Gaff was recovering from a series of health problems. From what I’ve been told, the apa continues in an electronic format of some sort.

Before the coming of the Internet, CAPA-Alpha was the place to be for comics fans. At its height, it might have had as many as sixty members plus another dozen or so fans waiting on the wait list for an opening. Some of those on the wait list would contribute to the zine, even though they could not be guaranteed a copy of mailings in which they appeared. Some mailings were well over 500 pages. I apologize for not being more specific. My only connection with K-a in the past decade or so has been limited to receiving apazines from friends who were still in the ever-aging association.

I was recruited to join CAPA-Alpha by then Central Mailers Don and Maggie Thompson. It was exciting in those pre-Internet years and I was on and off the roster for decades. I was even a member after I became a comics professional.

What dulled my interest in K-a was technology. I’d write zines of twenty pages or more, paste them together with whatever art I could find, take them to the local Mail Boxes Etc, print off however many copies were required plus some extras, mail the required copies to the Central Mailer and then wait months for some kind of feedback. It was like unto watching paint dry.

Then I started writing online columns, culminating in this bloggy thing of mine. Less work. Easy publication. Instant response from my readers. I was done with apas forever, even electronic versions thereof. This bloggy thing suits me much better.

Still, in its day, CAPA-Alpha was where I made lots of friends that I cherish to this day. Where I learned a lot about comic books from before my time and from across oceans. Where I honed my craft as a writer. I’ll always honor it for those things.

CAPA-Alpha deserves to be remembered and honored. It’s too bad the Eisner Awards don’t have a Fan Hall of Fame. Because K-a deserves to be in it. Heck, when you consider how many comics professionals got their creative starts in K-a, I don’t think it would be out of line for the apa to be named to the existing Hall of Fame. 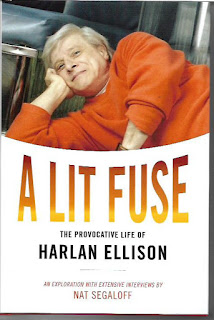 Reading A Lit Fuse: The Provocative Life of Harlan Ellison by Nat Segaloff [NESFA Press; $35] was like spending a long evening well into the dawning hours with my friend Harlan. Ellison gave Segaloff unprecedented access to his history and world. What emerged was a definitive biography of a man who is arguably the greatest writer of our time.

From Harlan’s earliest years to his present-day circumstances, this book tells all without holding back even the ugliest moments of a life lived large. I’m fond of saying that we are all the heroes of our own stories, but Ellison has the courage and integrity to talk about even the roughest edges of his personality. It’s a stunning story that, ultimately, made me love my friend even more than I did before I started reading.

Sidebar. In one sense, I owe Harlan my life. When I first moved to New York to work in comics, I lived in a tiny basement apartment in Brooklyn. My cheap-ass landlords had managed to divert most of the house’s heat to the upper floors of the house. I had no thermostat to control the heat in my part of the house and so had to spend my nights either buried under every blanket and coat I owned or at a small writing table I would move in front of the electric stove. I would write in front of the stove’s open door.

One day, before I started coming into my own as a writer, I felt so terribly alone that I planned to use my next paycheck to fly back to Cleveland for good. Then I started reading, re-reading really, Harlan’s introductions to the stories in his Dangerous Visions and Again Dangerous Visions anthologies. Just the introductions. Which so often spoke of the nobility of the writer. Ellison’s words were inspirational. I stuck it out and I’ve kept at this writing thing ever since.

Are there some contradictions in this account of the writer’s life? Of course there are. He’s a storyteller and stories change as they age. Like fine wine. But there is a core truth to every one of his  stories, both the ones I heard from Harlan himself and those I was just “hearing” for the first time. Imagine my delight when Harlan spoke about a story he wanted to write based on an old joke when I realized I’d already a story based on the same joke. I guess, over my years of reading his work and being blessed with his friendship, I learned a thing or two.

A Lit Fuse is a magnificent biography. I hope it receives a whole bunch of awards. Because it deserves them. 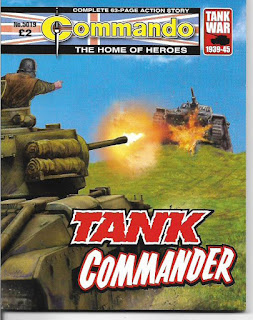 From the U.K., Commando #5019 features a brand-new, 63-page story. “Tank Commander” is by Ferg Handley with art by Vila. Tanks seem to be a popular subject in this long-running anthology series. Note the “Tank War 1939-45” block next to the logo.

Most story pages in Commando have two half-page panels. There are some splash pages and some with three panels, but two panels is the most common. Roughly speaking. Going by the old American standard of around six panels per page, that means the Commando stories are the equivalent of a 21-page story. That length gives its stories room for plenty of character drama in addition to the many battle scenes.

This story has two protagonists even though they never meet face-to-face. Sergeant Jack Taylor’s tank crew are killed in a massive German blitzkrieg offensive just prior to the retreat to Dunkirk. Taylor recruits a new and thoroughly inexperienced crew and must choose between getting revenge for his old team or protecting his new one. The German officer who led the offensive is determined to
see all of them dead. It’s a gripping battle tale that would have been shorter, but not out of place in the DC Comics war titles of the 1960s. 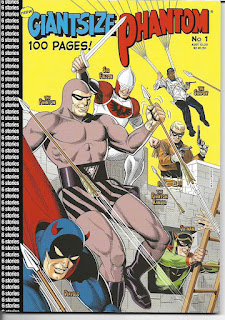 For several years now, I have been getting the Phantom comic books  by Frew Publications sent to me from Australia. As with Commando, I’m considering adding a reoccurring bloggy within the bloggy that would cover these comics. Does “Phantom Fridays” sound like something you might enjoy?

What you see here is Giantsize Phantom #1. It contains five action hero stories reprinted from the 1950s and one new story starring a hero from that era. The Phantom was the biggest Frew star, so most of the other heroes copied various elements of The Ghost Who Walks and his mythos. Besides a Phantom reprint, the roster consists of Catman and Kit, Diavolo (who got his start from a rejected Phantom story revamped to star a new character), the Phantom Ranger (set in America’s Old West, Sir Falcon (the new story featuring an updated version of the hero) and Jimmy Gray alias the Shadow (no relation to the classic American pulp magazine hero). Though derivative and often crudely written and drawn, these rare reprints are interesting for their historical value and perfectly readable adventure hero yarns.

I’m not sure how often Giantsize Phantom will be published, but I have asked my Australian supplier to include future issues with my shipments of the regular Phantom comics from Frew. I look forward to more of these lesser-known Australian adventurers. 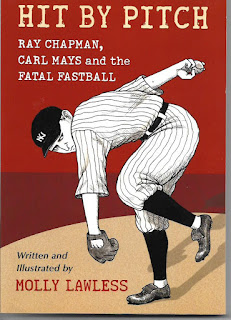 Cleveland sports fans are used to bad days and years, but there was never a more tragic day than the day when popular Cleveland Indians shortstop Ray Chapman was hit in the head by a Carl Mays fastball  and subsequently died from that injury.

Molly Lawless’ Hit by Pitch: Ray Chapman, Carl Mays and the Fatal Fastball [McFarland; $14.99] is a nonfiction graphic novel telling the life stories of both Chapman and Mays, the years leading up to that deadly moment and the aftermath of the event. It was published in 2012, but somehow escaped my notice until now.

This is a riveting work that brings the history and its players to life. Chapman was beloved in Cleveland and in the clubhouse. He and some teammates formed a singing group that would perform at various functions around town. He married the lovely daughter of a business leader and, in off season, ran his own business. He was a baseball superstar in every sense of the word. Had his career and life not been cut so terribly short, he’d be in the Hall of Fame today. He played just nine years and the minimum requirement, which has only been waived once, is ten.

Mays was not at ease in social settings, nor was he beloved by his teammates. He’s been painted by some as a villain who deliberately beaned Chapman, but Chapman’s book does not embrace that scenario. At the time, to save money, umpires were ordered to keep baseballs in the game as long as possible. The result were balls so scuffed up that pitchers couldn’t always control their pitches. Mays, whose stats could have otherwise put him in the Hall of Fame, has forever been defined by that one fatal pitch.

Lawless delivers a solid graphic novel that brings these forever-linked players and their era to life in great detail. She puts the deadly moment into perspective and, in doing so, makes the reader feel the tragedy all the more keenly. I will definitely be seeking out more of her work.

That’s all for today. Come back tomorrow for another installment of “Rawhide Kid Wednesday.” See you then.

Posted by Tony Isabella at 8:13 AM