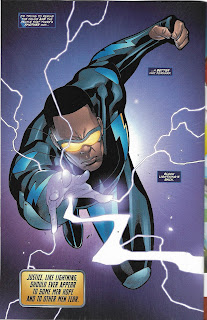 Black Lightning is the comics writing of which I’m most proud. He is my signature creation. The character has endured...despite years of malfeasance from the previous management of DC Comics. Indeed, he continues to gain new fans drawn to him by his hit TV series.

My most recent writing on Black Lightning was Black Lightning: Cold Dead Hands. The six-issue series received incredible critical acclaim, though, sadly, did not sell as well as DC Comics and I would have liked. There’s no guarantee there will be an ongoing series or that I would be writing it. If you want to make an ongoing series and my participation in it more likely, please buy large quantities of the forthcoming Black Lightning: Cold Dead Hands trade paperback. It would be a great gift for the comics fans in your lives.

Let DC Comics know that you want is an ongoing Black Lightning series written by me. Because, honestly, the success of the TV series has other writers casting their avaricious eyes on my creation. I continue to contend, perhaps immodestly, that I write Black Lightning better than anyone else.

Let’s get to today’s questions.

I can only imagine how gratified you must be to see your creation as a successful TV show. The characters seem very true to how they were created and I love the family dynamic. What were your favorite moments? Anything you would have done differently?

My absolute favorite moment in the first season came in the opening moments of the first episode. That’s when the voice-over narration included these lines from my comic books:

Justice, like lightning
Should always appear
To some men hope
And to other men fear.

Throughout the first season, I saw so much of myself in the show, coupled with the great acting, writing and new ideas brought to it by others. The stories were real-world edgy and it was clear every one working on the series felt the same commitment to the stories and the characters that I feel. It would take me thirteen blogs to express all my love for the series.

That said, my other favorite moment in the series was how the first season ended. A satisfying ending which lifted my spirits and also included a mild cliffhanger. That’s how a season should end.

Are there things I would have done differently or things I’d do in the future? In the case of the former, yeah, a few relatively minor things, too minor to mention.

In the case of the latter, well, I’m not going to go there unless invited to do so by the fine folks creating the show. I have ideas. How could I not? But they’ll remain unvoiced until the proper time. Whether I’m involved in the second season or not, I have the utmost confidence in the people who are involved.

Could you shed some light on the Black Lightning family dynamic. I understand from another post you did not want Thunder and Lightning to be Jefferson’s children. In your new comic-book series, they’re his cousins. Can you explain that one a little more?

The TV show went with its nuclear family version. Are you satisfied with the way it was handled?

Good questions. Let’s see if I can answer them quickly.

One of my biggest regrets from my original 1977 series, besides not getting my agreement with DC Comics in writing, was that Jefferson Pierce was divorced. I thought that was edgy, but it prevented me from showing a strong black family. Had I continued on my second series in 1995, Jefferson and Lynn would have remarried and started a family.

My main objection to Thunder and Lightning in the comic books is that I felt and still feel they were introduced badly and handled badly.  Indeed, when a less-than-tolerant writer wrote Thunder in a later incarnation of The Outsiders, he demeaned her at every turn. On the other hand, it could have been worse. I’ve been told one DC editor wanted the two girls to be the daughters that Jefferson didn’t know he had. Yeah, there are people that unthinking in comics.

I didn’t come to appreciate the possibilities of the girls until I saw them in a couple of short Black Lightning cartoons created by my friend Lynell Hakim Forestall. I loved his take on the family. However...

When I began work on Black Lightning: Cold Dead Hands, the TV show hadn’t yet signed Salim and Mara Brock Akil as show runners. I had no idea what the series would be at the time.

Told I could do whatever I wanted with my new Black Lightning comic series, I decided I would do things I had never done with Jefferson and his world before. I made him younger and smarter. He was not a married or divorced man. He had actual family and he was living in my own home town of Cleveland. In the first mini-series, Jefferson would meet Lynn Stewart for the first time.

But...I still wanted to use Anissa and Jennifer. My solution was to make them Jefferson’s cousins. They have powers and I know why they have powers. If I get to write more Black Lightning comics, you’ll see them train to and become heroes. Eventually, they would fill a  similar role to that of the daughters in the TV series.

In closing, a couple of quick announcements:

I need copies of Black Lightning: Cold Dead Hands #1 to sell at my convention, garage sale and other appearances. It would have been nice if DC had done a second printing of the issue, but, alas, they did not. If you’re a retailer with multiple copies to sell, please e-mail me to see if we can do a bit of business with each other.

“Black Lightning Beat” will continue to appear in this bloggy thing of mine on a regular basis. If you have questions on the TV series or my comic books, please send them my way and I’ll do my best to answer them as completely and quickly as possible. You can send me your questions via e-mail - my preferred method - or Facebook and Twitter private messages.