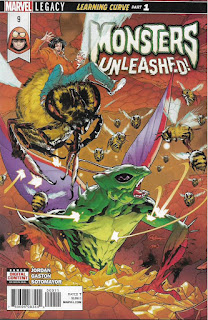 There are so many things I like to write about in this bloggy thing of mine. I read a butt-load of comic books from all over the world every week. I read mystery and police novels (usually set in Ohio). I read non-fiction books on subjects that interest me. I watch what  I realize is an obscene amount of television and tell myself I have to do this because so much of what I watch comes from the comics I  love. On a good week, I get to watch a cheesy monster movie or two.

I’ve been reviewing all the above for more columns and years than I can remember. I’ve been told my reviews are helpful to readers. I’ve been told the favorable ones help the sales on the things that I praise. I have no way of knowing if this is the case or not. But, since I like writing reviews and you seem to enjoy reading them, I figure I’ll keep doing this.

Marvel’s Monsters Unleashed [$3.99] seems like a super-hero comic book created by someone who asked the question, “What comic would Tony Isabella get a kick out of?” This series is a good answer to that question.

Kid Kaiju is Kei Kawada, a young Inhuman with the ability to create and summon monsters by drawing them. He’s been working with Damage Control, Elsa Bloodstone and others to use his power for good while trying not to make his loving parents too crazy.

Starting with issue #9, new writer Justin Jordan has been bringing us “Learning Curve,” a story arc in which Kei teams up with various creations for solo missions. These are solid complete-in-an-issue adventures that have been great fun.

Issues #6-11 are collected in Monsters Unleashed Vol. 2: Learning Curve [$17.99], due to be released in late May. Earlier volumes in the series - it started as a crossover event - are also available. 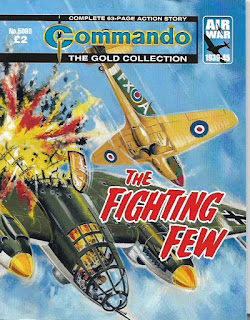 Commando #5060 features “The Fighting Few” by Maitland with art by Gordon C. Livingston, who also did the cover painting. This story is designated as an “Air War 1939-45" tale. It’s also part of the digest-size comic magazine “Gold Collection,” which denotes a story being published for the third time. This story originally appeared in 1969 and was reprinted in 1977.

Conflicts between fighting men is a standard plot device for these 63-page adventures. This time, the conflict is between a squadron leader who can’t be trusted and a flying officer who takes the law into his own hands to protect himself and his fellow pilots. Thanks the squadron leader, the flying officer’s reputation has taken some hits. This isn’t a classic issue of Commando, but it’s a solidly-crafted and entertaining story in a genre we don’t see often enough these days. 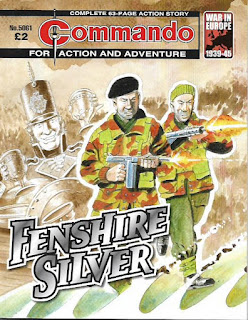 Commando #5061 presents the all-new “Fenshire Sliver” by George Low with artist Kieth Page, who also did the striking cover. This issue is designated “War in Europe 1939-45.”

Obsession is the theme of this tale, notable that of platoon leader Lieutenant Adrian Seacombe of the Fenshire Regiment. Seacombe cares only for his ancestor’s regimental silver. Private Harry Clark is a member of the elite class, but turns down a commission to serve with the regular soldiers. He and his best mate Joe Reagan lose the silver in France during what is known as the “Phoney War.” Because of this, Harry and Joe are on the front lines of Seacombe’s insane obsession with the silver.

This 63-page adventure has plenty of surprises, excellent character development and a most satisfying ending. It’s an issue that fuels my obsession to sometimes write an issue of Commando or another war comic like it. 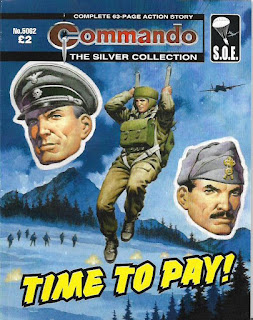 Commando #5062 reprinted “Time to Pay” by K.P. MacKenzie with art by C.T. Rigby and cover art by Ian Kennedy. The tale was previously published in 1993. It’s designated as an “S.O.E.” story.

The Special Operations Executive was formed from the amalgamation of three existing secret organizations. Its purpose was to conduct espionage, sabotage and reconnaissance in occupied Europe against the Axis powers, and to aid local resistance movements.

This story focuses on Captain Mario Celini’s unit. Though they were allies, the Germans treated the Italian soldiers like disposable cannon fodder. When the tides of war shift, Celini and his men join forces with a British officer to fight the Nazis and the vicious SS officer in charge of them. Not a classic adventure, but, like most of the Commando offerings, an entertaining read. 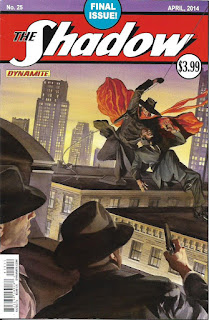 Inspired by the recent Batman/Shadow meetings I’ve read, I decided to finally read all the other Shadow comics published by Dynamite. I started with The Shadow #1-25 [2012-2014]. Written by Garth Ennis and then Victor Gischler and then Chris Roberson, this version of the classic hero has more of the mystic around him than in the pulp magazine stories I’ve been reading. It took a few issues for me to get comfortable with this.

Having accepted the supernatural elements, I really enjoyed these comics. As cold as the Shadow is, I found myself sympathizing with his never-ending quest for redemption and his burden of having to deal harshly with evildoers. That’s sort of his job description.

The comics were well-written with truly formidable villains. They had good art and visual storytelling. The Shadow’s aides were well played, especially Margo Lane and Burbank. Most importantly, every story arc had a satisfying conclusion.

I have a three-inch-high stack of Dynamite’s Shadow comics waiting for me. I’m suspect I’m going to enjoy reading them over the next few weeks. 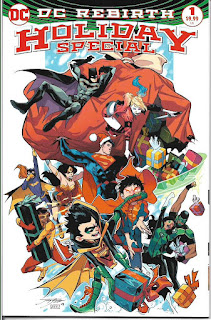 I’m a sucker for holiday-themed super-hero comic books. DC Rebirth Holiday Special [February 2017; $9.99] just turned up in the Vast Accumulation of Stuff that fills a great deal of Casa Isabella. It may be a year old and this might be several months after the last Christmas and before the next one, but the cover by Jorge Jimenez spoke to me. So here we are.

Paul Dini and Elsa Charretier provide “A Very Harley Holiday,” the introduction that wraps around the entire special. It’s fun stuff. There are two Harleys in my mind: the spritely one and the darker murderous one. I prefer the former, but the two have been used in an interchangeable manner. In the world where I make the decisions at DC, we either go with the former or established that there are actually two Harleys. Might be a way to freshen up the character.

There are ten stories of varying lengths in the special featuring Superman and Batman, Superboy and Krypto, Batman and Detective Chimp, Wonder Woman and Constantine, the Flash, New Super-Man, Batwoman, The Titans, Batgirl and Nightwing and the Green Lanterns. I’m not going to write a story by story review, but I will mention the highlights.

Tim Seeley’s Superman and Batman story - “The Last Minute” - was my favorite in the issue. Nice character work, some warm laughs and nice art by Ian Churchill. Whenever Batman is humanized, it strikes a happy place in my brain. The Batman/Detective Chimp team-up by Heath Corson and Gustavo Duarte was also fun.

The Titans appear in “What a Year for A New Year” by James Asmus. It’s a so-so story, but worthy of mention because it features the Silver Age villain Ding-Dong Daddy. I have to give the tale points for the groovy comeback.

Also worthy of mention was “The Epiphany” by writers Steve Orlando and Vita Ayala with art by V. Kay Marion and Tony Gray. Judgmental aliens challenge Green Lanterns Jessica Cruz and Simon Baz with the fate of Earth in the balance. This isn’t ground-breaking comics - we’ve seen this many times before - but the portrayals of Jessica and Simon elevate the story. I liked it.

I know there’s another DC holiday special or two in my boxes upon boxes of comics waiting to be read. When I find it, I’ll move it to the top of my reading pile.

That’s all for now, my friends. I’ll be back soon with more stuff. Have a great day.