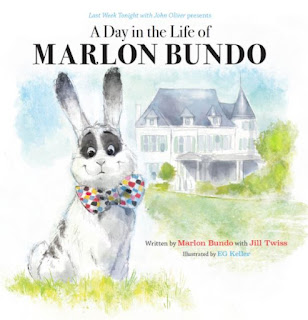 When it comes to prose books, most of what I read falls into these categories: mystery/police novels set in Cleveland or other parts of Ohio; non-fiction books on subjects that interest me or that I’m reading for research; comics history; novels featuring comic-book characters; novels by favorite authors like Max Allen Collins and Stephen King; and books that do not easily fit into any category. Like the first of the books I’m written about today.

A Day in the Life of Marlon Bundo by Marlon Bundo with Jill Twist and illustrated by EG Keller [Chronicle Books; $18.99] is a well-deserved kick in the nuts to homophobic Vice-President Mike Pence. Produced by Last Week Tonight’s John Oliver, it tells how Pence’s pet rabbit - Marlon - met the love of his life, another bunny named Wesley. It’s a charming tale with some bite to it in the form of a parody of Pence himself.

This book is a response to Marlon Bundo's A Day in the Life of the Vice President, a children’s book created by Pence and his family. Pence promoted the book at Focus on the Family, an anti-LGTB hate group. Because even though his book didn’t concern homosexuality at all, Pence lays down with bigots and racists at every opportunity. It’s in the job description as any one in the Dumpster President’s White House.

This is not a book everyone will want to share with their children. Myself, I would have no trouble reading it to my grandkids if I had any. With Pence and other pseudo-Christians promoting bigotry at a matter of course, it’s important to offer children a more tolerant view of the world. They are a hope for a better world. Unlike that sought by Pence and his ilk.

I love the book and will probably buy a few more copies to give out as gifts. And, yes, of course, it outsold the Pence book by a lot. Because it’s a better Bundo. 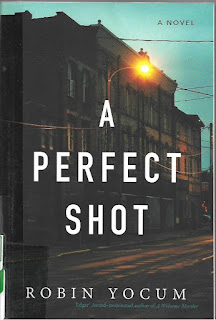 A Perfect Shot by Robin Yocum [Seventh Street Books; $15.95] is a crime novel set in the smallish Eastern Ohio steel town of Mingo Junction. It’s small enough that the town hero is Duke Ducheski, a steel worker who won a high school basketball championship and got his then-girlfriend, now-shrewish wife pregnant before he could go to college. It’s large enough to be profitable for the mobsters who run the town. One of the mobsters is Duke’s brother-in-law.

Duke has been saving money to open his own bar. He’s been trying to divorce his wife so he can marry his single-mom girlfriend. He is intensely loyal to his friends and they to him. When one of those friends does something stupid, Duke tries to help him, which sets in motion a series of violent events.

Yocum’s characters are solid creations and he writes well. Though there are times in the novel when people make really bad decisions that they should have known better than to make - an increasingly common and cheap plot device - I got hooked by the novel early on. It gets my recommendation.

Yocum has been an Edgar Awards finalist. After reading this book, I plan to check out his other novels. They are also set in my home state of Ohio, which is added incentive. 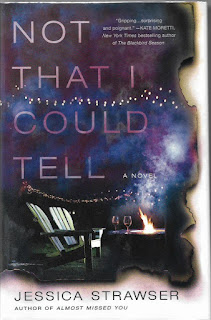 Set in the small Ohio town of Yellow Springs, Not That I Could Tell by Jessica Strawser [St. Martin's Press; $26.99] is a mystery novel that reminds me of TV’s Desperate Housewives. One night, a group of neighborhood women enjoy an evening of conversation, revelations, drinking and more drinking sitting around a backyard fire put. The next day, one of the women and her two children have gone missing. The game is afoot.

Suspicion immediately falls upon missing mom Kristin’s soon-to-be-ex-husband. Paul married her after her first husband and the father of her twins died. But he never adopted the twins and is suspected of having abused Kristin. When the police release the maybe/maybe not crime scene, Paul moves back into their house.

Happily-married Clara finds herself drawn into the investigation. A former editor, Clara is advising a neighbor’s child who wants to publish a neighborhood newsletter. When the kid wants to publish a conversation she overheard, one that casts further suspicion on Paul, Clara rules against it. The girl publishes it anyway and, all of a sudden, Clara is in the middle of the investigation as well. She and her children are also forced to take a “time out” from the  private school the kids had been attending.

Never-married Izzy, who produces a radio talk show and is a rather new arrival to the hood, finds herself getting involved with Paul. Izzy fled to Yellow Springs after her sister married the man Izzy was secretly in love with.

Police investigating a crime that might not have happened. Gossip steering the investigation and the lives entwined in it. The creepy soon-to-be-ex-husband. All these elements mix with the fascinating women characters and a keen understanding of "neighborhood politics" to deliver a slow but always intriguing story with several endings to satisfy its readers. I enjoyed this book and have already put in a request with my library for Strawser’s first novel. 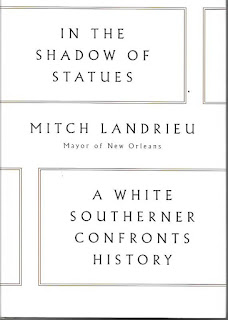 In the Shadow of Statues: A White Southerner Confronts History by Mitch Landrieu [Viking; $25] is a memoir by the New Orleans mayor who removed the Confederate statues from his city. It’s a poignant look at the long-ingrained racism that has been given new life by our racist President and his vile fellows and supporters.

Born in a part of our nation where racism has always been more out in the open, Landrieu writes about history and his relationship to that history. It’s the history that is just now beginning to become better known, a history that reveals that Confederate statues were not erected to honor Confederate leaders, but as a warning to black citizens to mind their places.

These monuments to traitors, no matter how finely made, were never meant to be art. They were meant to terrorize blacks and force them to comply with the wishes of white supremacists. Whites who did not hold with those anti-American views could easily ignore the statues they passed every day. Blacks could not ignore them and should not have had to ignore them.

I knew these stories, including a Republican president’s shocking lack of concern for the people left most vulnerable in the wake of Katrina, before I read Landrieu’s book. Yeah, George Walker Bush may have risen to the rank of just our second worst President ever, but I still consider him to have been an incompetent president and war criminal whose policies hurt and destroyed the lives of American citizens and the innocents caught in the middle of his bloody wars of choice. He gets no pass from me. That said, Landrieu offers us a more honest view of our sometimes shameful history and brings his readers to a moral clarity presented without the loud histrionics of commentators like, well, yours truly.

In the Shadow of Statues is a praiseworthy book and one I recommend strongly. It’s my hope Landrieu will become a much greater force on our national stage. He’s the kind of leader we need.

That’s all for today, my bloggy readers. Remember that I will be a guest at the Cherry Capital Comics Con in northern Michigan Friday through Sunday. I hope to see you there.

Posted by Tony Isabella at 4:16 AM