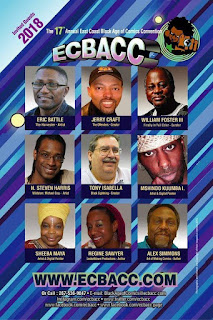 My next convention appearance will be at the East Coast Black Age of Comics Convention (ECBACC). I mentioned this in Monday’s edition of “Black Lightning Beat,” but I have more details for you today.

ECBACC has two components. It kicks off on Friday, May 18, with its opening reception and Glyph Awards presentation at the TECH Freire Charter School, 2221 N. Broad Street in Philadelphia, Pennsylvania. The reception runs 6:30 pm to 9 pm.

The convention itself is a one-day event taking place on Saturday, May 19, from 11 am to 7 pm at TECH Freire Charter School. Besides having a vendors table at the convention, I’ll also be doing other event-related stuff. We’ll get to that in a bit.

To promote positive Black images.
As usual, the ECBACC poster features incredibly talented people. It also looks like a poster for “the Black Brady Bunch and Alice.” I think you can spot Alice. Not on the poster but a welcome addition to any comics gathering is the ever-dauntless Don McGregor, one of the best writers of comics ever and a dear friend of closing in on half a century. When I reported to work at Marvel Comics in 1972, Don was the first person to emerge from the Bullpen to welcome me to the company. He probably doesn’t remember that, but he’s done so many kindnesses for so many people that he couldn’t possibly keep track of them all.

As with the Eisner Awards nominees, I’m not as familiar with this year’s Glyph Awards nominees as I would like to me. With all of the Black Lightning stuff going on, 2017 was a pretty wild year for me. I will be listing the Glyph nominees on my Facebook page and also commenting on the ones I have read, but if you want to peruse the entire list, you can find it on Newsarama.

What will I be doing at ECBACC? I’ll be participating in two of the convention’s many events. Both are on Saturday.

I’ll be one of several judges for the annual AfriCoz contest. This is a black-centric cosplay competition. I served as one of 2017's judges and the costumes were incredible. Joining me this year will be: Roosevelt Pitt (author at Purge Comics), Aaron Beatty (artist at Phenomenon Comics), Naseed Gifted (author of P.B. Soldier) and award-winning fiber artist Beatty Leacraft. The facilitator of the event is Shenkarr Davis.

We’ll be reviewing the contestants from 1:30-2:00 pm and announcing the winners from 3:45-4:15 pm. Since I’ll be concentrating on the judging, I would love for folks to send me their photos so that I can use them in a future bloggy thing.

I’ll also be doing an “ECBACC Talk” with Don McGregor and Professor William Foster III from 4:30-5:30 pm. Don and I will be sharing our thoughts and experiences from our nearly 100 years (combined) in the comics industry. I’m really looking forward to sharing the dais with two of the best men I know.

Because I’m flying into Philadelphia this time around, what I have for sale at my vendors table depends on what I can fit into my one suitcase. At present, I plan to bring two different Black Lightning posters, a Luke Cage mini-poster, some Black Lightning comic books and trades, copies of my July 1963: A Pivotal Month in the Comic-Book Life of Tony Isabella Volume One, and five different reprints of the classic Green Book travel guides, which were used to steer black travelers to friendly hotels and restaurants in the 1940s and 1950s. These are fascinating books and I always order some copies to sell at ECBACC.

Though I charge for my signature at most conventions, ECBACC is one of the few events where I sign for free. Because ECBACC is more than a convention. It’s a community of creators and educators and fans. I am constantly encouraged and humbled by the support I have received from this community. ECBACC’s organizers and volunteers are like family to me. Seeing them every year is always one of the highlights of my year.

Where else will be in 2018? Here’s my current schedule:

If you’re a promoter looking to have me as a guest at one of your shows, e-mail me and I’ll send you my requirements for appearing. I could do one more show in late June, but the window for that is going to close on May 14.

As I said above, I do charge for my signature at most appearances. Here’s how that works:

Items bought at my table: no charge.

Items not bought from me: 1 free signature and all others after the free one are $2 per item.

Photos you take of me or with me: no charge.

Signature witnessed by a representative from a grading company or having me sign a certificate of authenticity: $5 per item.

If I can find time to arrange some photo shoots, I may start to offer professional head and other shots of me. Yeah, just like the guy who played a zombie in the background of a Walking Dead show. But mine will be much cooler.

If you’re a cosplayer portraying a character I created or am known for writing, e-mail me and maybe we can do some business.

Posted by Tony Isabella at 1:03 PM