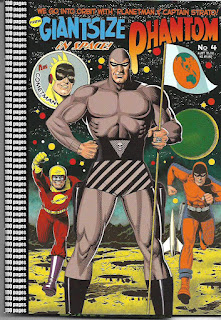 Lee Falk’s the Phantom is one of my favorite comics characters. I first saw him in the Saturday newspaper my father would bring home. Because of his grueling schedule at the family bakery and the time he spent taking care of his wife and children, my father only had time to relax and read a newspaper that one day of the week. Though it was impossible for me to truly follow any Phantom story, I took a liking to the character right away.

Over the years, I have followed the Phantom in his newspaper strip adventures, prose adaptations of those adventures, various cartoon and cinematic treatments of him and every comic book I could lay my hands on. These days, in addition to following the Phantom’s comic strip online and reading the occasional and usually unsatisfying American Phantom comic book, I subscribe to the Phantom comics that are created by Frew Publications in Australia.

This recurring “Phantom Fridays” feature will appear on an ongoing basis in this bloggy thing of mine. It won’t run every Friday, but you’ll probably see it a couple times a month. While it will cover any American Phantom comic books I read, it will mostly discuss the Frew issues and specials.

Giantsize Phantom #4 (approx. $7.50 in U.S. dollars) is a recent addition to the Frew roster. Its 100 pages present a Phantom story  and reprints of other Frew characters, many of them bearing a more than slight resemblance to the Ghost Who Walks. We also get text pages on various aspects of Australian comics history and, usually, a brand-new story of one of the characters.

The fine Glenn Lumsden cover highlights the science fiction nature of this issue’s contents. The lead story is a reprint of Lee Falk’s “How the Phantom Saved the Earth.” It’s a 1993 Sunday story drawn by Sy Barry. That’s followed by stories of Captain Strato by John Dixon from the 1950s; Cometman by Peter Chapman, another tale from the 1950s; and a new Planetman story by Shane Foley, whose work I have enjoyed in Alter Ego and elsewhere. Planetman is another hero from the 1950s. Wrapping up the issue is a text piece on Planetman by Kevin Patrick. The back cover announces another new Planetman adventure by Christopher Sequeira and Massimo Gamberri.

I can’t tell you these non-Phantom reprints are terrific stories. They’re not. They do have a certain charm and a definite historical importance, but they are so-so at best.

Though the art in Foley’s original Planetman story isn’t as good as the Barry and Dixon visuals, I loved this adventure. Especially in how it tied in with the lead Phantom story. Nicely done. 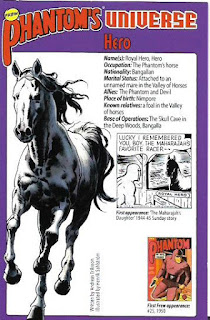 The issue also came with a Phantom’s Universe card featuring Hero, the Phantom’s trusty stallion. The card measures 5.5 by 3.5 inches. 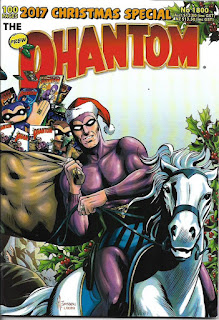 The Phantom #1800 [approx. $9 in U.S. dollars] is the title’s 2017 Christmas Special. The 100-page issue features three stories from  recent newspaper strips. First is “Trouble in the Twelve Nations” by writer Tony DePaul and artist Terry Beatty. This Sunday tale ran from 12/27/2015 to 6/19/16 and had the Phantom foiling a threat to the stability of the kingdom once led by Lothar, great friend to Mandrake the Magician.

“The Wise Guy” ran from 6/26/16 to 4/2/17 and is also by DePaul and Beatty. In this Sunday story, The Ghost Who Walks contends with a family of American mobsters and sets one of them on a better path.

Wrapping up the issue is “The Phantom Stamp,” an odd daily story of an official who wants to issue a Phantom postage stamp. Of course, he thinks the Phantom is merely a legend. The story is written by DePaul and drawn by Mike Manley. It ran from 11/7/16 to 3/11/17. 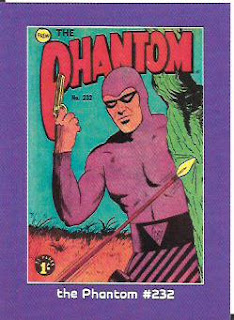 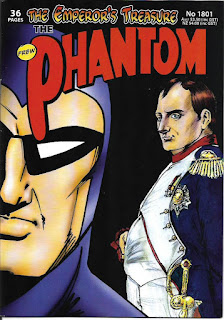 Phantom #1801 [approx. $2.75 in U.S. dollars] is a standard 36-page issue.“The Emperor’s Treasure” was first published by Semic Press, which was, at one time, Sweden's largest comic book publisher. The story is from 1981. This is its first Australian publication.

Written by Ulf Granberg and drawn by Jaime Vallvé, this adventure of the current Phantom sets him on a treasure hunt in Corsica. It starts with “Kit Walker” visiting an old college professor of his. The treasure is also sought by the lovely-but-evil Madame Sauvage and her brutish henchmen. Published in black-and-white, this is an entertaining tale. Not a classic, but still good. 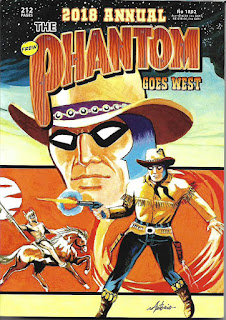 The theme of the annual is “The Phantom Goes West” and every story is set in the American West. Starting from an informative foreword by Phantom expert Andreas Eriksson, the stories concentrate on the series of events that led to the 17th Phantom meeting and courting his American wife Mary Stillwell.

In “Wagon Master” by Ulf Granberg and Janne Lundstrom with art by Ozcan Eralp, the Phantom rescues former slaves from a vicious man attempting to exploit them. It’s from 1975.

A character from the previous story appears in “The Indian Hater” by Lundstrom and Eralp. In this 1975 story, the Phantom deals with the bigotry of the not-long-for-this-world George Armstrong Custer.

In the short “Terror in the Desert,” the Phantom meets Mary. She’s a member of a religious movement that built a town in the middle of the desert to escape persecution. Another Lundstrom/Eralp, the 1974 story predates the two stories that precede it in this annual.

Written and drawn by Eralp, “Badlands” reveals Mary’s town has been destroyed and sets the Phantom on a search for any survivors. From 1976, it’s a grim, but ultimately satisfying story.

“The Freedom Trail” bu Scott Goodall with art by Felmang is one of the best of the “Phantom Out West” stories. Published in 1999, it involves the invention of dynamite and the Phantom’s quest to put an end to a foreign slaver trying to sell freed slaves across the seas. I’d rank it as a classic.

“The Phantom Cowboy” is a 1994 daily story by Lee Falk with art by Sy Barry, George Olesen and Keith Williams. It tells the story of the 16th Phantom meeting and marrying his wife Anne. The tale seems to be at odds with the previous stories of the 17th Phantom, but I can overlook that. The Phantom’s longevity and his being handled by so many different creators around the world makes such blips in the timeline impossible to avoid.

I got a kick out of “The Assassin,” a 1991 story written by Norman Worker with art by George Olesen. It has supernatural elements and involves time travel.

As much as I love the Phantom, I’d have to say the most exciting story in this annual is a brand new story that reboots and revamps the origin of the Phantom Ranger. Written and drawn by Italian creator Romano Felmang with inks by Max Fish, it’s a terrific tale. All future stories of the Phantom Ranger will appear in Giantsize Phantom. 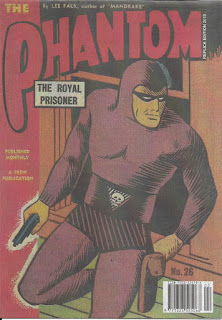 A replica edition of Frew’s The Phantom #26 is packaged with this annual. As you’ll see from the sample page shown below, the comic book reprinted Phantom newspaper strips in a sideways format. The back cover of the replica has a “no longer available” advertisement for an Australian comic book starring Pop-Eye the Sailorman. Such an odd alteration of the character’s name. 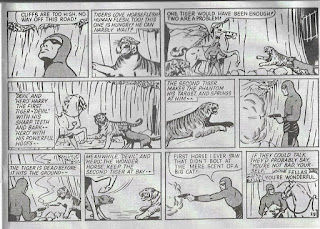 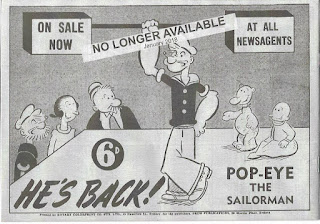 Also packaged with the annual was a cardboard mask of Kid Phantom, one of the creepiest looking characters ever. The Kid stars in his own ongoing title. I read one excruciatingly awful issue and then canceled my subscription. We will speak of this no more. 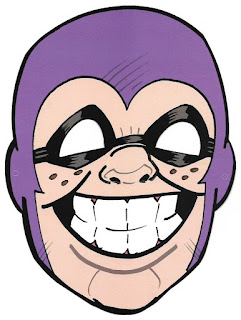 You can buy Frew’s Phantom comic books directly from the publisher. With a little searching, you can also find Australian dealers who will send them to you. I’ll have more information for you the next time I write a “Phantom Fridays” installment.

Thanks for visiting. I’ll be back soon with more stuff.