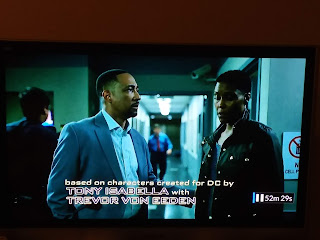 The Black Lightning television series is a weekly delight. I love the series. It has a lot of me in it and a lot of great stuff added by the writers. The actors knock me out every time out. I hope to visit the set this season and personally convey my admiration and thanks to everyone who works on the show.

The Black Lightning love that comes to me from the folks who work on the series, from the fans and from my fellow professionals has been heartwarming. To be part of something so important to so many people would be enough, but I also get to witness that importance at conventions, interviews and TV appearances.

Make no mistake about it. Black Lightning is DC’s most iconic black hero. Fans have hugged me with tears in their eyes because one of my Black Lightning comics was the first time they saw themselves in a comic book. I’ve been known to tear up myself.

Creating Black Lightning carries with it a great responsibility to do right by the character. It’s not an ego thing with me. It’s that sense of responsibility that drives me.

You know I think it’s a mistake and even something of an insult to reduce Black Lightning to yet another Batman sidekick because you liked Batman and the Outsiders in the 1980s. I also liked that book. But it’s 2018 and Black Lightning is a headliner.

Do I have a beef with DC Comics? It’s actually more that I am very disappointed that they are again underestimating both my creation and myself. Though The Other History of the DC Universe #1 has been heavily promoted and got the cover of Previews, DC failed to make mention that there were two other new Black Lightning publications solicited that month...and that’s not counting the now-delayed BATO #2 or the re-solicitation of two previous-published Black Lightning collections.

Black Lightning: Brick City Blues reprints my 1995 Black Lightning title with magnificent art by Eddy Newell. Up until my most recent Black Lightning series, that was the best work I had done with the character. I’m proud of what Eddy and I did there.

Scooby-Doo Team-Up #46 will feature Black Lightning. This wondrous team-up title is my favorite ongoing DC series. Writer Sholly Fisch has a knack for telling hilarious and still respectful stories that work for younger readers and even somewhat older fans like me. I’m looking forward to this issue.

Four Black Lightning publications in a single month. Had DC also re-solicited Black Lightning Volume One and Black Lightning: Cold Dead Hands, they could have promoted eight different comics or trades featuring their most iconic black hero. That would have been quite the worthy event.

Sidebar. There’s a hunger among Black Lightning fans for more Black Lightning merchandise. It’s not as bad as it was for Static Shock, but it’s not anywhere near the amount of product that should be out there for the fans.

Sidebar. I am always on the look out for Black Lightning stuff. I am trying to maintain as complete an archive as possible. When I’m gone, all my Black Lightning materials will be donated to either a museum or a university.

Sidebar. I don’t plan on being gone any time soon.

To their credit, DC Entertainment has honored its various financial commitments to me. I have no complaints on that score. There are a few other areas when they could and should do better, but I’m sure those involve simple human error.

“Black Lightning Beat” will continue as an ongoing feature in this bloggy thing of mine. It will be a while before I resume my blow-by-blow commentary on the TV episodes and a while longer before I launch annotations columns on all of my Black Lightning stories to date. I have to save my energy for my book. But I will be posting new “Beat” columns with as much Black Lightning news as I can come up with. Oh, I have stories to tell, my friends.

Thanks for coming by today. I’ll be back tomorrow with a bunch of holiday gift suggestions.