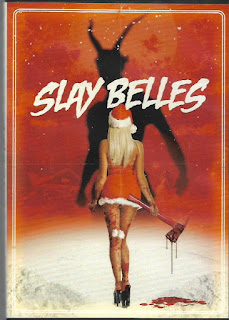 ‘Tis the week before Christmas and all though the bloggy thing, our Tony is doing a frightful yuletide movie binge. From here through December 24, I’ll be writing about a different holiday-themed film every day. It’s my twisted take on the War on Christmas.

Slay Belles, not to be confused with the Ru Paul album of the same name, is a 2018 movie directed by Dan Walker and written by Jessica Luhrssen and Walker. It stars Barry Bostwick as Santa with Kristina Klebe, Susan Slaughter and Hannah Wagner as urban explorers Alexi, Dahlia and Sadie. Here’s the Internet Movie Database summary:

It's Christmas Eve and three cosplaying women come across the malevolent Christmas demon Krampus. The girls must team up with Santa Claus himself to battle the creature and save the world.

“Cosplaying” is a stretch. For the holiday-themed episode of their YouTube show The Adventure Girls, the ladies go to the abandoned Santa Land amusement park wearing sexy Christmas outfits. For those of you who care about such things, there is one lightning-quick boob shot. I mention this only so you don’t spend the entire 77 minutes this movie runs looking for more.

On their way, the girls stop at a bar owned by the prickly Cherry [Diane Salinger]. They also learn from a local park ranger that a number of children have gone missing and some mutilated bodies have been found. The operating theory is a hungry bear.

The girls break into Santa Land, which is played by the remains of the for real Santa’s Village in southern California. Before long, they run into Krampus as the demon places bloody body bits into a Christmas present box. He sees them and chases them into a cabin. Inside the cabin: Santa!

Bostwick clearly has a great time playing Kris Kringle. After his magic convinces the girls that he’s the real deal, he explains that Krampus is the demon of Christmas evil and hints at some mystical connection between himself and the monster. This is where I nailed the ending of the movie. But I digress.

Santa and the girls capture Krampus by shooting him with some sort of tranquilizer gun. When Krampus goes unconscious, Santa passes out as well. One and one equals...well, let’s just say the ladies aren’t good at math.

Krampus escapes. Santa and the Adventure Girls run for their lives. Krampus kills some people, including Sadie’s estranged boyfriend. He responds to her phone call just to die. Ranger Sean [Stephen Ford] shows up and the girls shoot him with the tranquilizer gun. More fleeing and a little more killing ensues. Oh, yeah, and those bloody bits Krampus put into the Christmas present box have turned into hairy balls with teeth. They try to chomp the girls, but get shot into dead hairy balls pretty quickly.

I’m cutting to the chase. Bar owner Cherry is revealed to be Kris’ ex-wife. Cherry’s new main squeeze is Krampus. When Krampus is shot  and Santa suffers the same injury, the girls finally suss out how strong the connection is. However, by that time, Cherry and Krampus have taken off in Santa’s sleigh to spread their murderous mayhem all over the world. The girls save the world by decapitating Santa with an axe. Santa dies. Krampus dies. The sleigh explodes, which probably means Cherry dies as well.

Slay Belles isn’t a very good movie, but it’s good and funny enough for one viewing. Bostwick and Salinger clearly have fun playing their characters. Klebe, Slaughter and Wagner have a likeable chemistry. The Krampus suit is decent.

On the minus side...

The acting and the writing could and should have been better. The basic idea was good.

The night scenes were shot way too dark. That seems to be a common problem with movies like this. Sometimes it’s because the effects don’t look good, sometimes it’s just bad camera work. I’m guessing it’s a combination of both those things in this movie.

Richard Moll is wasted as a ranger in this movie. His character is  totally unnecessary to the movie. He doesn’t get any good dialogue or action scenes. As a fan of this actor’s work, I felt cheated by how poorly he was used.

Rotten Tomatoes says 92% of the audience liked this movie, which is probably fair given that it is a fun little holiday horror romp. Its average rating was 4.8/5.

The DVD cover art is shown at the top of today’s bloggy. The actual movie poster is way more fun: 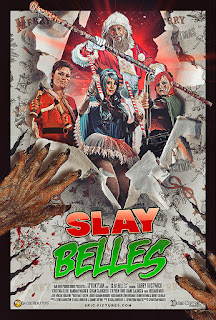 Without even breaking a sweat, I found seven more Christmas horror movies in my vast accumulation of movies I own and haven’t watched yet. I’ll be watching one of those for tomorrow’s bloggy thing. It doesn’t matter if you’re naughty or nice, you’re getting my reviews of these movies right up to Christmas Eve.

Posted by Tony Isabella at 7:04 AM