MORE MAGAZINES FOR THE HOLIDAYS 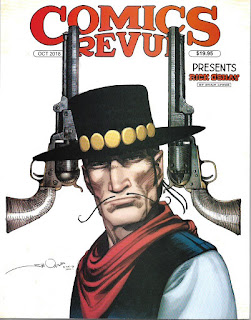 Magazine subscriptions make great holiday gifts. They remind loved ones of your love for them all year long. The other day, I wrote about some magazines I thought would make wonderful presents for people in your life. Today, I’m writing about some other magazines I also think would serve that role just as admirably.

Edited by Eric Norwood, Comics Revue [Manuscript Press; $19.95 per double-numbered issue] is another of my mostest favorite magazines. Yeah, I know “mostest” isn’t really a word, but it aptly describes a journal that delivers 128 pages of classic comic strips in each and every issue.

Let’s look at issue #389-390 [October 2018] as an example. On the cover, we get a way cool shot of gunslinger Hipshot Percussion from “Rick O’Shay” by Stan Lynde. Set in the Old West, the strip presented adventure, humor, social commentary or a combination of the three. This issue reprinted a story from 1976.

The issue also featured complete stories of Mandrake the Magician from 1937, the comical Sir Bagby from 1962, the Phantom from 1959 and Casey Ruggles from 1952: Serials included two different takes on Flash Gordon, Alley Oop, Buz Sawyer, Tarzan, Gasoline Alley, Steve Canyon, Krazy Kat, Steve Roper and Garth.  When a new issue arrives at Casa Isabella, I try to prolong my enjoyment by reading just one story a day. “Try” is the operative word there.

A one-year, six-issue subscription is a bargain $59. For ordering information, go to:
www.comicsrevue.com 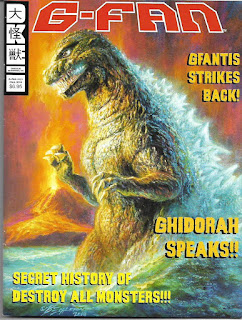 As the pastor of the First Church of Godzilla, the closest thing I have to holy scriptures is the quarterly G-Fan magazine edited and published by J.D. Lees. It can be a flawed scripture. There’s been a little too much right-wing jingoism in the mag’s “Gfantis” comic strip and then some fairly absurd defense of same, but just about everything else in the issues is wonderful.

G-Fan #121 [Fall 2018; $6.95] had articles on the secret history of Destroy All Monsters, one of the actors playing a Ghidorah head in the next Godzilla movie from Legendary, G-Fest XXV, King Kong, The Meg, alterations of Godzilla movies for release in the United States and more. The highlight of the issue was a replica of the original pressbook for Destroy All Monsters.

Four issues of G-Fest will cost $25 in the US and $26 in Canada, where the magazine is based. Both subscriptions are postage paid. The only drawback to the magazine is that it makes me want to run out and buy all the amazing things it shows and, since some of the stuff is only available in Japan, I’d be chalking up more frequent flier miles than I can afford. 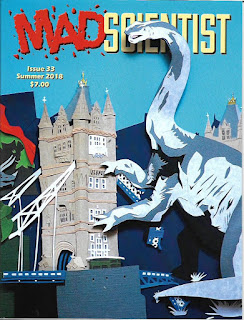 My friend Martin Arlt’s Mad Scientist [$7 per issue) comes out on an irregular basis, but the arrival of each new issue delights me. Issue #33 [Summer 2018] has an amazing paper cutout cover inspired by The Lost World [1925] by John Rozum, who you might know better as a top-notch writer of comic books. It illustrates Arlt’s 17-page article on that classic movie.

Other articles and features cover Viewmaster dinosaurs, the sequels that time forgot, the rhedosaurus (The Beast from 20,000 Fathoms), famous and obscure paleo-monsters and Hal Hardy in the Lost Land of Giants, a Big Little Book.

Subscriptions to Mad Scientist are not offered, but you can go the magazine’s website
http://madscientistzine.com/
to order this current issue and back issues. Order a stack of back issues for the monster-loving friends on your gift list. They’ll love them! 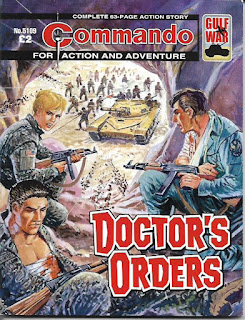 We have to go across the pond for the next two magazine on Tony’s recommended gift list.  Published by D. C. Thomson & Co. Ltd., the black-and-white digest-size comics magazine Commando releases four issues every two weeks. The four-pack is equally split between new and reprint stories.

I compare Commando to the non-series back-up stories that would run behind Sgt. Rock and the Haunted Tank in DC’s great war comics of the 1960s. Each 63-page tale is complete unto itself and suitable for all ages. The reprints are generally set during World War I and II, but some issues range much further. Indeed, a science-fiction adventure or two has worked its way into the mix.

I’m months behind on my reading of Commando, but that’s a factor of how often issues are released and not any lack of fondness for the series. Some of the recent issues I’ve read have featured courageous women fighting for their country, soccer rivals and soldiers striving to achieve redemption for past mistakes or outright sins.

Commando doesn’t come cheap for those of us in the United States. My recurring one-year subscription runs me just south of $200 per year. You either have to be lousy rich, which I am not, or really love someone to give them a Commando subscription. 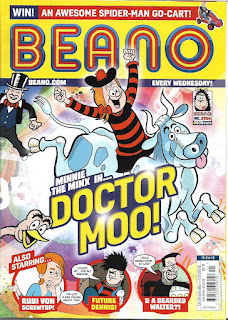 The other D. C. Thomson publication I recommend and subscribe to is Beano, Britain’s longest-running children’s comics weekly. Quirky kids, who could only be considered as truly bad in a world that was much nicer than ours, are Beano’s reigning stars: Dennis the Menace (who made his debut the same time as the American Dennis the Menace, but not related to the Mitchell kid), Minnie the Minx, Roger the Dodger, Billy Whizz (the world’s fastest boy), Calamity James, Bananaman and more. The humor won’t appeal to all readers, but I’m still enjoying the magazine enough to sign up for a recurring subscription at around $125 a year.

For subscription information, I suggest you go directly to the D.C. Thomson website:
https://www.dcthomsonshop.co.uk/ 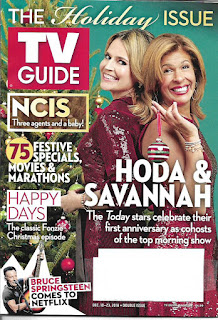 TV Guide is my final magazine gift recommendation for this holiday season. I have a nostalgic love for this magazine. When I was just a wee lad and the magazine was digest-size, I used to love reading every new issue and deciding which programs I would watch. Yes, we only had three channels back then, but it was still magic.

The current TV Guide is magazine-size and carries information and schedules on a great many more channels, but, every day, I check out what’s on that day and decide which shows I’m going to record. I wish that I had that “record” option when I was a kid. Even with just three channels, there were hard decisions to be made.

If you tell me TV Guide isn’t as fun as it once was, I won’t argue with you. But it’s still fun and it’s still useful. I’ll subscribe as long as I own a TV set.

TV Guide is one of those ridiculously cheap subscriptions. A year subscription (52 weeks, though some weeks are doubled up) costs $20 and, currently, you get a free wine tote with your order. Pay via credit card and you’ll get an extra eight free issues. You can buy a subscription at:
https://www.tvguide.com/

Posted by Tony Isabella at 6:48 AM