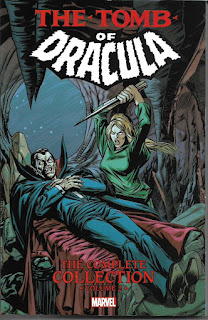 Two of my Dracula stories from the Dracula Lives! black-and-white magazine of the 1970s are included in Tomb of Dracula: The Complete Collection Volume 2 [$39.99].

From the back cover:

Open the tomb once again for tales filled with bloodsuckers, cultists and things risen from the grave! When Dracula attempts to feed on Jack Russell's friend Topaz, its time for a vampire versus Werewolf-by-Night showdown -with the Darkhold as the prize! Blade the vampire hunter closes in, but will the Lord of Darkness be burned by Doctor Sun? It's stakes on a plane when Drac's fl ight is hijacked -and the Montesi Formula might spell doom for all vampires! Discover the beginnings of Dracula's feud with the wizard Cagliostro, and meet Lilith - his devastating daughter! Plus: Spider-Man! Hannibal King! And tales from Dracula's centuries-long life, including a clash with Frankenstein's monster!

My first of my two stories is "Night Flight to Terror!" from an idea by Marv Wolfman and with art by Gene Colan and Pablo Marcos.

The second is "Shadow over Versailles" with art by John Buscema and Pablo Marcos.

I'd rank these stories among the best of my 1970s work.