‘TWAS THE BLOGGY THING AFTER CHRISTMAS 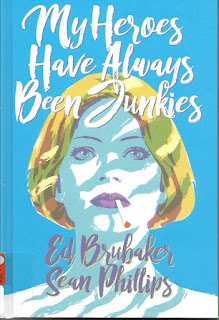 Christmas 2018 is a few days in the past as you read today’s bloggy thing. I did not dress up as Santa  with an axe this year because I had declared a "War on Christmas" truce. Which doesn’t mean an occasional review of a ho-ho-horror movie won’t find its way into the bloggy thing between now and Christmas 2019.

Christmas 2018 was filled with much joy and a few annoying moments. Those annoying moments came from stupid people saying stupid things. The stupid pisses me off, but only briefly once I remind myself how utterly inconsequential such people are to my life and the lives of  those I love. Onward to the fading days of this year and the bright hope of the year to come

What you’re getting in this bloggy things are reviews of comics I  read through my local Medina library system. Borrowing comics from a library is an inexpensive way to read graphic novels, manga and  books you might not otherwise sample. If you’re me, you like some of those books so much that you buy them for your own home comics library. Support your local library.

My Heroes Have Always Been Junkies by Ed Brubaker and Sean Phillips [Image Comics; $16.99] is the first original graphic novel by the stellar team that brought us Criminal, Kill or Be Killed, The Fade Out and more. Its tight 72 pages tells the tale of a teenage girl with a fascination for artistic drug addicts and how her dangerous ways impact an upscale rehab clinic. Like most of the protagonists of the impressive Brubaker and Phillips oeuvre, Ellie’s character and her world are shades of grey where life-changing surprises can and do await just around the corner.

With every new Brubaker/Phillips projects I become more of a fan of their work. Mostly I have read them through individual issues or in books borrowed from the library. Come 2019, I plan on adding them to my own library, preferably in hardcovers. Any chance of seeing a Criminal Omnibus in the near future? 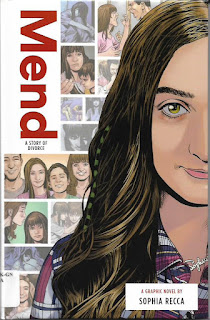 Mend: A Story of Divorce by Sophia Recca with art by Nam Kim and Gerry Leach [Zuiker Press; $12.99] kicks off a series of graphic novels written by young adults for young adults. Zuiker Press is an “issue-based literary house” whose authors tell their personal stories in advancement of various causes. In Mend, Recca tells the tale of her parents’ divorce, her blaming herself for that divorce and her mission to make sure both of them remain in her life. It’s a gutsy thing for a 14-year-old to write about her life in such a revealing manner. But...

Mend comes off like a television “afternoon special.” In a sense, it’s a real-life “Mary Sue story” whose young protagonist is almost too good to be real. As I've said many times, we are all the heroes of our own stories.  I have a lot of respect for Recca, but the emotional content in this book needed to be stronger.

I do applaud the founders of Zuiker Press for launching this company. Michelle Zuiker is a retired educator. Her husband Anthony Zuiker is the creator and executive producer of the CSI franchise. Their work here is admirable, as is that of the various other educators and lawyers involved in the graphic novels.

Perhaps I expected too much from Mend. I confess I was so excited by the news of what Zuiker Press was doing that my disappointment may have been colored by that excitement. I suggest my readers take a look at Mend and other graphic novels in the series to make their own determinations. Also available at this time is Click: A Story of Cyberbullying. Coming this spring will be Imperfect: A Story of Body Image and Colorblind: A Story of Racism.
ISBN 978-1-947378-00-1 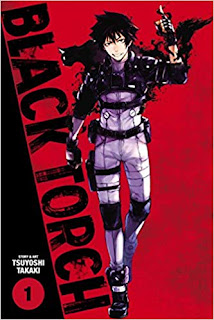 Over half of the manga I read comes from the library. Since manga series often run over a dozen volumes, it’s an economical way for me to sample these series. Recently, I read the first two volumes of Tsuyoshi Takaki’s Black Torch [Viz; $9.99 each].

Jiro Azuma is descended from ninja and can talk to animals. When he rescues what appears to be a black cat, he discovers it is actually a supernatural creature named Rago. During an attack by other such creatures, Jiro is injured. To save him, Rago bonds with him. The two are now forever linked.

Jiro and Rago find themselves in the middle of a war between demons and ninjas. The demons hate them, considering Rago to be a traitor. The ninjas don’t fully trust Rago. Even so, Jiro and Rago are made part of the special Black Torch squad of ninjas fighting mystical monsters.

Black Torch is not unlike a modern Western-style super-hero team. There are conflicts between team members. Some of the young heroes are hiding secrets. The Black Torch trainees are looked down upon by the more experienced squads and must prove themselves.

While I wouldn’t rank Black Torch as a great manga series, I have enjoyed these two volumes. I’ll continue to follow it. 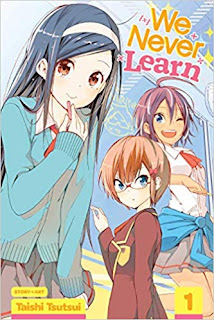 Taishi Tsutsui’s We Never Learn Volume 1 [Viz Media; $9.99] kicks off a shonen manga series about an brilliant but poor high school student who can earn a scholarship if he helps three geniuses get into their universities of choice. The catch is that these beautiful young ladies want to pursue subjects other than those in which they are already proficient.

Yuiga must keep up with his own studies while tutoring the girls. The girls must find ways to work with him and each other to achieve their goals. The girls must also deal with the growing feelings for Yuiga, even as their tutor is puzzled by the unfamiliar territory of having a close relationship with his students. Because all these kids are supporting one another in their individual goals.

This is a gentle comedy drama. These are likeable kids. There are humorous moments, but they are the natural stuff of the day-to-day efforts and relationships. I found the first volume pleasant and am eager to see how the series progresses.

Posted by Tony Isabella at 6:40 AM