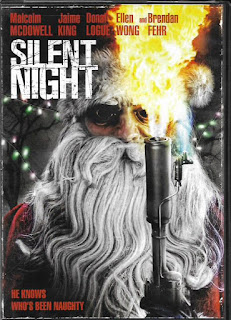 This is the final entry in my 2018 War on Christmas holiday horror film marathon. Silent Night (2012) is a kind of sort of reboot of the classic Silent Night, Deadly Night (1984), which I wrote about in 2016. I’ll be providing links to that review and my reviews of the original movie’s four sequels later in today’s bloggy thing.

Directed by Steven C. Miller with a screenplay by Jayson Rothwell, the movie stars Malcolm McDowell going big as a small-city sheriff determined to catch the city’s Santa Claus cosplayer serial killer without bringing in state or federal law enforcement. He claims he doesn’t want to ruin the town’s annual Christmas Eve Santa Claus Parade, but it’s clear early on that he wants more to his cop life than writing parking tickets.

Jaime King plays Aubrey Bradimore, a new-to-the-force deputy still dealing with the unexpected death of her husband. Her father [John B. Lowe] is a retired police officer and one of the Santa Clauses competing in the parade. Aubrey has doubts about her ability to do the job, but her father is encouraging.

The movie is rated “R” for bloody violence, some sexuality/nudity, language and brief drug use. There is a lot of gore in this movie. I’ll give you some specifics in a bit.

Our murderous Santa’s first two victims are a police officer who’s cheating with a married woman. The cop is wrapped in Christmas tree lights and electrocuted. The woman is dismembered, though we don’t see that on screen.

Because of the thought-to-be-missing-but-actually-well-done cop, Aubrey has to come into work on Christmas Eve. Before she leaves her parents’ house, the camera lingers on a mysterious small wrapped gift that is mysterious because the camera lingers on it. Several other gift boxes of the same size and type will also be seen throughout this movie. We don’t discover what’s in them until nearer the end of the carnage. Spoiler: lumps of coal.

To the movie’s credit, we get some great red herrings. Donal Logue plays a traveling Santa, the worse non-serial killer Santa you can imagine. Mike O’Brian plays drug dealer and Santa cosplayer Stein Karsson. Curtis Moore plays a pervert preacher who tries to put the moves on the grieving Aubrey and takes photographs of the cleavage of the mayor’s daughter and other well-endowed Christmas carolers.

Aubrey is the most competent of the cops, but she’s slow to put it all together. From the drug dealer, she learns of an past incident years ago in another town. The husband of a woman cheating on him donned a Santa outfit and a flame thrower to get revenge on her and her lover. Aubrey’s investigation reveals other Christmas killings and that Logue’s traveling Santa was in the same town as at least one of them.

One by one, the suspects are eliminated. Aubrey shoots the dealer when he pulls a gun on her. When she spots his mysterious gift, she figures out the killer Santa is targeting his victims. She calls it in, but stops to check on her dad first. Sadly, the serial killer got there first. Which confuses Aubrey since he knows her dad was a good cop and man.

The killer gets to the police station well before Aubrey. By now, it seems Santa is going after more people than just those who could reasonably be considered naughty. He doesn’t like police officers or even clerical police workers either.

The climax is flamboyant, as in actual flames. Aubrey gets knocked around by Santa, but, when things looks bleak, she gets hold of his flamethrower and cooks him. She manages to rescue a clerical worker as the station burns down around them. We get a shot of the killer’s Santa hat, mask and beard. He has managed to escape.

The now badly-scarred killer leaves the town in his truck. We get a flashback explaining why he targeted Aubrey’s dad and other cops. The killer was the son of the earlier killer with the flamethrower and has been hiding in a truck when his father was killed. Aubrey’s dad was the officer who stopped that first killer by firing at him and igniting the flamethrower’s tanks. This is pretty much the origin of Batman. Just kidding.

The survival of both Aubrey and the killer seemed to set the stage for a sequel. Which doesn’t seem to be coming any time soon if at all. Probably for the best.

One more thing. Beyond the now-cliched Santa with an axe slaughter, two scenes mimic scenes in the original Silent Night, Deadly Night. In the original, the young man who will grow up to be the killer is visiting his non-responsive grandfather in a nursing home. Gramps suddenly and scarily wakes up to tell his grandson how Santa will kill any child who has been naughty even once. He tells the young lad to run before he lapses back into immobility and silence. That scene is repeated in this movie, albeit with the boyfriend of the mayor’s daughter. As in the original, the boyfriend is the only one present when Gramps gets all talky.

Later in the film, the mayor’s daughter gets impaled on the antlers  of a mounted deer. The same thing happened in the original movie, but with the much more attractive Linnea Quigley.

Before we get to my final thoughts on Silent Night, here are links to my reviews on the original movie and its sequels.

I enjoyed Silent Night. McDowell was fun to watch. King, Logue and  O’Brian gave excellent performances. The red herrings were something we don’t see often or as well done in other slasher movies. I did think the gore was over the top, but understand that’s actually an attraction for some viewers. If there’s a sequel, I’d likely watch it. But I don’t need to see this movie again.

Silent Night was made on a budget of five million dollars. I don’t think it turned a profit. Rotten Tomatoes’ “Tomatometer” rates it at 64% with an audience score of 33%. The Internet Movie Database users have it at 5.2 stars.

I’d planned to do two more ho-ho-horror movie review, but I ran out of Christmas cheer after seeing blackface in one of the films and watching a trailer for the other that did nothing for me. Comet TV recently showed To All a Goodnight (1980) and I recorded the film. I’ll probably watch and write about it in the near future as part of a bloggy thing on that network’s movies.

I’m already planning next year’s War on Christmas movie marathon. How many different Krampus films have been made? I suspect I’ll be finding out in the New Year.

Thanks for joining me for this holiday madness. I’ll be back soon with more stuff.