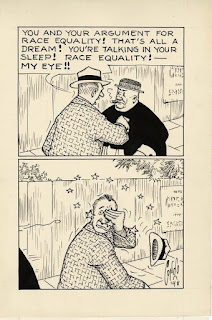 Today we celebrate the debut of The Outbursts of Everett True, the two-panel newspaper feature created by A.D. Condo and J. W. Raper. Originally titled A Chapter from the Career of Everett True, this strip ran from July 22, 1905 to January 13, 1927. Condo abandoned it for health reasons.

Everett True is 115 years old today and, amazingly, wonderfully, he is finding a new audience. Strips like the one that leads today’s bloggy thing resonate in today’s troubled world. In a world where we have far too many brutal police officers wearing military gear and attacking citizens exercising their right to protest that very brutality, in a often unrecognizable United States where an insane  president’s unidentified storm troopers grab people off our streets and throw them into unmarked vans and whisk them away to who knows where, there is something oddly comforting about one ill-tempered portly man who dispenses rough justice with two ham-like fists and a decidedly solid moral code and umbrella. 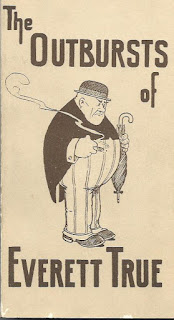 I met Everett True in 1983. I can’t remember whether I discovered him on my own and through the recommendation of my dear friends Don and Maggie Thompson, but my introduction to said volatile crusader came in the form of The Outbursts of Everett True, a collection of his decades-old strips from Vestal Press. To quote that volume’s back cover copy:

Everett True is a portly man with a big temper and a short fuse, who takes a dim view of the various transgressions that are inflicted on him from time to time by various members of the human race.

Is there one of us who wouldn’t like to give a poke on the hose to the fellow who cuts in front of us in the waiting line, administer a sound thrashing to the chap who abuses an animal, throw onto the street a rude bus driver or give a verbal lashing to the chronic borrower? Of course, we’d all like, mentally at least, on occasion, to do all of these things.

The rules of social decorum (to say nothing of the simple laws on assault and battery) prevent most of us from behaving the way Everett True does. But when he wreaks havoc on his fellow man, he’s really acting as our surrogate and we can take out our own frustrations by laughing at his antics!

I was so taken with this turn-of-the-century force of nature that I wrote hundreds of modern-day, comic-centric Everett True cartoons for Comics Buyer’s Guide and the same publisher’s Movie Collectors World. When I pulled the feature from CBG over creative/ethical issues, I wrote a dozen or more strips for Amazing Heroes and The Comics Journal. These strips were mostly drawn or at least inked by the great Gary Dumm.

Gary and I revealed Everett True was a comics fan. This made creators, editors, fans and publishers the natural targets for his outbursts. Sometimes Everett delivered a righteous pummeling while other times he poked gentle fun at comics. Only occasionally did he comment on “real world” events. 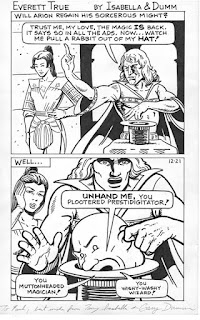 This gag involving the DC Comics character Arion Lord of Atlantis falls into the “gentle fun” category. Arion was created by my dear friend Paul Kupperberg and artist Jan Duursema. As you can see, we gave Paul the original to this cartoon.

Mrs. True figured prominently in both the original version and my version of Everett True. Along the way, Gary and I added Everett’s young son and his fetching adult daughter. For the most part, even comics industry targets who were treated harshly enjoyed the strip. However, one comics creator took such offense to a strip involving his creation that he struck me in my forehead. I wasn’t hurt, just stunned by this reaction. Comedy is dangerous.

Confession time. This is not the Everett True tribute I originally planned for today. I was going to share several Everett True gags from Comics Buyer’s Guide with you. I was unable to find those file folders in the chaos that is my Vast Accumulation of Stuff. Truly I’m deserving of an Everett True beatdown during which he’d surely call me a “dithering dilettante” or an “unorganized orangutan.” I’d accept his righteous ire and strive to do better in the future. As to what that future might entail, we’ll swing around back to that by the end of today’s bloggy thing. 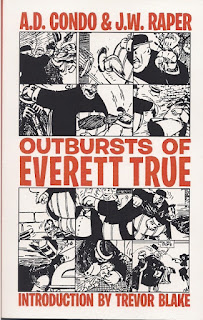 There was a second collection of Everett True strips published by Underworld Amusements in 2015. Their Outbursts of Everett True is nearly 300 pages. The 1983 book was just under a hundred pages, so this one gives you more beatings for your bucks. Best of all, it’s available from Amazon.

Recently, Everett True has been discovered by a new generation of fans. Even before television writer Tim Neenan (Childrens Hospital, NTSF:SD:SUV) posted a tweet of the classic comic strip, folks were flocking to the Barnacle Press website and enjoying a frighteningly large selection of the old cartoons. 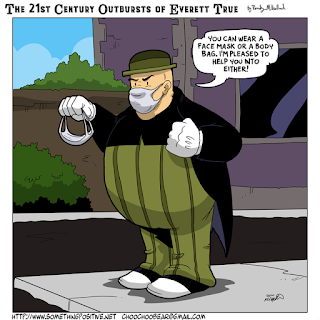 Unaware of my work with Everett True, cartoonist Randy Milholland drew a one-shot “The 21st Century Outbursts of Everett True.” Since the character is in the public domain, that was fine with me...and I enjoyed what Milholland did with my old friend. Milholland has also done a bunch of “Popeye’s Cartoon Club” strips at Comics Kingdom. Those are definitely worth checking out.

Moving on to my future plans for Everett True.

Many readers have said they would love to see all my Everett True strips collected in however many volumes it takes. The format I’m considering is to reprint each strip with new prose material that puts these decades-old strips in context. Somewhere down the line, when I’ve finished my current projects, I will launch some sort of crowd-sourcing campaign to raise the necessary funds to make these books possible.

Within my Vast Accumulation of Stuff, I have all the Comics Buyer’s Guide issues featuring my Everett True cartoons. I’m not sure if I have the Movie Collectors World issues, so I’ll have to track those down. I’m fairly certain I don’t have the issues of Amazing Heroes and Comics Journal that ran Everett True because, when I sold those in my garage sales, I never thought to go through them and pull out those issues. When the time comes, I’ll call on my fans and friends to help me locate those strips.

Readers have suggested I write new Everett True strips and run them online, adding that I shouldn’t confine these new strips to comics and pop culture. I’m intrigued by this idea and am considering it. Interested artists should contact me.

NOTE: Unless I find a sponsor, this would not be a paying gig. Back in the day, I used to get $25 per Everett True cartoon. I then paid Gary Dumm and the other artists $20 per cartoon. If I can come up with ways of monetizing these new strips, the lion’s share of any money would go to the artists.

I have also toyed with the idea of writing an actual Everett True comic book. This would feature full stories of different lengths. I’d probably draw inspiration from comic books like The Adventures of Jerry Lewis, Herbie, the works of Carl Banks and John Stanley, old-school Archie titles, Inferior Five, Angel and the Ape and fun  Marvel titles like Kathy, Millie the Model and Patsy Walker. I’ve not done a lot of thinking about this beyond that it would be cool to tell full stories with Everett and his family.

One more thing for today. While searching for my Everett True file folders, I came across a handwritten pitch for a comic-book series that would have reprinted the cartoons I did with Gary Dumm and the other artists. This pitch was written in February 1991. For reasons unknown, I never went any further with the pitch.

Everett True is a turn-of-the-century comic strip character created by A.D. Condo and J. W. Raper in 1905. Everett has a big temper, a short fuse and his own methods of dealing with the transgressions inflicted on him by an unthinking mankind. His original strip ran to 1927. The character is in the public domain.

In 1983, writer Tony Isabella, working with an artists including Gary Dumm and Greg Budgett, revived the character in the pages of the weekly Comics Buyer’s Guide. The feature immediately became one of the tabloid’s most popular features and also appeared in Movie Collector’s World from the same publisher.

Everett now concentrated his scorn on hypocrisy and fatuousness in the comic book field with side swipes at the film and television industries. After CBG chose not to run a cartoon critical of the paper’s publisher, Isabella moved Everett to Amazing Heroes and the Comics Journal for a brief time.

This new series would reprint the nearly 200 Everett True cartoons published from 1983 to 1989 in chronological order with additional witty comments on the cartoons and the events which inspired them. It would be a complete history of the period in comics history with enough special features to entice even those fans who faithfully saved each and every cartoon. These features would include:
New color covers by Gary Dumm.
Brand-new Everett True cartoons.
Reprints of other humorous articles by Tony Isabella with lots of new art by Dumm and others.
The “new” Everett True cartoons from Movie Collectors World, Comics Journal and Amazing Heroes.
Classic Everett True cartoons by Condo and Raper.

Each issue of Everett True would include as much new material as possible as to increase fan interest in the series.

TONY ISABELLA is a popular writer whose credits include everything from Avengers and Dracula Lives to Star Trek, Tarzan, Welcome Back Kotter and Young Love. He is probably best known for creating  Black Lightning, DC Comics’ most iconic black hero. His full resume is included.

GARY DUMM has drawn for such diverse comic books as Harvey Pekar’s American Splendor and Malibu’s Plan Nine from Outer Space. He also brings a wide range of production skills to Everett True.

Looking back at this pitch, I was certainly setting Gary and myself up for a whole lot of work. If I were doing this comic book today, I don’t think I would do everything listed above unless the artists and I got advance or on completion payments from a publisher.

It delights me no end that Everett True is finding new fans in our troubled times. He’s a great character and he’ll certainly have his work cut out for him if other creators continue his proud legacy.

Happy birthday, Everett, and many more years to come!