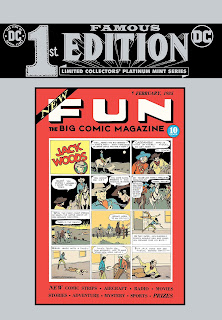 The history of DC Comics begins with New Fun #1 [February 1935]. Cover touted as “The Big Comic Magazine,” the 10" by 15" launch issue was 36 pages (including covers) and was published by National Allied Publications, Inc. The president of the company was former career soldier and pulp magazine writer Malcolm Wheeler-Nicholson and the editor was Lloyd Jacquet. The official name of the company changed to National Periodical Publications, but DC Comics was the name most knew it by and that name would become official in the 1970s.

Earlier this year, DC Comics reprinted the issue (with additional historical material) as Famous First Edition: New Fun #1 C-63. The very reasonable price for the handsome hardcover volume was $19.99. Worth every penny and more.

Fascinated by this “artifact,” I’ll be taking my time writing about it. If this means my comments will exceed this single bloggy, then so be it. Let’s start with the credits/indicia page.

Two of the names in the credits as no longer with DC Comics. Gone are Pat McCallum (Executive Editor) and Dan Didio (Publisher). The latter is still writing a 12-issue Metal Men series, but he may be done with that at this writing. Given the purchase of Warner Bros by AT&T and the comics industry slowdown that came with the Covid-19 pandemic, other names in the credits may not be there for long. Despite my own unhappy experiences with DC Comics since the 1970s, I hate to see almost anyone in comics lose their jobs. Predators and the employees and management who enabled them are not included in that.

Reading the small print, I came across this line:

DC Comics does not read or accept unsolicited submissions of ideas, stories or artwork.

This is why you’re unlikely to see new Tony Isabella stories from DC in the foreseeable future. It’s been two years since I was asked to pitch anything to DC and, even though these were things they’d asked for, there was never any serious interest in publishing more Black Lightning or anything else by me.

Getting back to this special hardcover edition...

An introduction by the late Jerry Bails precedes the actual comics reprint. Many consider Bails to be the “father of comics fandom” and I don’t quibble with that. His “The Start of Something Big” was written in 2000 for an earlier planned reprint of New Fun #1, but legal concerns torpedoed the project. It took two decades for DC’s lawyers to suss out that the company did have the right to reprint Oswald the Rabbit comics from the original publication.

A second introduction was written by Roy Thomas, legendary editor and writer. The high point of this intro is that it made me realize something I knew but didn’t impress itself on me until I read this piece. Editor Lloyd Jacquet was not only the editor of this first DC Comics release, but less than five years later, was the editor of Marvel Comics #1, the first Marvel Comics release.

Jacquet turns up in many comics history articles, most recently one which discussed his connection to a fly-by-night comics publishers of the mid-1940s. He might not be well-known, but, given he was all over the comics industry at its start, I’d buy a biography of him in a heartbeat.

The cover feature of New Fun #1 is “Jack Woods” by Malcolm Wheeler-Nicholson and artist Lyman Anderson. Twelve panels including a logo panel. Woods seems to be a wandering cowboy of the type common to comic books over the years. When he sees suspicious cattle driving, he ends up the prisoner of Don Nogales. He breaks free, but Miguel, assistant to Nogales, is about to throw a knife at him in the final panel of the strip. You can add your own “knife to a gunfight” quip if you so desire.

The inside front cover presents a stirring proclamation from “Fun the Fantastic,” the dwarf-like spokesperson of the comic magazine. He describes the variety that awaits readers, drafts those readers to be assistant editors and asks them to fill out a cut-out coupon listing their favorite features. A hundred readers will get tickets to their local movie theaters. If a reader writes a letter and it’s judged to be one of the ten best, they’ll get an original drawing from their favorite feature. I thought this was a terrific way to connect with the readers. 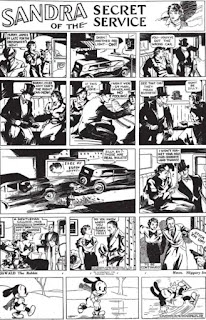 “Sandra of the Secret Service” is by Wheeler-Nicholson with Charles Flanders. Sandra seems to be quite well-off. She has a chauffeur named William and a butler named Haskins who, I suppose, could be fellow agents. Or maybe she hasn’t joined the Service yet. Perhaps she’s about to be recruited by the man who jumped into her car when  being pursued by people not hesitant to open fire on Sandra’s car. Flanders is best known for drawing the Secret Agent X-9 and Lone Ranger newspaper strips.

Sandra is not quite a full page. The GCD describes it as .84 of a page with the remaining .16 occupied by Oswald the Rabbit. Though this feature looks like a newspaper strip, it’s an original feature probably written by New Fun cartoon editor Sheldon Stark and drawn by John Lindermayer. Golden Age comic-book artist Lindermayer most likely drew several other New Fun features under various aliases. Stark is such a fascinating fellow that I feel compelled to borrow my friend Nicky Wheeler-Nicholson’s brief biography of him in this special recreation of New Fun #1:

Sheldon H. Stark, (1909-1997) cartoon editor for New Fun #1-2. Stark has been credited by some with the script for the “Oswald the Rabbit” strips and may have contributed to some other unattributed scripts. He was born in Brooklyn, New York to Russian emigrants. As classmates at both the Lincoln School and later Dartmouth, Stark became a close friend of Nelson Rockefeller.

Stark scripted two newspaper strips in the 1930’s, “Chip Collins Adventurer” and “Inspector Wade”, which was reprinted in comic book form in Magic Comics. He would also collaborate with Jerry Robinson on the “Jet Scott” daily strip that ran in The New York Herald Tribune from 1953-1955.

Stark was best known for a prodigious and long career as a writer of both radio (including “Green Hornet” and “The Lone Ranger”) and television (including “Studio One”, “Wagon Train,” “Batman”, “Green Hornet,” “The Man from UNCLE” and “Quincy”). His first play “Time of Storm”, which addressed the dangers of McCarthyism, won a 1954 Best of Season Award. Long active in industry issues, Stark helped form the Radio Writers Guild and later taught screenwriting at UCLA.
“Jigger and Ginger” was drawn by Adolph Shus, who would go on to be an illustrator for The New Yorker, Collier’s and other magazines of the period. Jigger is a college student. Ginger is his girlfriend. Jigger’s fraternity brothers try to block his date with his girl by grabbing him for initiation into their ranks. Jigger turns the tables on the guy who tried to beat his time with Ginger. 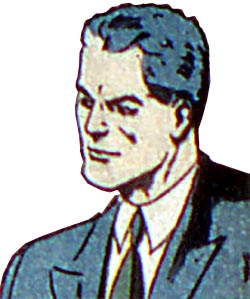 “Barry O’Neill” is next. Written by Wheeler-Nicholson, the feature  is based on the prose story "The Horror of Fang Gow" from Top-Notch Magazine (February 1933). O’Neill is an American playboy who, with French Intelligence officer Le Grand battles a Chinese cult-leader, alchemist, terrorist, and warlord called Fang Gow, the "inscrutable and vengeful enemy of the Human Race.”

The strip was drawn by Lawrence Lariar and his name is familiar to me because he appeared in the graphic novel Invisible Ink: My Mother’s Love Affair with a Famous Cartoonist by Bill Griffith, best known for creating Zippy the Pinhead. Lariar was also a prolific mystery writer, the cartoon editor of Liberty Magazine and Parade and a contributor to many leading magazines.

No one in this first appearance shows any actual personality beyond the typical “stalwart heroes” and “crackling fiends” roles. O’Neill would appear in New Fun, then More Fun and New Adventure Comics until early 1941. 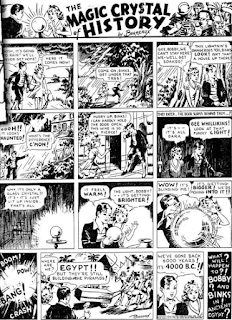 “The Magic Crystal of History” is by African-American writer/artist Adolphe Barreaux, arguably the first Black creator to have appeared in a comic book. He had a long and interesting career. He created “Sally the Sleuth,” who appeared in spicy pulp fiction magazines and had a penchant for losing her clothes in the pursuit of criminals. Barreaux ran a comics art shop, contributed to many comics and pulp magazines and was an editor at Trojan Magazine and at a branch of Fawcett Publications.

I got a kick out of “The Magic Crystal.” A pre-teen boy and girl, caught in a storm, enter a “haunted” house for shelter. When they see and approach a glowing crystal ball, the object gets larger and draws them in. They arrive in Egypt of 4000 BC. I was impressed the kids could pinpoint their position so precisely after two panels of the story. I’d like to see more of this strip.

This is where we end the first installment of our look at New Fun #1. I’ll return to this landmark issue next week. In the meantime, I’ll be back soon with other stuff.

Posted by Tony Isabella at 8:44 AM