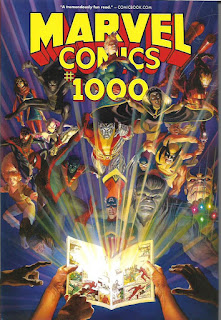 I have, in these recent months of pandemic isolation, found myself feeling quite nostalgic about the Marvel Comics comic books of the 1960s and the early 1970s. Part of that is fueled by my love of the characters as they were portrayed back then and part of it is fueled by the very nice e-mails and messages I’ve gotten from readers who tell me my own work from that era holds up very well and, in some cases, much better than the superstar writers of those times. For a guy who had come to think of himself as little more than a dependable utility player, this has been something of a revelation.

When I was growing up, once I discovered the works of Stan Lee and Jack Kirby and others, Marvel was clearly more exciting, more fun and more personal. There were great DC Comics characters and titles in the 1960s through today, but, over all, Marvel was just better. This might sound strange coming from a guy best known for creating Black Lightning while a freelancer at DC Comics. It is what it is.

Black Lightning is the comics work of which I’m most proud, but I had a lot of fun working at and writing for Marvel Comics. I think I did some terrific work there and, to this day, I feel tremendous warmth for the people I worked with there. Even those that gave me some grief at times. That’s not to say there aren’t people I worked with at DC for whom I have the same affection. There just weren’t as many of those as at Marvel.

Coming at it from my own perspective, especially in the super-hero genre, Marvel has always (over all) done better comic books than DC. Sadly, this is kind of moot for me in 2020.

For the most part, I’ve little ongoing affection for current titles from either place. While there will always be exceptional titles, many of them strike me as labored. Others as too mired in an ever-changing continuity.

Indeed, I roared with laughter when a friend informed me that some DC characters are now aware that their reality keeps changing. And, I got a little misty when I recalled Kurt Busiek had done that same story brilliantly in just two issues of Astro City. The DC version will doubtless take a few dozen comic books to unfold.

Marvel and, to a lesser extent, DC Comics will always loom large in my lifelong love of comic books. It seems unlike I’ll ever again be asked to write for either, but that doesn’t dim my regard for the good comics and the good people I encountered at both those publishers. You never forget your first loves.

Moving on to this week’s reviews...

Marvel Comics #1000 [$29.99] is a handsome hardcover collection of the title issue and the subsequent #1001 in which I played a small part. Small = a single-page Kid Colt Outlaw adventure drawn by Tom Mandrake. If editors keep asking me to write one-pagers, I may get to work with all the great artists I have not yet had a chance to work with. But I digress.

This was my second time reading these very short stories. I think I enjoyed many of them more on that second reading. My favorite of Marvel Comics #1000 was “Because of Her” featuring Gwen Stacy and Mary Jane Watson by Gerry Conway and artist Greg Land. There were several other memorable ones as well with characters as diverse as America, Junior Miss, Tessie the Typist, Venus, Doctor Strange, Ken Hale the Gorilla Man, Doctor Octopus, Galactus, Conan, and others.

While excessive and obsessive continuity gives me heartburn, I do extend kudos to writer Al Ewing for more or less tying all of these one-page stories together. I appreciate the effort.

Also deserving of mention are the eighteen variant covers that run between Marvel Comics #1000 and #1001. I pity the collector who had to have all of them.

Modesty prevents me from naming my favorite one-pager from Marvel Comics #1001, but there were many wonderful ones to choose from. Miles Morales and Ms. Marvel. Tigra. Sleepwalker. Blonde Phantom. Captain America. Squirrel-Girl.

Casual Marvel Comics readers probably won’t love this collection as much as I do, but I recommend it to them nonetheless. It’s one of the best books of 2019. 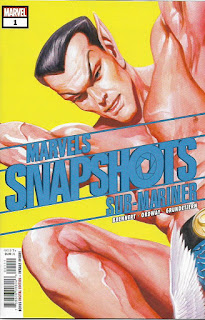 Since current comics news often horrifies me, I don’t pay a lot of attention to it. So all I knew about the Marvels Snapshots series was they were done-in-one specials written by writers whose work I usually enjoyed. It wasn’t until I decided to review the books that I did a Google search and learned this:

Prepare to see the greatest moments of Marvel’s 80-year history told like never before! In MARVEL SNAPSHOTS, industry legend Kurt Busiek will bring together incredible creative teams for eight standalone, double-sized issues showcasing Marvel’s most beloved characters from the Golden Age to today. Like 1994’s critically acclaimed MARVELS series, MARVEL SNAPSHOTS will be tales told through the eyes of ordinary people, offering unique insights on the legendary mythos of the Marvel Universe. MARVELS SNAPSHOTS also reunites Busiek with renowned MARVELS co-creator Alex Ross who will be providing the series with his iconic painted covers.

The first of the books was Sub-Mariner: Marvel Snapshots #1 [$4.99] by writer Alan Brennert with artist Jerry Ordway, colorist Espen Gruenetjean, letterer VC’s Travis Lahham and editor Tom Brevoort. Set shortly after World War II, it’s an emotional tale of the post-war reunion of Namor and Betty Dean that examines the gulf between those star-crossed lovers and the war’s aftereffects on them and others.

Brennert, to me, is the one that got away. He has not written many comics, but they have all been memorable ones. As I read “Reunion,” there were several scenes that put a lump in my throat. There was a universal quality to the suffering that reminded me of events in my life. I was nearly moved to tears on a couple of occasions.

Ordway. There is no sane reason in this industry that Ordway isn’t being courted by every comics publisher in our industry. When this guy draws people, even super-people, they are real. When they walk down the street, you can feel the breeze that swirls around them. When the heroes and villains explode into action, it’s as if we were watching a summer cinema blockbuster. Fantasy and realism combined in glorious union. I wish I could do a comic with him.

Sub-Mariner: Marvel Snapshots #1 is one of the best Namor stories of all time. As you will see, that could be the trademark of this Busiek-inspired series of comic books. 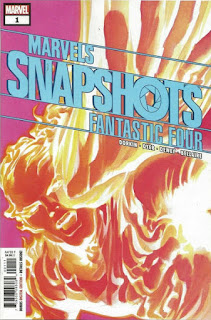 One more for this edition of “Tony’s Tips” and it’s Fantastic Four: Marvel Snapshots #1 [$4.99] by writers Evan Dorkin and Sarah Dyer, artist Benjamin Dewey, color artist Jordie Bellaire, letterer VC’s Joe Caramagna and editor Darren Shan. This snapshot focuses on the Human Torch returning to his home town for his 10-year high school reunion. It’s an heartwarming tale of human relationships, small-town pride and what even a celebrity will do to preserve the things that matter most.

The issue is filled with nice character bits and surprises. Well-written and well-drawn, it’s one of the best Human Torch stories of all time. This is the kind of comic book I live for.

There will be eight Marvel Snapshots special in all. Sitting on my review pile for next week is the Captain America issue with a story by Mark Russell and art by Ramón Pérez. Other specials will include the Avengers and the X-Men. I plan on reading them all. You should plan on that, too.

I’ll be back tomorrow with an anniversary celebration of a classic character I was associated with for several years. See you then.

Posted by Tony Isabella at 8:56 AM