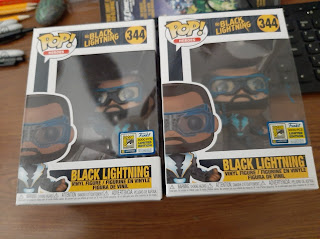 Funko has produced a wonderful Black Lightning Pop as a Comic-Com exclusive limited to 3000 figures edition. I have no information on how you can get one of these when there’s no physical Comic-Con for this year. I’m fairly confident that 3000 figures won’t be enough for all the Black Lightning fans who want one.

The exceedingly kind folks at Funko sent me samples of the figure, which is based upon the character as portrayed by Cress Williams on the TV series. I have suggested Funko do a general release of this figure because that would make for an awesome holiday gift for the fans who don’t get one of the 3000. In my dreams, it sells so well we get Funko figures for Tobias Whale, Peter Gambi, Thunder, Lightning, Lynn, Painkiller, Inspector Henderson, Dr. Jace, Agent Odell and those federal judges who appeared in the finale of Black Lightning Season Three. This is where I’ll allow you to make rude comments about how the Hon. Judge Isabella already looks like a Funko figure.

Black Lightning merchandise is a matter of concern for me because, traditionally, African-American characters are under-served in this  area. From the many conventions I have attended and the many Black Lightning fans I have met, I know there’s a demand out there that savvy manufacturers could profit from.

I also remember with dismay how the character Static was promoted at a time when the Static Shock animated series was getting amazing  ratings and winning awards. During that whole time, I saw exactly one Static Shock item. It was a small giveaway figure from Subway  and, near as I can figure, it wasn’t even a national promotion. I never did figure out how the figure got to a Medina, Ohio Subway, what with my community being predominantly white.

If you are someone who has a Black Lightning license and produces a quality product, email me. I will help promote your merchandise for no fee beyond your sending me several of each of the BL items you’re making. If you need me to do this in person, you will have to pay my hotel and travel expenses. But that’s it. No spokesperson fee.

If you want Black Lightning swag, don’t be shy about contacting DC Comics and Warner Bros and anyone else you think might respond to your requests. Hey, AT&T is the new owner of those companies. Maybe they could use the Black Lightning cast in their commercials. Just imagine the chemistry between Lily and Jennifer.

While you’re doing all this imagining, let’s talk about this week’s review items... 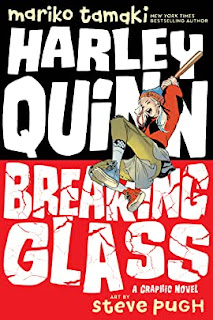 DC Ink is one of DC’s newer imprints. It presents DC characters for the young adult market. These graphic novels are not in the current DC Universe continuity, which for me is a huge plus.

Harleen Quinzel is 15 years old in this book. Sent to live with her grandmother, she arrives to find her relative has passed and ends up living with a friend of the family. That friend is Mama, one of Gotham’s top drag queens and the owner of a club that has fallen on hard times.

Harley goes to Gotham High where she meets her new best friend Ivy and, like her progressive pal, runs afoul of the school’s elitist clique. Their neighborhood is threatened by a corporation seeking to flatten and gentrify everything Harley and Ivy and Mama love. Added to the mix is a young anarchist who called himself Joker and lives to create chaos. Harley is drawn into Joker’s plans. Which is all I’m telling you.

The writing and art on this graphic novel are beautiful. I love how Harley comes into her own without being either physically abused or emotionally attracted to Joker. I love how social issues are part of this story without overwhelming it. And I love be able to read comics with great DC characters without having to wide through all the misery and obtuse continuity of the DCU comic books.

Harley Quinn: Breaking Glass gets my highest recommendation. Buy a copy for yourself and then buy several more for gifts. You’ll make some young and old comics readers very happy. 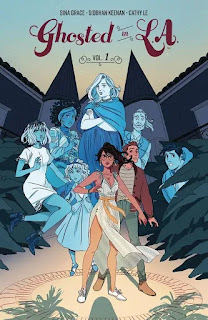 In any other week, Ghosted in L.A. Volume 1 by Sina Grace, Siobhan Keenan and Cathy Le [Boom! Box;$14.99] would have been my pick of the week. To quote the back cover, it’s a story about finding your way in Hollywood, love and the afterlife.

Daphne Walters follows the guy she thinks is the love of her life to college in Los Angeles...and he breaks up with her immediately. She moves into an abandoned (by the living) apartment complex. She meets ghosts. Some of them accept her. Some of them hate her. Her life gets very complicated and more than a little scary.

The scary is the icing on the top of this delicious graphic novel treat. Engaging and mostly likeable characters. Humor and mystery and romance and revelations and the scary. Some of the last comes when you least expect it.

I enjoyed this first volume so much that I’ve already ordered the second one. I recommend it to teen and older readers. 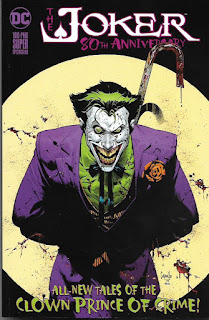 The kindest thing I can say about The Joker 80th Anniversary 100-Page Super-Spectacular [DC Comics; $9.99] is that they can’t all be winners. I have to share the blame for my disappointment. I dislike the Joker, especially the way he’s written these days and how he’s possibly the most overused villain in comics. I knew exactly how I felt about the character, but I have a sometimes illogical love for any and all comic books of 100 pages or more. I like big comics and I cannot lie.

There were a few stories I found worthwhile. Scott Synder’s “Scars” (art by Jock) was very well written. “Introducing the Dove Corps” by the late Denny O’Neil (art by Jose-Luis Garcia-Lopez) was quite the change of pace from O’Neil’s usual writing. I found it amusing. Paul Dini’s “The Last Smile” (art by Riley Rossmo) offered insight into Harley Quinn’s relationship with the Joker. Beyond these three stories, my reaction was “meh” at best. Okay, some of the pin-ups were nicely drawn.

If you’re a fan of Batman or the Joker, you probably already bought this special. If you’re only occasionally interested in those two characters, I recommend you give this issue a pass. 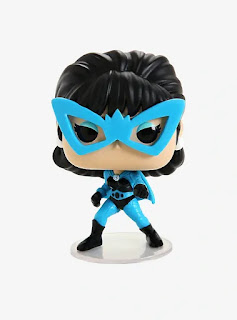 I added another new Funko figure to my small-but-growing collection of these fun items. It’s the Black Widow, as she appeared when she got her first super-hero costume. She’s currently in the place of honor by my desk, sharing that space with Black Lightning and Luke Cage. Black Lightning and Black Widow replaced Betty Boop and the Mole Man.

I can’t afford the pricier Funko figures, but I always look at the displays when I go to Target or Walmart. I might visit the Medina GameSpot store when I’m in that particular shopping area. Back when we had conventions, I would nervously look at the looming displays of Funko figures with a bit of fear.

At the end of the day, Funko makes some cool stuff. It’s cool stuff that makes me and many other people happy. That’s not a bad thing to achieve. More power to them.

I’ll be back next week with another “Tony’s Tips” column and back on Monday with some other stuff. See you then.

Posted by Tony Isabella at 1:53 AM