FROM THE FILE CABINETS 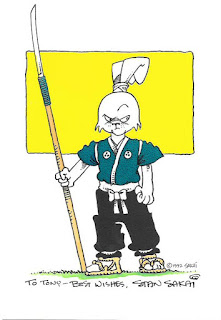 I’ve been slowly going through my bursting file cabinets in search of both files that can be tossed and files that contain cool stuff I can share with my bloggy thing readers. Here are recent discoveries...

Back in the good old days of the newsprint weekly Comics Buyer’s Guide, when I had the time, means and inclination to read hundreds of comics every month, I wrote a column called “Tony’s Tips!” I have been writing that column in one form or another for something like three decades now.

One of the most popular installments was my annual “Top 40" listing of the top forty comic-book series or graphic novels of the preceding year. In my rankings for 1991, Stan Sakai’s Usagi Yojimbo claimed second place. If I could remember what came in first, I would share that information with you. I don’t. I’m old.

Stan was overjoyed to have been placed so high on the list. Which is why he sent me the above drawing and a very nice letter. Since the letter also had an original drawing, I’m going to see if I can put a good scan of said missive right about here: 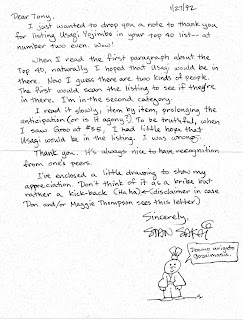 Usagi Yojimbo is still one of my favorite comic books. I have been rereading the series in those big fat collections from Dark Horse Comics and Fantagraphics Books. Those took me through the Dark Horse issue #158. Since it appears there will be no more of those hefty trade paperbacks from Dark Horse - IDW is now publishing the title - I plan to start getting the small trades that collect issues #159 and beyond. You can’t read too much Usagi Yojimbo. 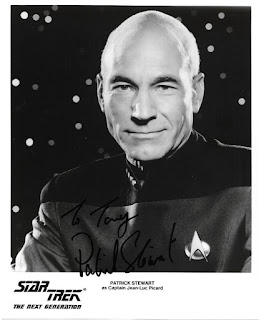 Bob Ingersoll and I were and probably are still honorary members of the USS LaGrange, a spiffy starship of the Federation. They never beamed us up to the ship, but did invite us to be guests at their first LaGrangeCon in 1990. Since we had written Star Trek comics, we were kind of sort of second-tier celebrities. Indeed, they even asked us to conduct the opening ceremonies at the beginning of the first day of the event.

Mostly winging it, Bob and I actually managed to do a good job for the convention. The audience was excited, though probably more in anticipation of the arrival of Guest of Honor Patrick Stewart. But our jokes landed well, the fans liked us and we were entirely adequate to the task set before us. There was only one small problem that we had to deal with.

Through no fault of his own, Stewart was late. There had been some delays in his flights. It took him an ungodly length of time to get to the convention. We vamped until he arrived, but the only thing I remember about that part of the day was the panic that the audience would turn on us.

When Stewart arrived, he hadn’t eaten in quite a while and looked tired. The convention organizers offered to postpone his talk and his signing - he would be signing for free - until after he’d eaten and rested. Stewart declined.

Stewart said it wasn’t the fault of the waiting fans that his plane was delayed. He wouldn’t disappoint them. He talked for a while and then began signing. The organizers offered to give him a break to do the afore-mentioned eating and resting. In a manner that would have made Captain Picard proud, he pointed to the fan at the end of the line and said:

“When that gentleman back there has his signed photo, that’s when I’ll take a break.”

Right then and there, I’d have followed him into the very bowels of the Borg Empire. My captain, my captain.

Sometime during the convention, Stewart signed photos for each and every member of the crew who had put on the convention. Including his hopelessly outclassed opening act. 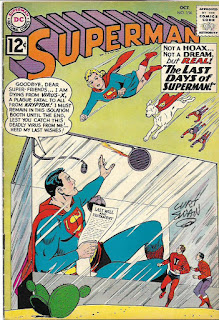 Signed by Curt Swan, this copy of Superman #156 [October 1962] is one of my most prized possessions. Swab’s autograph made an already special comic book even more so.

Written by Edmond Hamilton with art by Swan (pencils) and George Klein (inks), “The Last Days of Superman” is my favorite Superman story of the Silver Age. Featuring literally dozens of supporting characters, it’s an epic in 24 pages. If DC did the story today, it would probably take a dozen issues plus another dozen “red skies” tie-in comics.

Superman appears to have been contaminated with Virus X, a lethal Kryptonian pathogen. He has one month to live and is determined to spend his final days accomplishing great feats he had put off for too long. His health comes and goes during this time. To accomplish his tasks, he calls on his friends.

In this story, we see the nobility of Superman. We see how much he means to his friends and the world. And, with what may be his last burst of energy, he uses his heat vision to carve an inspirational message onto the surface of the moon:

Do good to others and every man can be a Superman.
That clear message probably has as much to do with how I try to live my life has anything else I’ve ever read in my life.

Since there was a Superman #157, you can probably figure out that Superman didn’t die in this issue. How he survives is a brilliant plot development. It made for a satisfying ending.

There’s another reason this comic book is so precious to me. Near the end of his life, Curt Swan and I became convention friends. He was drinking too much those days. No matter my own circumstances, I usually managed to take him out for a good meal somewhere during the convention. We talked a little bit about comics and those were not always happy conversations. We talked about art and conventions and storytelling. I think I was a safe zone for him, just as I’ve tried to be one for other folks at conventions. I won’t tell you I knew him well, but I knew he liked me and I liked him. He remains one of my favorite comics artists.

Do good to others and every man can be a Superman.
It’s a good message. I supplement it with one of my own:

Justice, like lightning, should always appear, to some men hope and to other men fear.
Predators and those who enable them should face consequences for their actions. As we have seen in recent weeks, there are few consequences for the enablers. Without those consequences, there cannot be true justice for the victims of the predators.