BLACK LIGHTNING HAS THE GREEN LIGHT 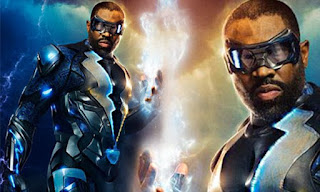 As reported by Variety, Hollywood Reporter and several comic-book news sites, Black Lightning has been given the green light. I was 99% sure this news was coming - because sources - but it wasn’t my place to announce it. That’s something I deal with regularly these days. I know more than I can say, even when what I know can correct reported misinformation.

Variety did include that information and in the official wording of  “Black Lightning created by Tony Isabella with Trevor Von Eeden.” In the article’s comment section, I thanked them for that courtesy (and good journalism) and added:

My thanks to DC’s Geoff Johns, Greg Berlanti, Sarah Schechter and the wonderful Mara Brock Akil and Salim Akil. They have my confidence, love and respect. They have made this old comics guy incredibly happy.

As has happened every time there has been Black Lightning news of the television kind, my e-mail and private Facebook messages have been blowing up and my phone has been ringing. I’m trying to answer the e-mail and messages as fast as I can. I am screening phone calls and only responding to those leaving messages with names, reason for calling and return number. Alas, I lack “people” who can do this for me. I ask for patience as I try to squeeze my return e-mails and calls in between my writing and family/household errands. However, there are frequently asked questions I can answer without violating my assorted confidences.

QUESTION: What is your role with the show?

ANSWER: Cheerleader. I can’t get you a job writing for the show or acting on the show. I’m not writing the show. All of those are way above my competency level. The show is too important for me to want some inexperienced guy like me making decisions.

That said, when DC and I started our long reconciliation, there was some talk of my being a consultant on stuff. We haven’t discussed it recently. If DC tenders such an employment offer, I’d certainly be interested. But as it would depend on so many different factors, I’m not going to speculate about it.

I’ve talked to Mara and Salim. I think their ideas are well within what I consider my Black Lightning comfort zone. I think they're going to do a great show.

I have read a version of the pilot script. Because sources. I loved it. I suspect there might be some changes made to it before it goes before the cameras. (Do they use cameras anymore? Is that a dumber question than even I think it is?)

It’s likely I will invited to the Black Lightning set at some point in the future. Probably for publicity and because DC is treating me well. Possibly so the actors can rub my greying head for good luck before they shoot a scene.

But the short answer remains accurate...cheerleader.

QUESTION: Would you like to write for the show?

ANSWER: Yes, but not until I teach myself how to write screenplays and then good screenplays. I had started doing this for something else, but had to put that aside when I took on other work. I figure I’ll be ready come season three. If audience will watch the show in big enough numbers for it to have a season two and three and so forth, I’ll try to do my part.

QUESTION: Will you be doing a cameo in the show?

ANSWER: Only if they can’t get Stan Lee on account of that guy is really good. If asked, I’d probably do it...even though the thought of it terrifies me.

QUESTION: Will Black Lightning be set in the Arrowverse (Arrow, The Flash, Legends of Tomorrow, Supergirl)?

ANSWER: I don’t know. If this were my call - and I can’t stress strongly enough that it’s not - I’d prefer to see Black Lightning on his own for a good long while.

QUESTION: Will Static be appearing on the series?

ANSWER: Again, if it’s my call, which it isn’t, no. Black Lightning doesn’t need Static and Static doesn’t need Black Lightning. Also, among the many things I don’t know is the actual rights situation between DC and Milestone. I can only hold so much knowledge in my brain and do so much thinking before smoke starts coming out of my ears. It’s not a pretty sight.

QUESTION: Why is Black Lightning a “mid-season replacement” and not starting in the fall?

ANSWER: Look. No one - and I do mean, no one - is more excited to see Black Lightning on TV than me. But I’m not sure the term “mid-season replacement” is even a legitimate thing anymore.

When I was a kid, we had dinosaurs and only three channels. All of the shows started in September and ended in June, followed by two or three months of reruns. We don’t live in those prehistoric times anymore.

Networks start shows whenever they want. There’s always something new on the fifty thousand channels we now have. Not to mention all of the streaming shows that make all a season’s episodes available on the same day.

Would I like to see Black Lightning sooner? Of course, I would. Am I concerned I have to wait? Not in the slightest. I don’t know TV. DC and the showrunners and the CW do. If they think “mid-season” is the right time to debut Black Lightning, I’m absolutely fine with their decision.

QUESTION: Will you be doing conventions in support of the series?

ANSWER: Probably. If DC and/or the CW want to bring me somewhere to support the series, I’ll be delighted to oblige them. I feel like I’m part of those families. The crazy uncle of comics.

Two of my 2017 convention appearance are tied to Black Lightning in some way. Later this month, Sainted Wife Barb and I will be going to Philadelphia for the East Coast Black Age of Comics Convention. The night before the one-day convention, at the opening ceremony, I will be receiving a Pioneers Award for my lifetime of working in comics and on characters of color.

I’ll be adding several Vast Accumulation of Stuff Garage Sales to that schedule in the near future. Also, I haven’t ruled out adding a 2017 convention or two to my schedule if the right circumstances  come along. If I do, I’ll announce them here.

QUESTION: Will you do interviews about Black Lightning and the TV series?

ANSWER: Yes. If DC or the CW ask me to do them, it’s a given that I’ll accommodate them. If others ask me, I’ll definitely consider those requests and, depending on what else I have going on, I will likely agree to most of those requests.

QUESTION: Thanks for answering our questions which we didn’t ask, Tony. Is there anything we can do for you?

ANSWER: Yes. When you see a news story about Black Lightning or any other comics-spawned TV show or movie, remind the writer that real-life human beings created the characters who are making the leap to movies or TV. I’d like to see a news media where including the names of the comic-book creators becomes so second nature to these reporters that we never have to ask them to do so.

Thanks for asking such intelligent questions today. I will return tomorrow with a report on my Free Comic Book Day at The Toys Time Forgot in Canal Fulton, Ohio.

Posted by Tony Isabella at 5:27 AM