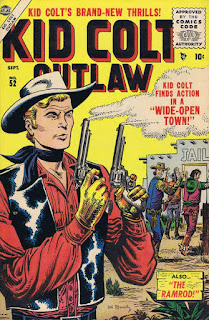 We were looking at Giant-Size Kid Colt #1 [January 1975], a 68-page comic book featuring Kid Colt and the Rawhide Kid in an original 15-page adventure written and drawn by Larry Lieber with inking by Vince Colletta. In yesterday’s installment, we discussed that story and a few other odds and ends. Today, we’re going to talk about the some of the seven reprinted tales backing up the cover story. Six of the reprints tarred Kid Colt; the seventh was a non-series story by Stan Lee and Gene Colan. As I write about these stories, it’s probably best to assume that there will be SPOILERS...

The first three Kid Colt stories and the non-series tale all come from  Kid Colt Outlaw #52 [September 1955]. The cover of that issue (as seen above) was by Joe Maneely. The Kid Colt stories from that 1955 issue did not have titles, so I’ve come up with my own.

“Stockton” (6 pages) was written by an as-yet-unidentified writer and drawn by Jack Keller. The story:

Stockton was a neat, clean town when Kid Colt last passed through it. Since then, gold was discovered nearby and gambling houses have been built to take the money of the hardworking miners. The town is in dire straits with no future for decent people.

Those decent people ask Colt for his help in cleaning up the town. With his help, they campaign for a better town and show the miners how they get bupkis for the money they lose to gamblers. Taking the message to heart, the miners stop gambling and donate to a fund to build up the town.

The gamblers take offense to this. They try to stop Colt by force. But they can’t stand against a united townspeople and must flee the  town. The good people of Stockton then burn the gambling houses to the ground.

It’s an unbelievable story which left me shaking my head. Burn down the gambling houses? I mean, they couldn’t find some other use for those buildings? Sheesh!

The story is followed by full page ad for such Marvel merchandise as Spider-Man and Hulk model kits, a Spidey squirt gun, a Spider-Mobile, Spidey Foam and more. Nothing on the page was priced higher than $5.98 (the Spider-Mobile). The other items ranged from $1.25 to $2.98. What bargains!

“Silver Valley” (6 pages) is also drawn by Keller and, once again, the writer has not yet been identified. The story:

Kid Colt rescues am older man from a hungry bear and then has bacon and coffee with the man. Colt is on his way to “pressing business” in Culver County and asks for directions to the shortest trail to Silver Valley. The old man tries to steer Colt clear of the valley, but the Kid is in a hurry.

The road trip is harrowing. Colt is attacked by an unfriendly band of Native Americans and only escapes because they respect him as a warrior enough to let him pass in peace. He encounters a blizzard and hungry wolves in a mountain pass. He is blistered by the sun in the lowlands. He fights and captures murderous stagecoach robbers. Despite all these distractions, Colt reaches his destination: the place of his friend Jim Wyatt.

Why did Colt have to get to the Wyatt spread so quickly? Because he wanted to be there for young Jody’s birthday and give the lad the silver spurs Jody wanted. When Jim asks the Kid how his trip there went, Colt says there was nary a ripple.

I love this story. It’s action-packed with a wonderful punch line. The writer did his job exceedingly well.

“The Ramrod” (5 pages) by Stan Lee and Gene Colan was a non-series story. A wild-eyed man in a Confederate uniform rides into Pawnee, shooting into the air. He charges into the saloon, demanding Dixie music. He insults brave men who fought on both sides of the war. He goads a man into a duel and, fortunately, only shoots the guns out of that man’s hands. When he tries to buy the house a drink, he’s told his Confederate money is now worthless. He proclaims he will rob the bank, but then sits down at a table and waits for the town sheriff to come and face him.

The town wants to know why Sheriff Alf Durand hasn’t done anything about this man. Durand walks into the saloon alone. He faces the wild-eyed man and speaks:

Men have always fought for causes and died for them! The world has gone ahead! You’re no different! It’s over now and the nation is stronger for it!

Stand up, Ramrod! Get on your feet, because I am to make you a man! On your feet, you selfish, bawling cry-baby! Get up!

Durand shoots the gun out of Ramrod’s hand, then proceeds to beat the crap out of him. The sheriff tells Ramrod he’ll be a better man now. To forget the past and live for the future.

The twist ending? Ramrod knows the sheriff, but thought Durand was killed at Vicksburg. But Alf was only wounded and recovered from his injuries.

Durand tells the townspeople to get Ramrod to a doctor and assures them the man will be all right now. The sheriff should know. He was Ramrod’s commanding officer...and his brother!

“The Ramrod” is a well-written and well-drawn story, but it hails from a time when foolish people were more forgiving of the slavers of the South. We can now longer afford such forgiveness. Not when our President is a racist who has placed other racists in important positions. Not when vile white supremacists march and protest while waving around torches. Today, this well-written and well-drawn tale makes me sigh in sadness and disgust.

“Bad Blood” (6 pages) is the third and final story reprinted from Kid Colt Outlaw #52. The writer is unknown at this time, but Jack Keller is once again the artist.

Riding into an unnamed town, Kid Colt stops a gunfight by shooting the guns out of the hands of both men. The feud between the Dawson and Moore families has been going on so long that no one remembers what started it. But it has heated up because Ed Moore believes his brother was murdered by Dawson.

Hearing the story from Dawson, Colt believes the man is innocent. Moore’s only living kin is his half-cousin Clyde Hanson, so Moore has taken the death of his brother real hard and vowed to kill Dawson. Hence, the attempted gunfight.

Colt does some deducting. When the death of his brother, the whole of the Moore ranch went to Ed. Dawson is shocked at the idea that Moore himself is the killer, but agrees to join the Kid to do some investigating. They ride to the spot where the younger Moore was shot in the back. An unseen shooter tries to bushwack them, but he misses and rides off.

Colt rides to the Moore spread to confront Ed. The Kid tells Moore he thinks he knows who killed his brother. Moore doesn’t believe it was anyone other than Dawson. But Colt tells him he’ll be waiting at the entrance of Wolf Canyon with the proof. This is where Ellery Queen shows up and tells you that you have all the clues you need to solve this murder that I solved back on page two.

Colt and Dawson ride to the canyon. There’s no sign of Moore. Then Cousin Clyde gets the drop of them. Clyde figured that, if Ed was killed in a gunfight, the ranch would be his.

Colt didn’t have this figured out all the way. He thought telling Moore he had a hunch who the killer was would make the back shooter come out in the open.

Clyde says Colt and Dawson will never tell anyone what they know. But he whirls at a voice from off-panel.

Ed Moore, who had come to the canyon to kill Colt and Dawson, heard everything. Colt keeps Clyde from shooting Ed.

Moore feels low, but is glad Clyde will pay for his crime. He then shakes hands with Dawson. The feud is finally over...and that’s all the reward Kid Colt needs.

This was a good little story. I want to point out that none of the three Kid Colt reprints make much if anything of his being a wanted outlaw. He’s just a wandering cowboy helping people out wherever he goes. It’s a nice change of pace from the “man on the run” stories that are so prevalent in most Kid Colt and Rawhide Kid comic books.

That’s it for part two of this extended installment of “Rawhide Kid Wednesday.” I’ll be absent from the bloggy thing for a few days to attend The East Coast Black Age of Comics Convention in Philadelphia, but will return on Monday for the third and final part.

Posted by Tony Isabella at 7:22 AM