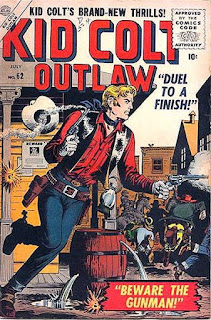 We’ve been looking at Giant-Size Kid Colt #1 [January 1975], a 68-page comic book that featured Kid Colt and the Rawhide Kid in a new 15-page adventure written and drawn by Larry Lieber with inking by Vince Colletta. In part one, we discussed that team-up story and a few other odds and ends. In part two, we covered four of the seven reprinted tales that followed the new. Six of them starred Kid Colt and the seventh was a non-series story by Stan Lee and Gene Colan. For this final installment, we’re looking at the last three of the reprinted stories, all starring Kid Colt. It’s best to assume that there will be SPOILERS AHEAD...

The remaining reprint stories are from Kid Colt Outlaw #62 [July 1956]. The cover of that issue (as shown above) was by Joe Maneely. There were four Kid Colt stories in that issue, but, surprisingly, only one of them was drawn by Jack Keller.

“Duel To the End” (5 pages) was drawn and lettered by Dick Ayers. The writer of this story and the remaining two reprints in Giant-Size Kid Colt #1 has not yet been identified.

A casino is abuzz with the news Charro Dance has come to town. He’s a noted gunslinger who was double-crossed by Rock Gavin. When Rock tries to have his men come with him, Kid Colt gets in the way. If there’s gonna be gunplay, it’s be a fair fight. Despite the Kid’s interference, Gavin already has a man in place on a roof to shoot Dance. Then something unexpected happens.

“Charro Dance” walks right by Gavin. When Gavin calls him out, the man seems puzzled. He’s got no argument with Rock. Gavin draws on him anyway, but Kid Colt shoots the cylinders out of Rock’s guns. Then Colt rides out of town with the befuddled stranger.

The stranger’s last name is Dance, but he’s no gunslinger. He came to town to open a print job and, stubbornly, he still intends to do just that.

A week later, in another town, Colt sees the stranger again. This time, though, the stranger has no idea who the Kid is. Because it’s not the guy who wanted to open a print shop. It’s the real Charro Dance.

Once Charro hears Colt’s story, he reveals that the printer is his twin brother, who he’s been separated from since they were kids. He would have found his brother before this, but Charro was ashamed of his gunslinger reputation. Colt and Charro ride back to the town.

They find the smouldering ruins of Johnny Dance’s print shot. The fire was set by Rock Gavin, who then left Johnny half-dead. It was a bad move on Gavin’s part.

CHARRO: We’ll make it a twosome from now on, Johnny! You’ll get that print shop an’ I’ll help you run it!
COLT: And I’ll drop by every so often to see you’re not runnin’ out of ink!

This was a fun story, though I think it could have used a few more pages to expand on the multiple befuddlements.

“Beware the Gunman!” (4 pages) was drawn by John Severin. It’s the only one of this issue’s reprints that specifically mentions that Kid Colt and the law “don’t exactly see eye to eye!”

A youngster sneaks up on Kid Colt’s campfire with guns drawn. The Kid tells the lad he has no money. The lad says he’s after grub on account of the law is on his tail and he can’t travel on an empty stomach. Colt offers to share his food.

The young man weaves quite the tale of being a ruthless outlaw on the run. When asked his name:

Covering his mouth to stifle a laugh, the actual Kid Colt suggests they team up. The youngster agrees readily.

The fake Kid Colt says they should find some rich casino, jump the place and then get out. The real Colt is aghast:

You mean just an ordinary everyday robbery? I always heard Kid Colt never robbed cold! I thought you played it straight and square!

Fake Colt says he was just testing Real Colt’s nerve. They ride into town. Fake Colt is amazed that everyone is ducking for cover. Real Colt explains:

They know better than to stand in the open when a gunslinger like you rides into town, Kid!

I reckon you’re right! These weasels better not cross me or I’ll brace the whole town!
The smiling real Kid Colt says:

It’s mighty comforting riding with a big caliber hombre like you, Kid!

Inside the town’s leading “den of gambling,” Spade Reed, who has faced the real Kid Colt before, orders one of his men to tell the Kid to come into the saloon ready to swap lead. The real Colt tells his imposter Reed is a mighty rough customer.

Making yet another bad choice, the fake Kid Colt enters the casino for the showdown. Reed laughs at the lad and knocks him down. Which is when the real Kid Colt walks in. One panel later, the real Colt is shooting guns out of the hands of Reed and all his men:

This is the second time you talked me into a gunfight, Spade! The third time will be the last...for you!

I’m s-sorry, K-Kid! I ran away from home figurin’ to find adventure an’ danger, so I picked your name because...well, because you’re top gun in the west!

Well, go back home and forget it! You’ll find more adventure in books...and a lot safer kind, too!
I love this goofy little story. It could have used another page or two, but I love it. With the right actors, I could even see it as a short film. It’s my favorite story in this issue.

“The Dam!” (5 pages) is Giant-Size Kid Colt #1's final story. It’s drawn by Jack Keller, the artist most associated with Kid Colt in the 1960s. The tale is a rather grim one.

The Kid comes across the smoking remains of a sheep rancher’s home and spread. It appears to be the result of an ongoing war between sheep ranchers and cattlemen. The one survivor is a very young boy who witness his father being taken away by the men who did this to their home.

Colt takes the boy to town and makes it clear he’s planning to hunt down the men who killed the sheep rancher:

This lad was orphaned by some hyenas who massacred a flock of sheep and burned his house! Maybe those saddle tramps are here, an’ maybe not.

Every man’s got a right to earn wages an’ enjoy life as he sees fit! Some polecats denied those rights to this boy an’ his dad!

I’m going to find the buzzards who did this, and when I do, they’ll be bait for Boot Hill!

Outside the saloon, Colt is approached by Jeff Cantrell, who is a cattleman. He says he and his fellows are fed up with these feuds and swears none of them has anything to do with attacking the dead sheep rancher.

Colt believes Cantrell and asks him to keep on an eye on the young boy. The cattleman promises the boy will have a home. He also says the men in the valley will help Colt in his quest.

The Kid declines the latter offer. He’s used to playing a lone hand in such matters.

Colt comes across some sheep ranchers. Impossibly, their lands have dried up. The Kid knows this valley is fed by headwaters from the Sierras and they never dry up. He decides to investigate.

It will come as no surprise to anyone who, you know, read the title of this yarn, but a dam has been built to block the valley’s water. It was built by the polecats who killed the sheep rancher. Their plan is to make the sheep ranchers think the cattlemen are to blame and then buy up the cheap grazing land that will inevitably come on the market in the aftermath of a range war.

Colt goes after the killers, shooting the guns out of their hands and forcing them to blow up the dam. They set off the explosions prematurely, figuring Colt will be blown to bits and they’ll swim safely to shore. They aren’t good with this figuring stuff.

Colt makes it to safety. The bad guys get swept to their deaths in the surging waters that had been held back by the dam.

This isn’t a bad story, but, like so many of these short Kid Colt adventures, it could’ve used more pages. Colt’s personality is that of an avenger, but, beyond that, there’s not much to set this hero apart from the other Marvel western heroes. I always liked both the Rawhide Kid and the Two-Gun Kid better.

That wraps up this look at Giant-Size Kid Colt #1. There were too more issues in the series and I’ll get around to both of them down the road. I hope you enjoyed the extended coverage of this comic.

Coming up next - because I’ll be skipping “Rawhide Kid Wednesday” this week - are most likely three days of this and that, followed by my report on the East Coast Black Age of Comics Convention.

Thanks for following the bloggy thing. See you tomorrow.

Posted by Tony Isabella at 7:17 AM