IF IT’S TUESDAY, THIS MUST BE TONY 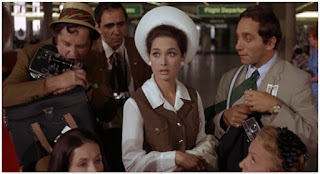 It’s been an interesting - mostly in good ways - several weeks for me. The news of the Black Lightning TV show being picked up by the CW was quickly followed by the release of that incredible trailer. I received a cherished Pioneer Life Achievement Award from the East Coast Black Age of Comics Convention in Philadelphia, which was a joy magnified because Sainted Wife Barb was with me and because my dear friend Don McGregor also received that great honor. However, all that joy was tempered by the usual insane and vile actions of Donald Trump and his goons and, especially, by the passing of Rich Buckler, legendary comics creator and old friend. I’ll be writing about Rich on Thursday and about ECBACC over the weekend.

Folks often ask me how I’m doing in the midst of all the above. The most honest answer I can give is...I’m not sure. I’m incredibly happy about everything Black Lightning and my new relationship with DC Comics/Entertainment. I’m in a state of perpetual dizziness over everything on my desk. I’m excited by what looms in my future. But I’m also sad because some of my friends aren’t doing as well and my ability to help them is limited.

I’m trying to be many things to many people, but, especially, to my Sainted Wife Barb. Her pharmacist job, which involves her making chemo for cancer patients and working very long hours on behalf of those and other patients, is challenging at the best of times. In addition to that, Barb is also handling her mother’s complicated situations. Her mom has Alzheimer’s disease and is living in a care facility while dealing with her divorce from a scumbag ex-husband.  There are financial and legal matters to be sorted out in a manner that will help her mom during these final stages of her life. It’s frustrating and time-consuming and I think it’s a wonder Barb has been able to keep her wits about her with only occasional bouts of screaming. I try to do as much as I can to help Barb, but I never think it’s enough.

When asked about my hopes for the future, a question usually asked in conjunction with the Black Lightning stuff, the truest response I can give is...I want to ride the lightning as long as I can in the hope of creating new opportunities for myself and other comics creators. It’s a lofty goal and I’m not certain it’s a reachable goal. I still have to try.

Anger is my constant enemy. Not so much my anger, though I surely have given in to anger on too many occasions, but the anger of the friends I hope to help. I listen to and understand their anger and would never claim they don’t have a right to that anger. But I know it’s going to get in the way of my being able to help them at some point down the line. I still have to try.

Before anyone starts humming “First World Problems,” rest assured I do know how fortunate I am. I recognize how much love, respect and support I have received and continue to receive. I often feel overwhelmed by how much I have to do and my apparent inability to balance it all. I still know I’m a lucky, lucky man.

Which brings us to today’s bloggy thing, a compilation of odds and ends that have been bouncing around my head over the past several days. Some of it is personal, some of it isn’t. I’m just trying to figure it all out while that “it” is getting bigger all the time. 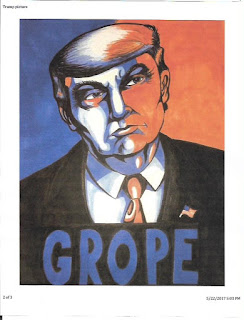 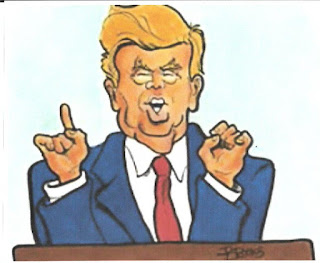 My best-laid plans don’t always work out. A while back, I asked for my artistic readers to send me cruel caricatures of Donald Trump. I planned to use these caricatures whenever I wrote about “Peepee Cheeto” and pay the artists five bucks every time I used their art in this bloggy thing. One of my readers thought it was such a great idea he donated $25 to the cause.

I’m posting both of them today. The first one is by Brian Wingrove of Bear Butt Comics. The second one is by Rick Brooks. As soon as I post today’s bloggy thing, I’ll send them $12.50 each.

After that, I’m out of the “cruel caricatures” business. Honestly, I think real photos of Trump are hideous enough.

Speaking of the Dumpster President, I saw and read some brouhaha on how his First Lady Melanie didn’t wear a head scarf in Saudi Arabia on their recent visit there. Apparently, when First Lady Michelle Obama didn’t wear a head scarf in Saudi Arabia, Trump said that was disrespectful or some such. Of course, Trump said one thing when it was the black president’s wife and didn’t say anything when it was  the racist white president’s wife. This wouldn’t have raised my ire in the slightest because it’s what I expect from him. But it does give me a chance to say this:

Fuck Saudi Arabia. The country is a key sponsor of terrorists and  should have been attacked by US forces before any of the countries we did invade. They are a repressive nation that got the free pass after 9-11 because they were sleeping with the Bushes and because they were wealthy and because they had oil. Good for Michelle and Melanie and any other woman who chooses not to kowtow to the Saudis penchant for restricting the rights of women in this and in so many other ways.

On a more cheery note, one of the things I love about my Facebook page is that I’m always learning new things. Yesterday was Herge’s birthday. He was the creator of Tintin, one of the greatest graphic album series of all time. When I posted a remembrance of Herge, I got a comment from my friend Lonni Susan Holland. She wrote:

[Herge] often drew himself into his stories, just as a passerby or face in a crowd.
I did not know that...and now I do. I’ll have to reread my Tintin albums and look for Herge in those wonderful stories.

I can’t recall where I saw the original discussions, but I recently came across comment threads asking comics fans and professionals to name their favorite Flash villain and who they considered the arch-enemies of other 1960s super-heroes. The term “arch-enemies” always brings a smile to my face. I picture evil fiends who force heroes to wear uncomfortable shoes. Inevitably, I also remember people I once thought of as my “arch-enemies” and chuckle at my ridiculous sense of drama.

My favorite Flash villain was always Captain Cold because he looked so...uhh...cool. His super-weapon was pretty basic and even easier to understand. Cold. I know what cold is. I don’t like cold. What else could the Captain be other than a villain. It took the X-Men’s Iceman to get me off the notion that cold was always bad.

Now, if you had asked me the most dangerous Flash foe, I would’ve answered Grodd. Because the Grodd of the comic books was one deadly monster. Physical strength. Scientific mastery. Mind control. The perfect mix of the seeming primitive with the terrifying advanced evolution.

As for the arch-enemies of the super-heroes and other adventures of the 1960s, that’s probably good for an entire bloggy thing or two. Sticking to the comics I read as a kid or a teenager, I’ll limit myself to a dozen characters or teams this time around.

There were characters who, as far as I was concerned, didn’t have arch-enemies. For me, Wonder Woman didn’t have an actual arch-enemy  until editor/writer Robert Kanigher did that run of stories meant to look like the stories of the 1940s. The Martian Manhunter didn’t have an arch-enemy unless you wanted to count fire. The best that Ant-Man could do was the Porcupine, though I confess I love the Porcupine.

I’ll revisit this topic in the future. In the meantime, feel free to send your own choices and comments. I’ll include them the next time I do one of these “odds and ends” columns.

I’ll be back on Thursday with a remembrance of Rich Buckler. I hope you’ll join me.

Posted by Tony Isabella at 9:25 AM