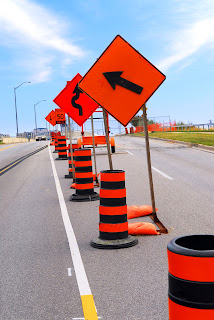 FantastiCon Lansing was a fun convention for me. However, sometimes stuff happens that is largely out of the control of such an event. Today’s bloggy thing is about that stuff.

My four-hour-plus solo drive to Lansing was far less than optimal, though not at bad as the return drive would be. There was lots of construction, lots of “phantom construction” (which my engineering son Ed tells me is the result of overly optimistic planning), bad drivers and even a missed turn when my GPS unit decided to take a nap at the worst possible moment.

Though I’m in decent shape, long solo drives are getting tough for me. I’m wondering if I should start offering free rides to Medina-area fans who want to attend these conventions. They’d be on their own for admission, hotel and the like...and they’d need to do some of the driving...but the ride itself wouldn’t cost them anything. Something to ponder.

There was no safe in my room, something I’ve had in every room I’ve stayed for the past couple years. I even had one in the small room I had when I attended the Luke Cage premiere in Harlem last year. It didn’t work, but it was there.

Other room complaints: poor water pressure, an extremely loud air conditioning unit and a loud bathroom fan that was activated when you turned on the bathroom light.

There was no actual restaurant in the hotel. I ate at the hotel’s bar on Friday night. The food was good - the best I had from this hotel the entire weekend - but it was just bar food and overpriced at that.

The hotel’s 24-hour snack bar was two vending machine in a room off the lobby. I ate a pastry from there and, well, let’s just say it might have been left over from Best Western.

There were a couple of fast food restaurants in walking distance. However, to get to them, you would have had to cross an eight-line road leading to the highway entrances. I could/should have gotten in my car, but I was exhausted from the drive to Lansing and didn’t want to move from the great parking spot I had. So that’s on me for being a lazy old man.

On the plus side, the hotel bed and pillows were very comfortable. Also, though the TV didn’t have a bunch of channels, it had good picture and sound. I watched episodes of Hawaii 5-0 and Rosewood, series I would watch regularly if I had time after watching all my comics-related shows.

This next “stuff happens” item was just a minor annoyance for me, but an annoyance all the same. My table was located near the booth of an indy publisher who was rather intrusive in promoting what he did. He would stand outside his booth and in the aisle, ambushing people with a spiel that was like the comics version of “Have you heard the good news?” and then repeating his well-researched speech to them. Once or twice, he actually blocked the path of fans as he stuck out his hand to introduce himself and his company.

Look. No one knows better than me that it’s a tough marketplace out there even when you’re published by a big company. I’m not going to fault the guy for being enthusiastic and his methods were helping him sell books. Heck, I might have even checked out his books were it not for his approach. Some of what he does seemed to be within my wheelhouse. But, after the seventh or eighth time of listening to his spiel and watching his intrusive approach, I had absolutely no interest in checking out his comics.

The guy’s got to do what he thinks he’s got to do. I would prefer he tone it down a few notches, but that’s not my call. What is more my call is that, in the future, I will ask convention promoters to put some distance between his booth and me.

There was supposed to be a “full food court” outside the convention ballroom. Remember: the hotel did not have an actual restaurant or an actual snack bar.

There was no “full food court.” What there was were hot plates set up in what was probably a drink station for events. It was staffed by less than enthusiastic servers. It served really horrible food. Really. Horrible.

On Saturday, I had a hot dog and fries. My reasoning there was that no one could mess up food I myself can cook. I was wrong. Both the hot dog and fries were cold. They started out tepid, but made their way to cold in a minute or two.

On Sunday, failing to get a clue from the vendors who were going to Wendy’s and other eateries outside the hotel, I ordered a slice of cheese pizza, reasoning that even cold pizza was eatable. I should have re-reasoned this when I saw how they kept their pizza “hot.”

Their pizza was in a box with a small heat lamp shining down on it. Not on the pizza. On the box the pizza was in.

My “cold pizza” theory also proved ill-conceived. This pizza was so bad it actually made me sick. It did not remain in my stomach for more than an hour, making its presence felt the whole time it was assaulting my stomach. Yuck!

He is a long-time comics fan. He is retired. He has suffered a loss in his life that breaks my heart. He was a Bernie Sanders supporter who hates Hilary Clinton with the kind of perverse mindlessness I will never comprehend. Faced with a choice of voting for Clinton or Donald Trump, he voted for the guy whose manner and positions were as far from those of his preferred candidate as the screen in front of me is from the planet Neptune.

He didn’t care Trump is a racist, a misogynist, a sexual predator, a con man, a crook, a egomaniac to the extent that I think he could be diagnosed as a sociopath. He didn’t care. He wanted to see what would happen when the country and the world went to Hell.

Americans are no strangers to frustration and pain. While I firmly believe it’s the Republicans who are the main source of both, the Democratic Party and the absurd third parties aren’t without fault either. But not anywhere near as much fault as can be justifiably laid at the feet of the Republicans.

Taking out one’s frustration and pain on those around you is not a mature response to frustration and pain. Which is exactly what this fan and others who voted for Trump did. You don’t want solutions. You want others to share your misery. You want ill-defined things to be shaken up and come tumbling down around everyone.

The fan’s frustration and pain were real. His response to them is unacceptable. He’s not an island and his choice have consequences beyond his own frustration and pain. Until Trump supporters accept the facts - the real news that their President denies whenever it’s not the reality he wants - and hold him and themselves to the very same standards to which they held President Obama, there will be no end to their frustration and their pain. Or for mine.

That part of today’s bloggy thing ran longer than I’d anticipated. I took a break between the previous paragraph and this one. Trying to decide if I should delete this encounter with the fan. And then I decided to do so would be dishonest.

From the start of this bloggy thing of mine, indeed, from the start of my writing for fanzines a half-century ago, I have always tried to tell it as I believe it to be. You have come to expect this of me. I expect it for myself.

So...no apologies or regrets for the above. I described everything I experienced and felt from that encounter.

Maybe one regret. I don’t know how to reach that fan and those who believe and feel and react as he does. I wish I did.

My FantastiCon weekend ended with a four-hour return drive back to Medina. It rained and stormed for three-and-a-half hours, sometimes dangerously so. My hands were sore for the next two days because I had gripped the steering wheel so tightly. During a particularly stressful part of the drive, I saw lightning hitting the ground not nearly far enough away from me for my piece of mind.

Later...on my Facebook page...someone remarked that having the creator of Black Lightning die by being struck by lightning would be a terrible occurrence. On most levels, I agree, but you have to admit that the creator of Black Lightning being killed by lightning would be a comics industry legend for all time. I suppose there are worse ways I could go.

The last half-hour of the drive was calm and comfortable. No rain and no storms. I got home safely. I saw my wife and my kids and my cat. I hugged them all. I was happy.

That’s all for now. I’ll be back tomorrow with a new installment of “Rawhide Kid Wednesday.” See you then.

Posted by Tony Isabella at 7:58 AM