IT WAS A DARK AND STORMY FREE COMIC BOOK DAY 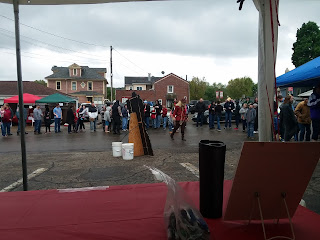 It was cold. It was rainy. Sainted Wife Barb, myself and the other guests were in tents in the parking lot at The Toys Time Forgot in Canal Fulton, Ohio. And we all had a wonderful time on Free Comic Book Day 2017. It’s one of those magical times of the year.

For anyone stumbling across this bloggy thing of mine for the first time, Free Comic Book Day is akin to Christmas for comics readers. You don’t have to deal with annoying relatives and right-wing jerks complaining about some mythical “War on Christmas” that only exists inside their damaged brains, but jolly old men and women and jolly young men and women give you free stuff.

Always held the first Saturday in May, Free Comic Book Day is the day participating comics shops across North America and around the world give away specially-produced comic books absolutely free to anyone who comes into their shops. There were over fifty such books produced by publishers for this year’s event. The comics shops do have to pay for these special comics, but the day is meant to thank their regular customers for their patronage throughout the year and to hopefully attract new customers to their business. Most stories hold terrific sales on this day. Many bring in special guests from the comics industry and elsewhere. It’s a big party. 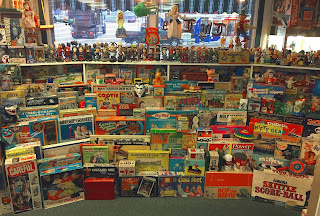 The Toys Time Forgot is located at 137 Cherry St E in Canal Fulton, Ohio. This wondrous establishment is literally packed with toys and other incredible items. It’s so packed with treasures there isn’t even room to hang a guest from its ceiling. There are already lots of action figures hanging from it. But, as it has a large parking lot, it sets up tents for Free Comic Book Day. This works out well when the weather gets on board with the event. Which didn’t happen this year.

Sainted Wife Barb and I arrived at Toys Time Forgot about an hour before the 11 am start of the event. The temperature was in the mid 40s and it was raining slightly. We decided to put off sitting in the cold for a bit and walked over to a local restaurant to get a bit of breakfast.

The Sisters Century House Restaurant is a great family restaurant with a lot of seating in a somewhat small space. It has a long and proud history, one which the current honors by providing a family friendly and friendly experience for its customers. All meals are prepared fresh. Our meals were delicious. We’re already planning a return visit on a warmer day to eat at the restaurant again and to see more of the charming Canal Fulton.

Back at The Toys Time Forgot...

Joining us under the big tent were  Matt Horak, current artist on Marvel’s The Punisher; pop culture artist Ed Griffie; and Shana Schottenstein, creator of The Color of Fire fantasy novel series. We were next to Matt. I enjoyed talking to him and checking out his work. Also braving the elements was Webster, the mascot of minor league baseball’s Akron RubberDucks.

In addition to his comics work, Horak is an artist for EarthQuaker Devices, an Akron-based maker of effects pedals for musicians. He even wrote and drew a comic book for the company, featuring heroes based on their products. He gave me a copy and I’ll be reading and writing about it in the near future.

Despite the chilly and occasionally wet weather, the fans came to Toys Time Forgot in droves. From before the official start of the Free Comic Book Day festivities at 11 am, they were lining up for their free comic books. Fans could take up to five comic books and sign up for a free raffle with prices ranging from original art to a Black Lightning action figure signed by good old Bloggy Tony to a fat bag containing all the FCBD comics.

There were great cosplayers in attendance and, if I figured out how to transfer photos from my new phone to this bloggy thing, you will see them right about now. Among them was my Facebook friend Riley Rivera as Poison Ivy. Given the nature of her costume, I think we can assume she has an extremely warm heart. 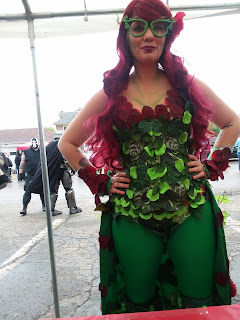 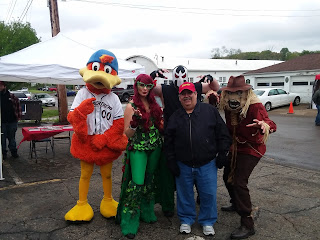 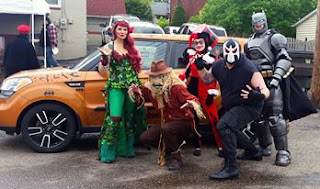 The fans could not have been nicer. I signed a bunch of comics and sold more copies of Black Lightning Volume One in four hours than I had the entire previous weekend. I answered questions about my work and comics in general. We chatted about our favorite comic books and comics creators. I delighted in their enthusiasm for the possibility of a Black Lightning television series, even though I couldn’t tell them it was a go at that time.

Barb had a great time as well. When she needed a break, she visited some of the shops in walking distance of The Toys Time Forgot. We will be checking out those shops more fully on our future visits to Canal Fulton. She enjoyed talking to the fans and the other guests. She didn’t even hit me when I referred to her as my “booth babe.” Is it any wonder I love this woman?

The Toys Time Forgot is an astonishing store that puts on a really first-rate Free Comic Book Day. My thanks to Dan and Jami and the rest of the store crew. It was a good time and we look forward to  coming back for many Free Comic Book Days to come.

I’ll be back tomorrow to celebrate Mother’s Day with my reviews of two Mother’s Day-themed horror movies. See you then.

Posted by Tony Isabella at 8:52 AM