MORE THURSDAY THIS AND THAT 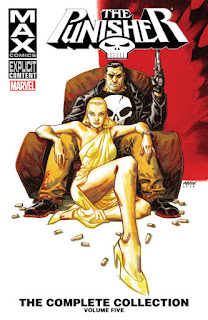 I like the Punisher best when he’s as far from the Marvel Universe as possible. In the Marvel Universe, he’s an illogical character, one who would have been captured by any one of the dozens of super-heroes invulnerable and powerful enough to beat him. In a universe of such super-heroes, the Punisher is a murderous joke and nothing more. Whenever he appears in a story with super-heroes, the writer demands the reader accept crazy coincidences and “plea bargains” to allow Frank Castle to hold his own and not end up being dragged to a maximum security prison. However...

The Punisher sans the super-heroes is a fascinating protagonist who can be used in all kinds of stories. You can do dark comedy tales. You can do gritty crime dramas. You can do stories of intrigue and political suspense. And all of that is why, though I wince when I see the Punisher next to Spider-Man or Daredevil, I get a kick out of reading the Punisher Max: The Complete Collection volumes that Marvel has been publishing.

Punisher Max: The Complete Collection Vol. 5 [$39.99] is a 504-page book that reprints Punisher Max Annual 2007, Punisher: Force of Nature, Punisher: Little Black Book, Punisher #61-65 and Punisher: Frank Castle Max #66-75. That represents a lot of carnage, even for such a thick tome.

Frank Castle is all over the map in these tales. He psychologically tortures a boatload of murderous criminals. He comes to the aid of a small Mexican town under the thrall of a mysterious and vicious drug lord. He uses a highly paid “escort” to get close to a mobster and changes the woman’s life forever. He’s poisoned and given six hours to kill an evil politician before he dies. He encounters a family of swampland cannibals that could have come straight out of a dozen horror movies. Finally, in a special series of five short stories, we see events that took place around the day when Castle’s family were slaughtered.

Punisher Max: The Complete Collection Vol. 5 is prime Frank Castle. It makes me all the more eager for the next volume. 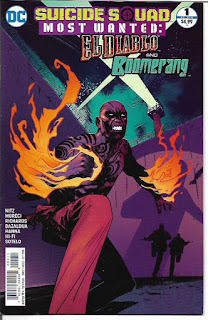 Suicide Squad is a comic (and movie) I’ll never be able to embrace. No matter how many writers try and fail spectacularly to cast the despicable Amanda Waller as someone just doing what is necessary to protect our country, not one of them has been able to convince me that she’s anything other than a murderous, ruthless sociopath. My idea of a good Suicide Squad story would be one ending with Waller  locked permanently in a horrible maximum security prison for life with no chance of parole. She’s a monster.

The “monster” moniker is one that can be hung on most of the Squad members. However, I am more than a little intrigued by the current version of El Diablo. In the movie, Chato Santana is a relatively sympathetic character despite his violent past as the leader of a drug gang. In the comics, not so much. But the movie Chato led me to the comic books.

This current comics version of El Diablo was introduced in a six-issue mini-series from 2008/2009. My first impression was that it was Marvel’s Ghost Rider in New 52 drag. Chato didn’t strike me as sympathetic and, as El Diablo, he went where his “curse” took him and killed who it told him to kill. Okay, yeah, he managed to save the world from supernatural destruction, but I never saw him as a man - hero or villain - in command of his own life/death.

Which brings us to Suicide Squad Most Wanted: El Diablo #1-6 [$4.99 per issue]. The exact title of the series changes depending on the book’s second feature. It was Boomerang in the first two, Killer Croc in the middle two and the vile Amanda Waller in the last two. Written by Jai Nitz, who also wrote the 2008/2009 mini-series, the El Diablo serial in this title brought the character more in line with the movie version. He was more sympathetic. He was attempting to do the right things. He didn’t come off as a mindless avatar of either his “curse” or Waller.

My jury of one is still out on El Diablo, but I remain interested enough to keep tabs on him. Even if it means reading Suicide Squad and being disappointed issue after issue that Waller isn’t locked away for keeps. 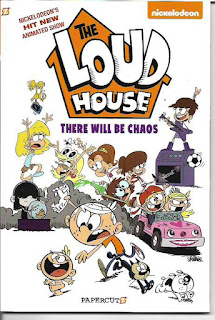 Created by Chris Savino, The Loud House is an animated television series that airs on Nickelodeon. Lincoln Loud is the middle child and only boy in a family of eleven children. The series debuted in May, 2016, and has been one of the top rated animated series on TV since that debut.

The Loud House #1: "There Will Be Chaos" [Papercutz; $12.99 for the hardcover, $7.99 for the softcover] is hitting the bookstores even as we speak. Papercutz sent me an uncorrected advance reading copy of the 64-page graphic album. Though I was completely unfamiliar with the show, I had no trouble whatsoever getting into these comics and the back story of Lincoln, his siblings and his best friend Clyde, an African-American lad who was adopted by his dad Howard and Harold. An episode of the series was nominated this year for a GLADD Media Award in the category of Outstanding Individual Episode (in a series without a regular LGBT character).

I got a kick out of this first Loud House book. Written and drawn by the same creators who do the TV series, it features ten stories of various lengths. Running through the book is an amusing choose-your-own-adventure-type domestic adventure. The book made me smile and, when I finally got around to watching a few episodes of the TV series, I was impressed by how entertaining the show is, even for a senior citizen like yours truly, and how closely the comic book stories match the quality of the show.

The Loud House graphic album is aimed at readers 8-12, but I think older readers will appreciate it as much as younger readers who are devoted followers of the animated series. I recommend it for fans of the cartoon, for older readers who like variety in their comics reading, for use as stocking stuffers when Christmas rolls around and, most especially, for public and school libraries.

I’ll be back tomorrow with the first of a series of holiday horror movie reviews. Because Mother’s Day is this Sunday and I am clearly a twisted individual. See you then.

Posted by Tony Isabella at 8:02 AM