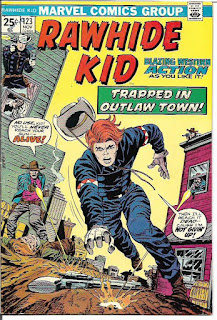 The Rawhide Kid is my favorite western comics character and one of my favorite comics characters period.  Something about the short of stature - but big on courage, honor and fighting skills - Johnny Clay speaks to me.  After rereading the Kid’s earliest adventures when Marvel reprinted them in a pair of Marvel Masterworks and an Essential Rawhide Kid volume, I wanted to reacquire every Rawhide Kid comic, reread them and write about them in this bloggy thing of mine. We’re currently in the extended twilight of the title. We’ve seen the last new Rawhide Kid story that will appear in the title, which is now a bimonthly reprint. This is the 110th installment in my “Rawhide Kid Wednesday” series.
The Rawhide Kid #123 [November 1974] had a new cover penciled by Larry Lieber with inks by Mike Esposito. The cover story is “The Prisoner of Outlaw Town” (13 pages) by Stan Lee and Dick Ayers. It originally saw print in Rawhide Kid #36 [October 1963] with a cover by Jack Kirby and Dick Ayers...and is reprinted without any cuts or editing. I wrote about this story in September of 2012 and you can read my comments here. 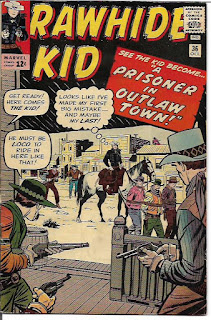 Notable among this issue’s classified ads is one for Jim Steranko’s Mediascene, described as a “bi-monthly color magazine devoted to action, adventure and fantasy in comics, films, TV and books.” You could get a sample copy for 75 cents on a year’s subscription for four bucks. I saw issues of this impressive publication, but can’t recall if I picked up random issues here and there or spring for a subscription. Here’s the ad: 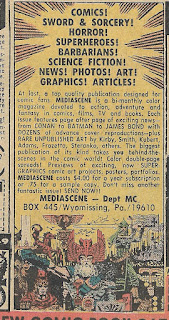 The Marvel Bullpen Bulletins page kicked off with a new installment of “Stan Lee’s Soapbox.” Stan plugged Spidey Super Stories, the new Marvel Superhero Calendar, and a new title. Nostalgia Illustrated was “Marvel’s joyous journey into the past.” I don’t know how many issues of that last one was published, but I’m certain I never saw a copy. My pal Steven Thompson wrote about it here. 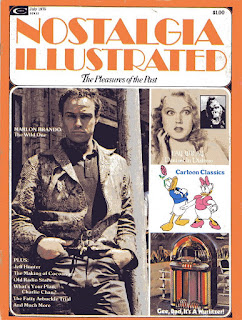 Much to my dismay, I was more familiar with another new magazine. Within his extra-length Soapbox column, Stan also wrote about “the first never-to-be-forgotten issue” of Hitler. He touted it as “the incredible picture biography of the fanatical Nazi furher whose hell-spawned racism and maniacal lust for conquest brought the entire human race to the bring of destruction.”

I never saw Hitler, but, as the editor of FOOM, I had to include a plug for it in the news section of that fan magazine. I swallowed hard and pretty much lifted promotional copy that had already been written. The problem came when a block of copy was left out of the news section. What started out as a news item on Hitler slid into a typical boisterous plug for one of Marvel’s comic-book thrillers. The effect was disconcerting, making it seem as if we were hyping Hitler as we would the latest Hulk versus Thing battle. Maybe all the proofreaders, including myself, were numbed by the idea of the Hitler magazine, but we all missed it. I still grit my teeth when I think of this stupid mistake.

After the Hitler stuff, Stan plugged “the mammoth-size Treasury of Spider-Man” - actually Marvel Treasury Edition #1 - which was ten by fourteen inches and 100 pages in length. He also mentioned the “long-awaited” Origin of Marvel Comics, which was being published by Simon and Shuster.

Roy Thomas takes over the Bullpen Bulletins for the final third-of- a-page column. After a paragraph about Marvel merchandise - that ad for the Spider-Man medallion coin is elsewhere in this issue - Roy starts dishing fun facts about Marvel’s creators.

The Marvel softball team plays every Wednesday during the summer. The stars of the team are pitcher Glynis Wein and Ron “Power Man” Wilson. The page features a small Marie Severin sketch of Luke Cage hitting the ball hard.

Herb Trimpe has been jogging through Central Park and is mistaken frequently for M*A*S*H star Alan Alda.

As for Roy, he is playing Postal Chess while hosting monthly poker games with John Romita, Mike Esposito, Sol Brodsky, Stan Goldberg and Al Milgrom. I wonder who the big winners were. 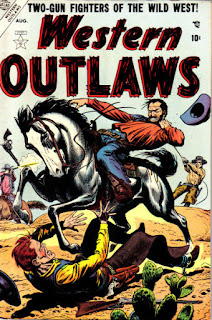 During the 1850s in the southern territory of Texas, travelers are being terrorized by Pancho Diablo. He’s a ruthless bandit who isn’t shy about using dynamite to stop trains so he can rob the people on them. He’s also not shy about killing people.

The United States Cavalry makes catching Pancho Diablo a priority, but his hit-and-run tactics keep him free. Pancho lives it up and delights in tormenting the frail Pedro, one of his gang members. He calls Pedro a coward, but the henchmen is determined to prove that he is not a coward.

Diablo continues his attacks, punctuating them with dynamite. With the aid of scouts like Pedro, the bandit continues to avoid those searching for him. But, when Pancho fears Pedro’s barking dog will give them away, he shoots the animal.

The dog was Pedro’s only friend. He leaves the hideout and returns with the Americans. To prove his courage, Pedro enters the cabin. He’s carrying a lit bundle of dynamite. The bandits shoot him and the explosion kills them all. Pancho Diablo is dead.

“Pancho Diablo” is an okay story. It could have been paced a little more smoothly and would have been more effective if more space had been given to poor Pedro.

The story is followed by the Bonus Bullpen Page. It had the usual plugs for the FOOM fan club and the loathsome Marvel Value Stamps. It also had announcements of the Deadly Hands of Kung Fu Special, which did come out, and the first issue of the Iron Fist magazine that never came out. There’s also a plug for Crazy, the black-and-white humor magazine that outlasted almost all of Marvel’s black-and-white magazines.

The last editorial page in the issue is a full-page house ad for that Marvel Treasure Edition mentioned above. It’s proclaimed “The Greatest, Grandest Most Gigantic Comic-Book of All Time!” 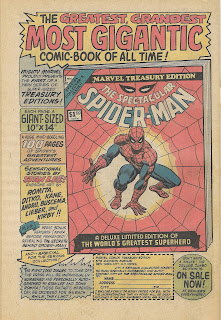 That’s all for this week’s installment of “Rawhide Kid Wednesday.” I’ve got a surprise for you next week and, of course, I’ll be back tomorrow with some other stuff. See you then!

Posted by Tony Isabella at 6:33 AM