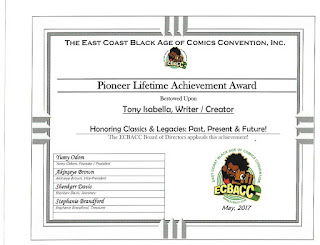 May 19. Friday night. Barb and Tony are at the TECH Freire Charter School for the East Coast Black Age of Comics Convention reception and kick-off. The Philadelphia event includes the presentation of the Glyph Comics Awards. Tony wrote about all that in yesterday’s bloggy thing...

The ECBACC Pioneer/Lifetime Achievement award was launched in 2004 to honor those men and women who have made innovative, dynamic and lasting contributions to the comics industry. Often unknown to the larger industry, they inspired and paved the way for others. Each year’s honorees are nominated by a select panel of comics historians, creators and fans. The panelists work independently of one another. That independence is key to the process, especially, since this year, a few of those panelists found themselves on the receiving end of the award.

Graham was the most prominent and one of the few African-American creators working in the comic-book industry in the late 1960s and early 1970s. He both wrote and drew stories for Warren Publications titles like Creepy and Vampirella and was promoted to art director of the line, becoming the first black art director in the industry. Moving to Marvel, he was a key part of the team that launched Luke Cage, Hero for Hire. He inked issues pencilled by George Tuska. He would co-plot and draw many other issues. He was the only member of the original team to be involved with every issue of the book’s initial 16-issue run. He also drew many issues of Don McGregor’s Black Panther run and McGregor’s Sabre. His intense and compelling artwork was instantly recognizable. He left us too soon, but his legacy as a comics legend and pioneer remains.

Next was my friend Don McGregor. One of the most original voices in comic books, McGregor made his debut with a series of outstanding horror stories in magazines like Creepy and Vampirella. Right from the start, McGregor included characters of color in his scripts. At Marvel, his Black Panther, Killraven and Luke Cage tales continued his clear commitment to diversity in comics. His Sabre graphic novel was the first graphic novel to be sold through the direct market. McGregor’s writing has lifted the spirits of his readers, demanded they confront equality with passion and understanding, and inspired dozens of writers and artists who rightfully credit him for showing them what comics can and should be. He’s a genuine pioneer who continues to fight the good fight.

When accepting his award, Don spoke of his friendship and several collaborations with Billy Graham. He talked about the characters, the stories and the struggle. Modestly, he didn’t talk much about himself, the man who brought those characters and stories to life, and who fought the battles for them.

For those of you who skipped over the image at the top of today’s bloggy, I was the evening’s third recipient of the P/LA. A. Dionne Stallworth, ECBACC’S resident A-V expert, which means both “audio-video” and, in her case, “awesome, very,” had previously recorded the Black Lightning trailer so it could be shown prior to my acceptance speech. The audience loved the trailer while I suddenly realized I had a tough act to follow.

I hadn’t written an acceptance speech per se, but, during our drive to Philadelphia, I had practiced one on Barb. More or less, here’s what I said:

Most of you already know my story. I was raised on the west side of Cleveland, which was a very segregated city. My first black friends were comic-book fans and I thought it was unfair that there weren’t more black super-heroes. If I ever got to work in comics, I wanted to do something about that.

Fairness. That’s what it was about for me. I wasn’t thinking about diversity when I worked on or created characters of color. I just wanted the comics world to be more fair. I never thought it would become one of the most defining things about my career, but I have been happy to embrace that.

I like to think I’m so “woke” that I have insomnia. The truth is: if you care about the kind of work I do, you never stop learning in your pursuit of our common goals. The work is important. It demands that level of effort and more.

I’m an outsider to this community, yet it has accepted me from the beginning. It has shown love, respect and support for me and what I do. You’re family.

Don McGregor presented the fourth P/LA of the evening to our friend Alex Simmons, who couldn’t be at this year’s activities because he was in Moscow teaching Russian children how to make comics. This was not Alex’s first trip overseas for this purpose. In many ways, he is our ambassador to the world.

Alex is a master of many trades: comics creator, playwright, public speaker, education consultant. He has won a Glyph award for writing “The Cartoon Life of Chuck Clayton” at Archie Comics. His Blackjack graphic novel series is a critical and popular success. At DC, he created Orpheus, who appeared in the Batman titles. He founded the NYC Kids Comic Con, which celebrates its eleventh anniversary this year. He’s a great friend and a great man.

Alex couldn’t accept his P/LA in person, but, thanks to Dionne, he had recorded a message from Moscow that was played at the ceremony. That was amazing on so many levels, not the least of which was that he was in Russia because of comics.

The next Pioneer/Lifetime Achievement award went to M. Asli Dukan, filmmaker, director, producer, editor and media arts educator. She is currently in post-production on the feature-length documentary Invisible Universe about the history and representations of Black people in science fiction and movies. Dukan wasn’t present at the ceremony, but her P/LA award was presented and accepted for her by Ariell Johnson, the owner/operator of Amalgam Comics & Coffeehouse in Philadelphia.

The final Pioneer/Lifetime Achievement award of the night went to author and historian Professor William H. Foster III. He’s written compellingly on comic books and popular culture for decades. Among his works is the landmark Looking for a Face like Mine (2005). He has been an expert commentator for CNN News, National Public Radio and the PBS series History Detectives. His research has been cited in the Encyclopedia of African American Popular Culture. I’ve known Bill for years and admire him for his knowledge, insights, passion and humor. He’s a dear friend and I was thrilled to see him receive this well-deserved honor.

Friends made the evening all the more special for me. Though I did not know him well, I did work with Billy Graham on some Luke Cage comic books. Don and Alex and Bill are close friends. Asli is one of my Facebook friends. To be honored alongside such great people is both humbling and wonderful.

ECBACC President Yumy Odom made the closing remarks for the night. Then the adventures began anew.

ECBACC called Uber to deliver us safely back to our hotel, a fairly quick and straight shot back down North Broad Street. Or not. Our driver’s GPS must have been out of whack because she took us thru some twists and turns through some sketchy neighborhoods. Though Barb and I were the first to leave the reception, we were the last to get back to the hotel. Thankfully, Barb and I would be driving  ourselves to the convention on the morrow.

From the hotel, we went out for a late dinner with Don and Marsha McGregor, Frank Lovece and Maitland McDonagh at nearby Barbuzzo, a Mediterranean restaurant in an area filled with interesting shops and other eateries. It serves small plates, intended for sharing. Barb had Tufoli (baby zucchini, spring peas, broccoli-lemon pesto, toasted hazelnuts, parmesan). I passed on the Grilled Octopus and, instead, had a nice serving of pasta with red sauce. The food was delicious, but the company and conversation was better.

It was 12:30 am by the time we got back to the hotel. Which was way too late for an old man like me on the night before a convention. Then again, I had the energy that surrounds ECBACC to draw upon for the Saturday events.

My ECBACC 2017 report will resume on Tuesday as I take care of some other business in tomorrow’s bloggy thing. See you then.

Posted by Tony Isabella at 8:28 AM