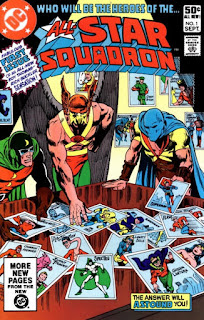 Comics creator Rich Buckler passed away last Friday morning. That evening, just before the East Coast Black Age of Comics Convention reception in Philadelphia, Don McGregor pulled me aside to give me the sad news. It wasn’t our place to announce Rich’s death at that event, but we talked about our friend privately more than once over the weekend.

It’s been difficult for me to decide what I want to say about Rich. Don was much closer to him and more recently than I was, so I know Don will have so much more to tell you about Rich than me. I also know there are fans of Rich’s that will be able to relate all the things he did in comics and beyond comics and, again, do so better than I could. But Rich was one of the first friends I made when I moved to New York to work for Marvel and made me feel welcome there and elsewhere. I’m just going to start writing now and see where it takes me.

I knew Rich’s work before I met him. I probably first saw that work in one of DC’s mystery comics or in one of the black-and-white mags published by Skywald. I particularly remember his work on “Rose and the Thorn” in several issues of Lois Lane...and on “Butterfly” in Hell-Rider #2 [Skywald; September-October 1971]. Butterfly was the first African-American super-heroine in comics, which is something that probably deserves further comment in the future.

Rich’s work had a strong Neal Adams influence in those early days, but Adams was only one of his influence. He was an admirer of Jack Kirby and that showed in his work as well. But, even though Rich’s influences might’ve been obvious, he always brought something else to the table, something uniquely Buckler. His work with McGregor on Black Panther and other features and stories are stand-outs in that regard, as is Deathlok, his own creation.

When I first went to work at Marvel, I was in a large office helmed by Sol Brodsky. I didn’t have a desk per se. My typewriter was on an artist’s table, which I’m sure has a name I can’t remember, and I had a kind of end table with drawers, which I’m sure also has a name I can’t remember. I do remember George Roussos, hidden behind file cabinets, shared the office with Sol and I, and there were a couple other artist’s tables in the office for when artists might need a place to work. Rich often used one of those other tables, which is how we met. 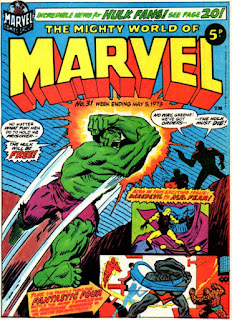 The first stuff we worked on together was a bunch of covers for The Mighty World of Marvel and Spider-Man Comics Weekly. These titles were weekly reprint comics produced in New York, but published in the general vicinity of Great Britain and for the British market. Our United Kingdom partners were forever switching printers on us and, in doing so, constantly forcing us to push up our deadlines. I never did get the hang of the scheduling, but Sol kept our merry little ship afloat.

Rich and I did two dozen of these covers in a fairly short amount of time. Because these were reprint books and I was working pretty far ahead of schedule, I already knew what would be in each issue. We worked on quick sketches - sometimes Rich would come up with the idea, sometimes I would - and then Rich would flesh them out a bit. The sketches were okayed by Stan Lee or Roy Thomas, usually without any changes. My memory is that Rich turned in the final pencils on all the covers within a week, two weeks tops. Mike Esposito inked them. They looked pretty good to me.

Rich did layouts for the second of the two issues of Doc Savage I wrote for Marvel. I’m sure we did some other Marvel stuff together - probably not full stories - but I never kept track of all those little odds and ends. I wish I had.

Later on, Rich and I did the one and only Man-Monster story for the brief return of Atlas Comics in the 1970s. I plotted, Rich drew and Gary Friedrich scripted. It’s a terrific looking comic book cover and story. 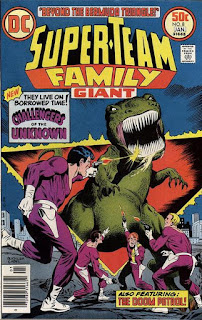 During my mercifully brief time as a DC Comics staffer, Rich did at least one Challengers of the Unknown cover for me. It’s one of my favorite things to come out of those few months.

That’s the comics stuff. Rich and I didn’t hang out a lot, but we had some meals together and saw some movies together. With Rich’s first wife, we saw The Omen. There was a Spanish-speaking woman in front of us who kept crossing herself while saying “Madre de Dios” (Mother of God) at the scary parts...and there were a whole lot of scary parts in that movie.

Rich’s first wife apparently thought I was marriage material. She arranged a double date with her and Rich and a friend of hers. She then took me shopping to make sure I looked nice for what I thought was just a casual date and ended up feeling like an audition to see if I was worthy to court the young woman. It wasn’t a comfortable evening for me, but I appreciated Rich and his wife making such an effort on my behalf.

Rich brought me over to Warren Publications editor Bill Dubay’s apartment for a game night. Bill was married to Rich’s sister. Bill wanted to get me to write and maybe edit for Warren, but, even though I liked him and thought it was a nice offer, I was too happy at Marvel to even consider a move. Later, when I wasn’t quite as happy, and probably at Bill or Rich’s suggestion, I had a meeting with Warren publisher Jim Warren. Jim offered me both the editorship of Eerie and all the writing I wanted. I was tempted, but turned it down. I had too many ties at Marvel. After the meeting, I ended up on better terms with Warren than ever. He’s one of the few comics folks that didn’t get angry at me when I turned down job offers from them.

I know the above stories might seem like they’re more about me than about Rich, but I’m working my way around to a point here. Besides being remembered for his great comics stories and art, Rich should be remembered for being a good friend to an awful lot of people in the comics industry.

Rich opened the door to careers in comics for many young artists, among them Denys Cowan, Arvell Jones, George Perez, Keith Pollard and more. He hired them as assistants, taught them the things he’d learned, often threw them into the deep end of the deadline pool and helped them become comics professionals. Rich was appreciative of the kindnesses done to him by the previous generation of comics artists and he paid it forward. 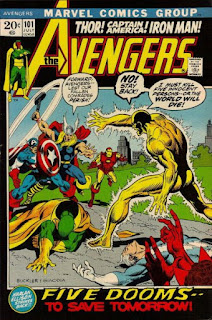 Someone close to Rich wanted to make sure he was never forgotten. He won’t be. His fans - like me - will remember their favorite Rich Buckler work. For me, that would include All-Star Squadron, Black Panther, Avengers and many others. During his career Rich drew just about every super-hero - major and minor - from DC, Marvel and a few other publishers. For those young artists he championed, Rich will be remembered for the knowledge and the opportunities he gave them. For his friends - like me - Rich will be remembered for those good times we had with him. Rich will be remembered and he will be missed. By the fans, by his students, by his friends.

Let’s raise a flagon of Asgardian ale for our friend Rich Buckler. He joins the hosts of comics talents who inspired him and he’ll be there for those who he inspired.